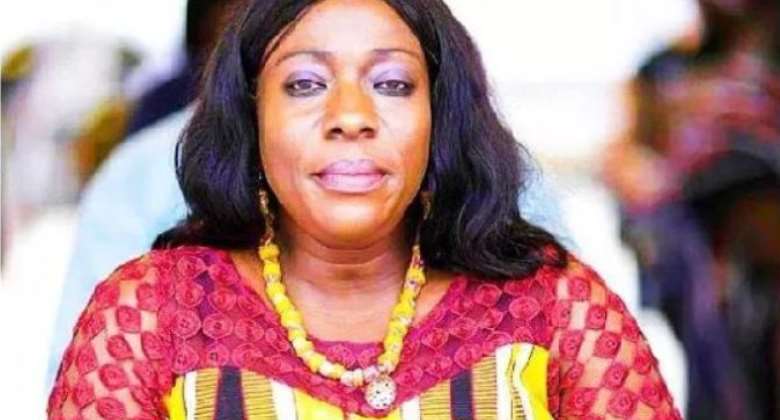 The Nsein Traditional Council has distanced itself from former Tourism and Creative Arts Minister and former Member of Parliament for Evalue Ajomoro Gwira Constituency Madam Catherine Afeku's claim that part of the Gh 200,000 cash were expended on the Nsein Kundum.

The Auditor General's report of 2018 released recently cited her for misapplication of funds whiles at the Ministry of Tourism and Creative Arts for Kundum Festival Celebration from the September 1 -9, 2018.

Madam Catherine Afeku in a media interview on an Accra based citi fm stated that the monies were not only used on the Axim Kundum alone but also spent part of the cash on the Nsein and Nkroful in the Ellembelle District Kundum Festival Celebrations.

But in a press conference held by the traditional leadership on Wednesday morning at the Paramount Chief's Palace of Nsein led by Awulae Agyefi Kwame II rubbished the assertion that it is never true that Madam Afeku expended on the Nsein Kundum.

"We the chiefs and people of Nsein Traditional Council are not aware of her claims since by tradition, our Kundum Festival Celebration is always held on the third week of September which was on the 22nd, 2018 and this is in contradiction to the Auditor General's report which cited that the misapplication of the funds were carried out from the 1-9 September 2018"

The Paramount added that is very weird and shocking to align the Nsein Kundum to an already expended money two weeks after her action and will not become party to the disgrace being associated as a result of the Auditor General's report revelations against Madam Afeku's conduct.

The Paramount Chief further maintained that the former Tourism and Creative Arts Minister Hon Catherine never doanted any cash to the traditional leadership of Nsein but only brought some Ghanaian Musicians, Awulae Agyefi Kwame II added.

He urged Madam Catherine Afeku to as a matter of urgency come clear on her defense of associating the Nsein traditional council as a witness to her financial irregularities she perpetrated during her time as a minister and leave the people of Nsein out of the mess she involved herself into.

We the people have no problem with Madam Catherine Afeku since I supported in 2016 which won and also played a key role prior to her appointment as a minister but latter betrayed and exposed into a ridicule and disgrace at the presidency.

Hottest Photo Reports
Catch up with all the political quotes from our politicians.
Advertise here
More Critics
ModernGhana Links
Response To National Security And Military High Command On Withdrawal Of Military Personnel From Speaker's Office
Speaker Bagbin's Drama Is No Longer Funny -Sir Obama
Absurdity In The Management of SDD-UBIDS
Omicron Variant Awakens the World to Vaccine Inequity, Racist Policies, and the Global Neglect of Africa
Minority MPs In Parliament Disappoints Their Constituents with an Unreasonable Own Goal
E-Levy Doesn't Discriminate
People of Upper East Region enemies of development, reasons why Upper West is ahead
Another episode in Ghanaian faux outrage: The case of the Do-or-die Affair
Corruption Fight: 78% of Ghanaians not confident in Akufo Addo rather than CDD's 62% - Economist claims
TOP STORIES