Oba Of Benin Speaks on the Return of Artefacts 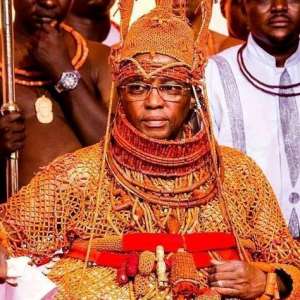 We reproduce here below a statement from His Majesty Oba Ewuare II, Oba of Benin, on the issue of the restitution of the Benin artefacts in which he clearly re-asserts the ownership of the Benin Monarchy in the Benin treasures. We have expressed our consistent view on the ownership of the Benin artefacts in several articles in modernghana.com. We once again call on the British Museum, London, World Museum, Vienna, National Museum of Ireland, Dublin, National Museum of Scotland, Edinburgh, Metropolitan Museum of Art, New York as well as all other Western institutions, still holding looted/stolen Benin artefacts to return them without further delay to the Oba of Benin, Benin City, Nigeria. Every minute they hold on to their illegal acquisitions, they violate the human rights of the people of Benin. They should follow the example of Germany and enter into discussions for the restitution of the stolen Benin artefacts.

Statement at the Meeting of His Royal Majesty Omo N’Oba N’Edo, Ewuare II, Oba of Benin with Palace Chiefs and Enigies on the Repatriation of the Looted Benin Artifacts.

In the name of God and our Ancestors, I welcome you all and thank you all for honouring our invitation. I have called this meeting today to intimate you of the matter of the Benin Artifacts in Europe at the verge of being repatriated which I am sure you have heard and read about in recent weeks.You may also have heard about the recent activities of a group of individuals who incorporated a company since January 2020 called Legacy Restoration Trust Ltd.

It has become germane to note that the advocacy and demands for the return of the artifacts looted from the Benin Kingdom in 1897 have been going on for decades before the emergence of the incumbent Governor of Edo State, Mr. Godwin Obaseki. I must sincerely thank the Governor for joining the struggle and showing commitment to retrieve our stolen cultural heritage from Europe.While anticipating the return of the looted artifacts from Europe, I want to note that attempts to divert the destination or the right of custody of the artifacts is not in the interest of the people of Benin Kingdom to whom the Palace of the Oba of Benin provides leadership.The looted artifacts awaiting repatriation from Europe are the cultural heritage of the Benin Kingdom created by our ancestors and forefathers within the traditional norms and rites of the kingdom.

They are not property of the state government or any private corporate entity that is not a creation of the Benin kingdom.The right and only legitimate destination for the artifacts to be repatriated as already pronounced by my father is under the aegis of the Benin Royal Museum that will be sited within the precinct of the Palace of the Oba of Benin from where they were looted, and also, the proper traditional institution that is also the custodian of all the cultural heritage of the Benin Kingdom.The Palace, therefore, strongly advises that anyone, group, organization, or government – national and international that is dealing with any organization or artificial group in the process of returning the looted artifacts from the Benin Kingdom would be doing so at their own risk and against the will of the people of the Benin Kingdom.

There is no alternative native authority and custodian of the cultural heritage of the Benin Kingdom outside the Oba of Benin as constituted by the Royal Palace. I do not believe that the move by a privately registered company, the Legacy Restoration Trust Ltd. and the purported establishment of Edo Museum of West African Arts (EMOWAA) are in consonance with the wishes of the people of Benin Kingdom.It is pertinent to note that shortly after my ascension to the throne I had several discussions with the Governor on the plan for the Benin Royal Museum and he expressed his readiness to work with the Palace to actualize this laudable wish of my father. I made efforts and acquired additional plots of land from different families within the Adesogbe area near the present day palace for this purpose.

I was however surprised to read from the Governor’s letter to the Palace where reference was being made to the fact that a new Museum to be known as EMOWAA is now being proposed, which will be funded and executed through the vehicle of another body now referred to as Legacy Restoration Trust.When Governor Godwin Obaseki informed me in his correspondence of another implementation framework using the so-called Legacy Restoration Trust and the Edo Museum of West Africa Arts (EMOWAA), my response was that the setting up of another organization or legal entity in whatever form or guise will not be necessary nor acceptable.

I informed him that Oba Ewuare II Foundation has been registered with the CAC and has worked out a framework for not only receiving the artifacts but also building a modern structure – The Benin Royal Museum – within the precincts of the Palace and that land has been secured for the building of the Benin Royal Museum under the supervision of the traditional institution. But for reasons best known to him the Governor has gone against the understanding, given recent events. As a matter of fact, the people of Benin kingdom and other stakeholders especially Benin Dialogue Group, had at different meetings endorsed the Benin Royal Museum to be built within the Palace, as well as endorsing the Oba Ewuare II Foundation for fund raising and other requisite administration processes.We wish to use this medium to call on the Federal Government to take custody of these artifacts on behalf of the Palace until the Benin Royal Museum is ready for their collection. Under no circumstances should custody of our age old artifacts be handed to any privately contrived entity like the Legacy Restoration Trust.

Thankfully just yesterday I spoke with the Hon. Minister for information and culture who is presently in Germany over the negotiation with the German Government over the plans for the repatriation of our artifacts he assured me that the Federal government remain committed to get unconditional return of our artifacts and will guarantee its full custody for their onward transmission to Benin kingdom to the exclusion of any unauthorized private entities or third parties, we once again thank the federal government for this commitment. It now behoves the Federal Government to be the only level of government that can take custody of the artifacts with a view to transferring them to their original owner and their original place of abode, more so that there exist international treaties and laws guiding these processes.

The Palace of the Oba of Benin wishes to advise His Excellency, Mr. Godwin Obaseki, Governor of Edo State to review his approach of using the private vehicle of the Legacy Restoration Trust Ltd and the Edo Museum of West African Art (EMOWAA) and to see how he can genuinely collaborate with the Oba Palace in accordance with our original understanding. We thank the German Government for their interest and willingness to return the Benin artifacts.

We pray to God and our ancestors for a fruitful resolution of this issue.

People who collapsed GN Bank three years ago had ‘Kerosene’ ...
25 minutes ago