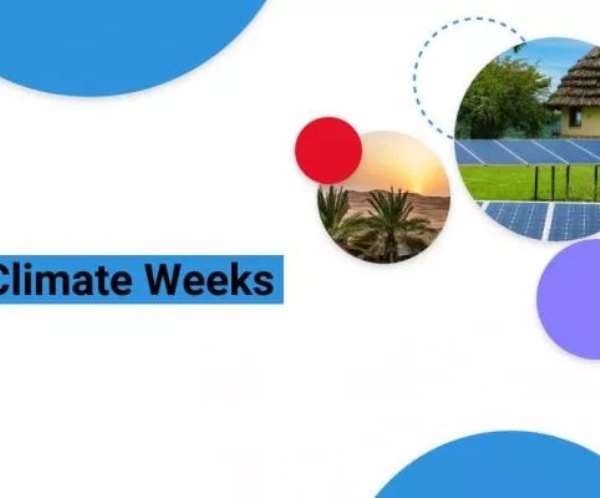 The Asia-Pacific regions emits more than half of the world’s greenhouse gas emissions and is one of the most rapidly developing regions of the world, with a significant proportion of the global population. And it is home to most of the world’s low-lying cities and vulnerable small island states.

At the end of the sessions, Ms. Keiko Segawa, Deputy Director General, with Japan’s Environment Ministry said: “The Asia-Pacific region should play a leading role for the world’s decarbonization and enhancing its resilience as a key driver of the world’s economic growth in the coming decades… Japan has committed to achieve net-zero emissions by 2050, lead the global efforts toward carbon neutrality, and accelerate concrete climate actions in the Asia-Pacific region.”

Speaking at the closing press briefing of the sessions, UN Climate Change Deputy Executive Secretary Ovais Sarmad said: “With COP26 in less than five months, we are at a crucial moment. Many nations are now in the process of developing new or updated Nationally Determined Contributions – the national climate action plans under the Paris Agreement. This year will determine if we can get on track to meet the goals laid out in Paris. APCW 2021 is held in a time of optimism and momentum, and collaboration here builds towards success at COP 26.”

Over three days, core organizing partners led discussions on themes that are crucial to address the world’s climate emergency:

On the final day of APCW 2021, the COP26 Presidency hosted a series of events in preparation for COP 26 in Glasgow in November. Ken O'Flaherty, COP26 Regional Ambassador to Asia-Pacific and South Asia, said: “'Climate Action in the Asia-Pacific region is key to limiting global warming to 1.5C. Countries across the region are already being impacted by climate change and will need to adapt and build resilience for the future. APCW provided an important opportunity for stakeholders to address the opportunities and remaining challenges to tackle climate change across a wide range of areas”.

The host Government of Japan convened governments at all levels, private sector leaders, academic experts and regional stakeholders. Around 3,700 people from 158 countries registered for the meeting, and more than 2,800+ participants attended a total of 139 virtual sessions.

The APCW 2021 High-Level Event will ensure that outcomes from the Virtual Thematic Sessions are captured and framed within the larger context of COP26.

Next steps to COP26 include the upcoming Africa Climate Week now scheduled for September and a High-Level Event anticipated in October.

Victoria KwaKwa, Vice President, East Asia and Pacific, World Bank, said: "During the Asia-Pacific Climate Week, we repeatedly heard that a shift to low-carbon economies must prioritize energy, land transitions, and integrate sustainability, social inclusion, and poverty reduction. At the World Bank, we are committed to helping countries prepare and implement actions to tackle climate change and achieve green, resilient and inclusive development.”

Dechen Tsering, Director, Asia and the Pacific Office, United Nations Environment Programme, said: “The need for stronger partnerships for overcoming the three plenary crises was highlighted during the Asia-Pacific Climate Week. We are the last generation that can stop climate collapse, mass biodiversity loss, and the pollution challenge. UNEP is committed to help countries in the region put climate ambition into action to deliver concrete results at COP26 and achieve our shared commitment to the Paris Agreement goals.”

Mr. Christophe Bahuet, Deputy Regional Director for Asia and the Pacific and Director, Bangkok Regional Hub, United Nations Development Programme, said: "Asia-Pacific Climate Week has shown us once again that inclusivity is central to effective and sustainable climate policy. At UNDP, we will continue to work with countries across the region to ensure that NDC implementation and enhancement includes the voices of all stakeholders, particularly those that are most marginalised and vulnerable to the impacts of climate change and create the space for all to be part of these much-needed climate solutions."

Ms. Armida Salsiah Alisjahbana, Under-Secretary General of the United Nations and Executive Secretary of UN ESCAP, said: “Building the momentum of economic and social recovery from the effects of the COVID-19 pandemic, countries in the Asia-Pacific region have this unique opportunity to move forward together in developing and implementing ambitious low-carbon national actions and economy-wide approaches, and redirecting financial flows to decarbonizing consumption and production, and enhancing nature-based solutions and rural and urban resilience. ESCAP is ready to support Asia-Pacific lead the race to net-zero 2050.”

Selwin Hart, Special Adviser of the UN Secretary-General on Climate Action, said: “This week has shown that there is much determination in the Asia-Pacific region to take ambitious climate action. But support to developing countries in the region is paramount so that they can accelerate the decarbonization of their economies and protect people and livelihoods from increasing and more frequent and catastrophic climate impacts. The US$100 billion commitment made by developed countries over a decade ago must be met. We have no time to lose. No effort should be spared to keep the 1.5 degree goal of the Paris Agreement within reach so as to prevent even more dangerous and deadly climate impacts in the Asia-Pacific region.

ABOUT THE REGIONAL CLIMATE WEEKS

Organized every year in Latin America and the Caribbean, Africa, Asia and the Pacific and Middle East and North Africa, the Regional Climate Weeks are collaborative platforms for government and non-Party stakeholders to address climate issues under one umbrella and unity of purpose. Bringing together diverse stakeholders from the public and private sectors around a common goal of addressing climate change is the primary aim of the Regional Climate Weeks.

APCW 2021 is hosted by the Government of Japan and organized in collaboration with global and regional partners – UN Development Programme, UN Environment Programme, the World Bank Group, the Asian Development Bank (ADB), the UN Economic and Social Commission for Asia and the Pacific (UN ESCAP) and the Institute for Global Environmental Strategies (IGES).

With 197 Parties, the United Nations Framework Convention on Climate Change (UNFCCC) has near universal membership and is the parent treaty of the 2015 Paris Climate Change Agreement. The main aim of the Paris Agreement is to keep a global average temperature rise this century well below 2 degrees Celsius and to drive efforts to limit the temperature increase even further to 1.5 degrees Celsius above pre-industrial levels. The UNFCCC is also the parent treaty of the 1997 Kyoto Protocol. The ultimate objective of all agreements under the UNFCCC is to stabilize greenhouse gas concentrations in the atmosphere at a level that will prevent dangerous human interference with the climate system, in a time frame which allows ecosystems to adapt naturally and enables sustainable development.