Back to sender or blessings to sender? 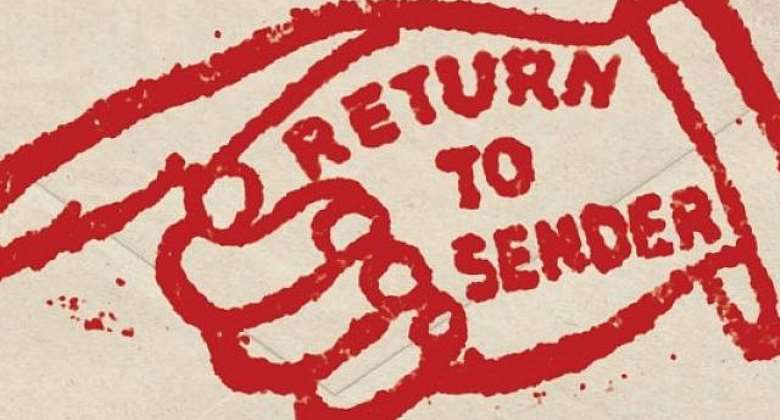 “But I tell you who hear me: Love your enemies, do good to those who hate you, bless those who curse you, pray for those who mistreat you” (Luke 6:27-28 NIV).

“Back to sender” seems to make sense. If someone curses you or plans spiritually to injure or kill you, or inflict diseases or sicknesses on you, destroy your career or business, impoverish you or otherwise harm you, and you have the power not only to prevent the outcome but also to reverse it back to the sender, what would be wrong with doing that? What would be wrong with giving the person the same dose of his or her own medicine? It sounds good, but it is not the best way for Christians to handle those who intend to harm us. “Back to sender” is an emotional response not supported by our Lord and Savior Jesus Christ. In the era of grace, mercy, and forgiveness, it does not advance the Kingdom’s goals for Christians to indulge in what amounts to “an eye for an eye.”

Let’s take a cue from our Lord and Savior Jesus Christ. As noted in the above-quoted Bible passage, Jesus wants his followers to love our enemies, do good to those who hate us, bless those who curse us, and pray for those who mistreat us. That’s a tall order!

As difficult as it is, Jesus showed by his own personal experience that it is possible. Here are two examples: A servant of the high priest accompanied the Roman soldiers to arrest Jesus at Gethsemane at night. One of the last healing miracles Jesus performed was to re-attach the servant’s right ear that was cut off by one of the disciples (see Luke 22:49-51). Many of us would have left the servant to bleed to death because it served him right since he had the audacity to be part of the team that arrested Jesus to be crucified. To them, it would have been consistent with the expression, “back to sender.”

Then Jesus asked this thought-provoking question: “Do you think I cannot call on my Father, and he will at once put at my disposal more than twelve legions of angels?” (Matthew 26:53 NIV). A legion is anywhere from 3,000 to 6,000, so more than 12 legions would be at least 36,000 angels. In any case, it is a very large number. The Roman soldiers in the garden would have been overwhelmed by the sheer number of angels backed by divine power. One obvious implication of this question is that Jesus could have asked God to send a very large number of angels to protect him from the arrest. Another, and perhaps more dramatic, is that Jesus could have asked the angels to fight and kill the soldiers and send their dead bodies back to sender.

Jesus demonstrated the second example on the cross. While bleeding slowly and painfully to death on the cross, Jesus prayed to God to forgive those who nailed him to the cross. Jesus gave them a pass and forgave them saying they did not know what they were doing even though they intentionally caused his death. Many of us with a tiny fraction of the power and authority Jesus had would have called for thunder to strike dead all those involved in his death; or for them to be afflicted with an incurable disease that results in a slow and excruciatingly painful death.

Both Apostles Paul and Peter affirmed what Jesus said that we should love our enemies, do good to those who hate us, bless those who curse us, and pray for those who mistreat us. Paul stated, “Bless those who persecute you; bless and do not curse” (Romans 12:14 NIV). On his part, Peter stated, “Do not repay evil with evil or insult with insult, but with blessing, because to this you were called so that you may inherit a blessing.” (1 Peter 3:9 NIV). These two pillars of the Christian faith knew what they were talking about, having endured more than their share of persecutions, hardships, and sufferings. They would fully endorse “blessings to sender,” not “back to sender.”

Interestingly, another good example of a physical manifestation of “blessings to sender,“ instead of “back to sender,” was handled by one of the ancient prophets in the Old Testament, Elisha, as recorded in 2 Kings 6:8-23 NIV. The king of Aram was at war with Israel, what was known as the Northern Kingdom of Israel with its capital in Samaria. (The other part of Israel was the Southern Kingdom, called Judah, with its capital in Jerusalem). Whenever the king of Aram planned any war strategy against Israel, it failed. The king of Aram was angry and suspicious thinking that some of his own people were traitors collaborating with Israel and leaking the information to them. It turned out that God was revealing the secret plans to Elisha who then told the king of Israel.

When the king of Aram found out, he sent chariots, horses and a strong army at night to arrest Elisha who lived in Dothan, a city near Samaria. When Elisha’s servant woke up in the morning, he saw that the army had surrounded the city, and he went to Elisha and asked him what they should do. Elisha told him, “Don’t be afraid …. Those who are with us are more than those who are with them” (2 Kings 6:16). Of course, Elisha was speaking about spiritual forces on his side since physically there were no soldiers guarding him or the city. Elisha prayed to the Lord to open the servant’s eyes and when He did so, the servant saw “the hills full of horses and chariots of fire all around Elisha” (2 Kings 6:17). May the Lord open our eyes and awaken all our other senses, as necessary, so that we can see, taste, smell, touch, and hear His divine presence and protection in our lives.

As the army got closer to Elisha, he prayed to the Lord to strike them with blindness and the soldiers became blind. Elisha led the blind soldiers to Samaria and prayed again for their eyes to open. When their eyes opened, they were in Samaria, right inside the enemy territory. The king of Israel asked Elisha whether he should kill the soldiers, but Elisha advised him not to kill them. Instead he advised him to give them water and food. They prepared a feast for them. After the soldiers had finished eating and drinking, they were sent back to the king of Aram, the sender.

Elisha and the king of Israel could have easily killed all the enemy soldiers who were sent to arrest and kill Elisha, and their dead bodies sent back to sender, but they did not do that. Instead, they sent their blessings to sender, the blessings of life and God’s hospitality. Sometimes, the best message is conveyed by deeds, not words. After that incident, the Arameans stopped their raids on Israel. Maybe, those who aim their diabolical weapons at us may stop after they receive our blessings.

We use the same mouth, mind, and energy to bless or curse. When someone says “back to sender,” he or she is sending a curse or bad wishes back to the sender. It makes sense to send a message back to the sender, but it should be blessings and good wishes, not curses. We know that God is able to turn a curse into a blessing, so we should ask God to bless. God did so when he turned a curse pronounced by Prophet Balaam against Israel into a blessing (Deuteronomy 23:4-5).

Our primary Christian mission is not to protect our lives and the lives of others from the devil at all costs, but to win and keep souls for Christ. Some of those souls may be willing agents happily doing the devil’s bidding. Others may be forced captives shackled in the devil’s camp and manipulated to do things against their will, including sending curses on people or attacking others spiritually. In whichever way people may find themselves in the service of the devil, they need to be liberated with love, compassion, and mercy. “Back to sender,” if successful in a broader sense, may cause their destruction and damnation instead of their liberation and salvation. Let’s aim our weapons of spiritual welfares directly at the devil, our real enemy, but tread carefully regarding our fellow human beings for whose sins Christ also died on the cross.

Jesus Christ rose from the dead. He lives. Jesus is loving, long-suffering, merciful, and forgiving. We, as his followers, should learn to be the same. We should strive to know and have the mind of Christ so that we can think and act like him (see 1 Corinthians 2:16). Moving away from the mindset of “back to sender” to “blessings to sender” would be a good start. Remember that vengeance and the battle are the Lord’s.