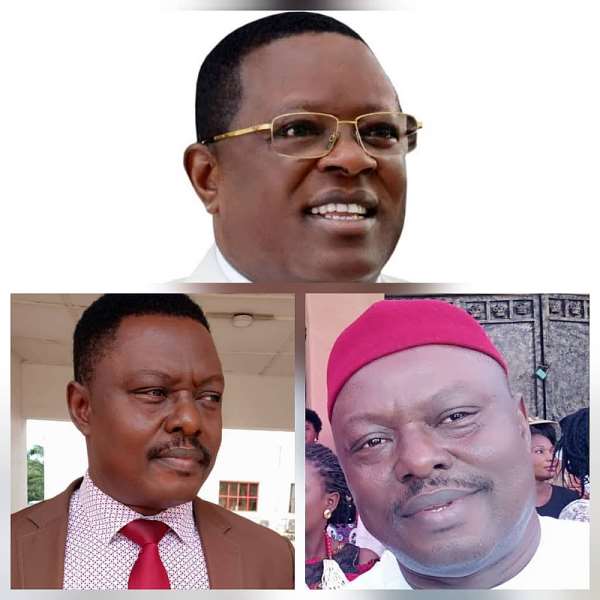 ... Describes his appointment as a reward for his patriotic spirit, zeal to excel, commitment, sagacity and ever ready spirit to improve on any task assigned to him

According to an age-long dictum, “God's time is the best in all things” and in line with the classical position of the Holy Bible, “there is time for everything under the sun”, nothing can obstruct the rising of a man whose time has come.

The appointment of Chief Emmanuel Obasi as the new Principal Secretary to the workaholic and most outstanding Governor today in Nigeria, His Excellency, Engr. David Nweze Umahi the Executive Governor of Ebonyi State and Chairman of the South East Governors' Forum has elicited rays of public admiration as commendations from people of all classes have continued to pour in.

While some hailed Gov. Umahi for the deserving appointment of Chief Obasi, others say the elevation of Obasi came at the very right time.

The fact remains that the appointment of Chief Obasi is a reward for his patriotic spirit, zeal to excel, commitment, sagacity and ever ready spirit to improve on any task assigned to him

In a statement made available to media houses, Chief Eze offered a chronological record of the education, religious, social and public engagements of Emmanuel Obasi.

Eze said Emmanuel Obasi had worked in both private and public service for over 25 years. Most of his public service life had been in the University System especially Ebonyi State University Abakaliki and Alex Ekwueme Federal University Ndufu Alike Ikwo from where he took Leave of Absence after the Confirmation of his Appointment to serve as Deputy Principal Secretary to the Governor of Ebonyi State in June, 2015.

He was President of his Umuobuna Youth Forum, Pioneer/Interim Chairman Uke-Etiti Umuobuna Forum as well as Chairman Federated Uburu People's Assembly, Abakaliki Branch for eight years and a member of the famous OHANIVO Clan General Assembly. Chief Obasi is also the Founder and Pioneer President of Ebonyi People's Assembly, a Non-Governmental Organisation concerned in good governance advocacy, as well as member of several other reputable local and international organizations.

An ardent Roman Catholic faithful and communicant, Obasi is the Grand Patron of St. Theresa's Cathedral Parish CYON; Patron of St. Theresa's Cathedral Altar Knights Association; Laity Star of Abakaliki Diocesan Laity Council of Nigeria as well as an Awardee of Onitsha Provincial Laity Council of Nigeria; He is Pillar of Encouragement to Abakaliki Diocesan Catholic Women Organisation as well as National CWO Merit Awardee in 2017 and a Jerusalem Pilgrim. Chief Obasi was the First Vice Chairman of St Theresa's Cathedral Council between 2008 and 2014. He is happily married with children.

On his political engagements, Chief Eze said Obasi cut his teeth in politics in his days at the University of Nigeria, where he held so many positions including: Pioneer Student Treasurer of SUG, UNN Enugu Campus, Welfare Officer SUG UNEC, Secretary General SUG, UNEC; Chairman Students Campus Village Development Committee; Chairman Students Union Joint Action Committee of University of Nigeria, Nsukka and Enugu Campuses as well as Clerk of Senate of National Association of Nigerian Students NANS and Chairman NANS Zone B.1994/95.

He narrowly lost his election bid into the House of Representatives in his quest to represent OHANIVO Federal Constituency in 1998, under the platform of the defunct Democratic Party of Nigeria (DPN), due to the massive electoral malpractices that marred the process.

In June 2015, Chief Obasi got appointed into the administration of His Excellency, Engr. David Nweze Umahi, as Deputy Principal Secretary. A position he held for six years within which period he served in many other capacities; Ag. Commissioner, Ministry of Solid Mineral Development and Supervisor Forum of NGOs, CSOs, Voluntary Organisations and Support Groups working with the Ebonyi State Government. Chief Obasi joined PDP in 2015 but moved with his Boss, His Excellency, Engr. David Nweze Umahi to the All Progressive Congress, APC, in 2020.

Describing him as a man of impeccable character, Eze said even in extremely challenging circumstances, Obasi had shown high degree of honesty, dependability and unquestionable loyalty and commitment to the cause in which he believes.

Expressing confidence in his competence capabilities, Eze said Chief Obasi has never failed in any assignment given to him and “we are very confident that by the Grace of God and with the needed support, he will not fail in his duties as Principal Secretary to His Excellency

Eze enjoined the good people of Ebonyi state to continue to support Gov. Umahi in his drive to reposition Ebonyi state and give her a pride of place in the comity of states.

Commending Gov. Umahi for finding Obasi fit to serve the state in his new capacity, Eze prayed God to continually direct the affairs of Ebonyi as the Governor and his team continues to break new grounds.