The spate of road accidents: Do we prioritise the lives of citizens over trivial expenditure? 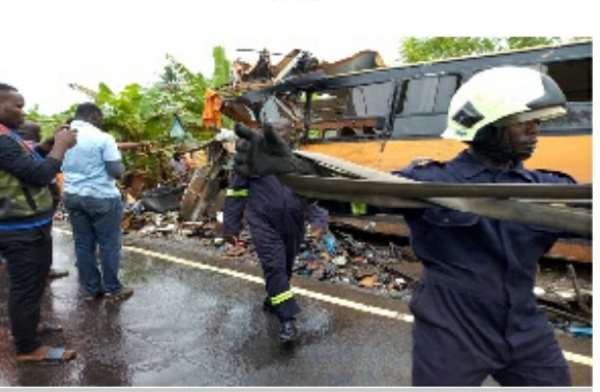 It's June 7, 2021 yet again gruesome carnages continue to wreck havoc on valuable lives of citizens active and developed enough in various fields of endeavour to contribute to the development of Ghana as well as people sustaining injuries at varying degrees, troubling enough to behold.

Yet again, 29 injured road accident victims find themselves in the Winneba Specialist and Trauma Centre following a motor crash at Gomoa Okyereko on the Accra-Winneba stretch while manslaughter of a gory accident perished two precious lives at Gomoa Dominase in the Central Region, police have confirmed.

The above illustration is a reflection of a picture that is bleak which gives no grimmer of hope as road accidents continues to decimate "fellow Ghanaians" with no modicum of mercy.

Only in the month of May, 2021, 216 persons perished in road accident whereas a whopping1,309 persons sustained varying degrees of injuries from road accidents according to the statistics of the Traffic and Transport Unit of the Ghana Police Service ( MTTU). From the same statistics, 1,250 valuable lives have been lost to road accident from January to May, 2021.

Situating this conversation within the context of #FixTheCountry and #FixYourSelf blocs may bring some clarity to the message this article seeks to put across to everyone who play one role or the other in furtherance of road safety to remedy this unfortunate phenomen.

Beginning from the frontier of #FixYourSelf, the point has to made vociferously that drivers are duty-bound to reach their respective destinations with their passengers safely and carefully driving, cannot be discounted in this pursuit. In this case, drivers ought to fix their attitude when driving.

Apart from the above, proponents of #FixTheCountry have solid case to make as it is not the duty of the citizens to construct roads and direct the authorities involved in road safety to bring sanity on our roads.

This brings me to one of the clichés of Twene Jonas that said that "3kwan no nyinaa y3 one way". To wit, all the roads are one way" essentially to mean that no vehicle bypasses the other from the opposite side of the road despite most of such roads are, at least two lanes. It is hard for one to like him due to the insults but the messages he carries along are development oriented.

The reference to his assertion above is relevant because it is in sync with the long held discussions on dualization of our major road networks to mitigate the spate of carnages to the barest minimum, if not completely deal with this albatross around our necks year in, year out.

If for nothing at all, the dualization will eliminate the following from the discussions on road accident. Firstly, wrongful overtaking with its associated head-on collision and its debilitating effects will become a non- issue because the vehicles would have been moving in one direction.

Also, the reflection if light on the eyes of drivers from on-coming vehicles at night will be reduced since the drivers are not driving on the same stretch of a one lane road as experienced on our major road networks now.

It is not as if successive governments including the current one is oblivious of this problem and its solutions because the fact that an attempt was made to dualize Accra to Kumasi road is evidential enough.

The lingering question is, what at all is or are the bottlenecks to actualizing this dualization of our major road networks to reduce, if not completely solve, this all-important road carnage problem that is depleting our work force?

The only answer to the question above is government's priorities. When the government was determined to build the National Cathedral, we are all witnesses to the urgency with which buildings at prime area of Accra were demolished for that purpose. The same energy is needed to bring desperate solutions to the carnages on our roads. #fixthecountry becomes indispensable in this regard, fix our roads.

Again, drivers have the onerous responsibility to drive carefully knowing the conditions under which they drive in this country because even if all our roads are dualized but they fail to drive carefully, accidents could still become rampant.

In the wake of the above, it is conspicuosly clear that the proponents of #FixTheCountry and #FixYourSelf are not mutually exclusive at any side of our development agenda, they are like two good friends who cannot do anything without the other.