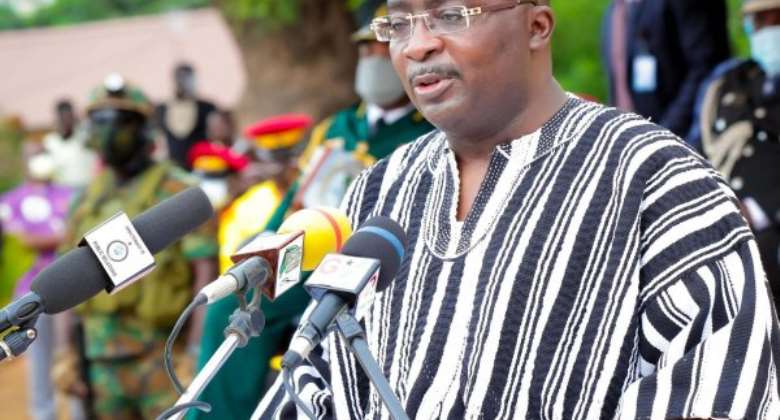 The Company, which becomes the 77th factory in operation under the 1D1F programme, started commercial production in April, this year.

It is expected to produce up to 6,000 metric tonnes of pineapple fruits into juice per annum, which translates to eight million cans of finished packaged products.

The Nano Foods Limited, a defunct ASTEK Refresh Pineapple Juice Factory, was rejuvenated with US$1.6 million capital support, through the Ghana Export-Import Bank (EXIM Bank) in 2018.

The capital support was facilitated by the One-District, One-Factory Secretariat, in collaboration with the Ghana Export Promotion Authority, Ghana Investment Promotion Centre, Food and Drugs Authority and Free Zones Board.

Vice President Bawumia, addressing the staff, management and key stakeholders of the pineapple processing factory, during the Commissioning ceremony in Duayedin, near Nsawam, said the Akufo-Addo-led government, through the EXIM Bank, would inject an additional two million dollars into its operations.

He was optimistic that the second phase of the Company's expansion would propel it for US$10 million annual turnover in the next two to three years and increase the staff strength from 100 to 300.

The Vice President said the 1D1F initiative was a major component of the 10-Point Industrial Transformational Agenda of the Government, which started in 2017.

So far, a total of 232 projects are at various stages of implementation, 76 factories in operation, 107 projects under construction, 13 are pipeline projects while construction has begun on 36 factories.

"The charge by the President is that we must move away from harvesters and exporters of low value unprocessed agricultural products, and we must do so in a hurry,” he said.

"Planting for Food and Jobs is our first step. 1D1F is the second step to linking agriculture and industry.”

"This is the way to enhance agricultural productivity, scale up production, add value to what we produce, create jobs, increase incomes, and improve livelihoods."

That, he said, was the way to build sustainable food security for the country, add value to raw materials and boost the value of Ghanaian exports.

"We can strengthen the links between agriculture and industry, stimulate investment in commercial agriculture, and open the pathways for accelerating national development and economic stability.

"Without doubt, if Ghanaians can capitalize on the numerous benefits of the 1D1F, it could be a game changer for the post COVID-19 economic recovery and transformation of Ghana," the Vice President added.

Dr Bawumia commended Dr Albert Owusu, the Founder of the Company, for harnessing the benefits of the 1D1F initiative.

He commended Mr Frank Anor Dompreh, the Member of Parliament for Nsawam Adoagyiri, who was instrumental in linking the company to the 1D1F Secretariat, Ministry of Trade and Industry and the EXIM Bank.

The Nano Foods Limited currently deals with 13 Pineapple Associations and Co-operatives in the Nsawam-Adoagyiri Municipalities and Akuapem South District.

These farmers now supply pineapple fruits to the factory, thereby increasing their income.

The factory has machinery that can process up to 6,000 metric tonnes of pineapple fruits into juice per annum, which translates into eight million cans of finished products.

It processes pineapple fruits from farms located mainly in the Eastern and Central regions for export to USA, Western European, and Middle Eastern markets.

There is confirmed demand for these pineapple products primarily from Spain, Hungary and Cyprus.

The project would improve the country's trade balance and foreign exchange reserves as well as contribute to Government's drive towards reducing the rate of unemployment in the economy.