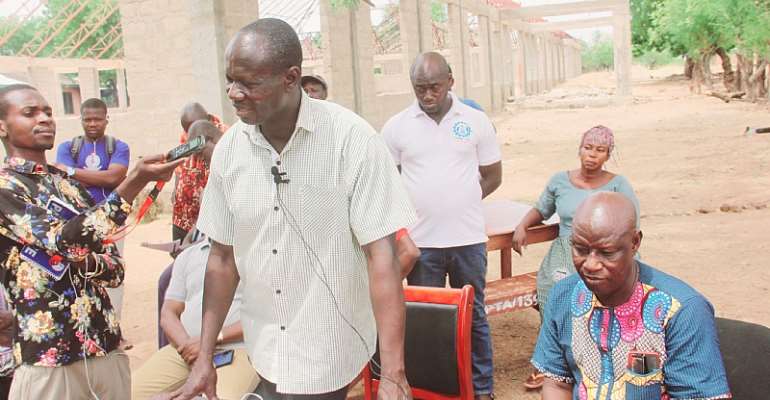 The headmaster and his staff of Kusanaba Senior High School in the Bawku West District of the Upper East Region are still operating under trees after a heavy rainstorm ripped off the administration block last month.

The rainstorm that started at about 4:30 pm Tuesday 22nd April 2021 and lasted about 30minute destroyed the school properties running into millions of cedis.

The school administration block, classrooms, some electricity polls within the campus, toilet, storerooms, trees, documents among others were all destroyed.

An ongoing dining hall project which started in 2016 was not spared either.

Speaking to Modernghana News reporter, the headmaster of the school, Daniel Abugri lamented that, he and his bursar continue to operate under trees hoping that philanthropists and good public-spirited individuals will come to their aid.

He said operating under the trees in this rainy season is challenging, disappointing and embarrassing. Moving documents, tables and chairs from one place to another is worrying."

Daniel Abugri also said transportation has been a challenge for him anytime he has to travel to the district capital for official duties.

He said the Old Mahindra which was given to the school since 2014 has broken down.

He said students and staff accommodation is a serious challenge in the school.

The lack of accommodation for teachers at the school has forced some teachers to live far away in the Kusanaba township.

The staff strength of the school is about 80 but only few are staying on campus due to lack of accommodation.

The Staff common room in the school is also small in size and can only contain 40 teachers out of the 80 teachers.

He added that students accommodation is also a challenge.

According to him, the standard boys dormitory which started ten years ago is left with 20% to complete but the contractor has abandoned the site due to delay in payment.

The headmaster students have no option but to make use of the uncompleted building.

Daniel Abugri said the school lacks furniture and dining hall tables. He added that in their own small way they have been able to procure some furniture. He however added that some classrooms will have no furniture if all the tracks are in session.

He said the school has no fence wall which has given way for movement of people and animals to graze on campus.

He said fencing the school will help stop students from sneaking out of the school and intruders.

John Amidini, Chairman, board of governance, described the situation as terrible.

He said the school was already suffering and the little infrastructure they have been managing has also been destroyed by a heavy storm.

He called on philanthropists and organisations to come to the aid by re-roofing the school before the rain sets in.

We can't continue to be naked, let's produce our own covid-1...
46 minutes ago