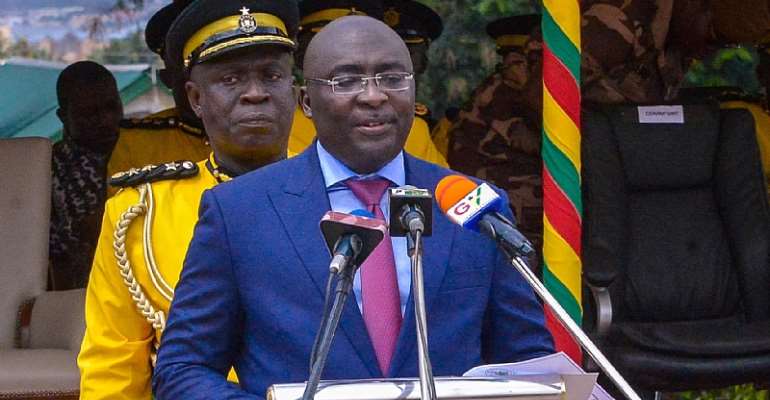 A quality of a true leader is the ability to inspire in times of despair and in times when followers seem to be on edge. Not only that, he should be seen in the field working with the followers to educate and dispel rumors when the need arises.

Ever since his nomination in 2008 as a running mate, Dr. Mahamudu Bawumia has at all times proven to be someone who rises to the occasion when the party and country needed him most. He does this wholeheartedly having no selfish interest whilst exuding the highest level of humility with love and respect for his boss President Akufo-Addo at the expense of vicious attacks from opponents.

In 2012 when the party lost elections, functionaries and leadership were distraught. Those who had hopes in an Akufo-Addo presidency someday almost lost hope that such a day would ever come. And the internal betrayers some of whom as usual are loud these days with criticisms had a field day. A major task ahead to be surmounted which was viewed by many as an impossible task was to prove that the election results was a stolen verdict. But for a party with notable academics and lawyers, who would rise to such an occasion?

With his deep analytical skills, Dr. Bawumia chaired the NPP technical analysis committee that was set up to critically review the election data to make a case for a petition. Dr. Bawumia not only performed his functions as head of the team but was deeply involved in reviewing and making copies of “pink sheets”. After assembling the evidence, another hurdle was how to present such data to party supporters and Ghanaians at large to assure them of the importance of such a petition. Again Dr. Bawumia in a convincing manner presented the data analyzed to party supporters and Ghanaians at the press conference to the admiration of all.

The toughest of all the hurdles was to find a star witness to lead evidence in court. Dr. Bawumia with all the courage mounted the witness box and his sterling performance as a star witness as well as the intellectual submissions by the legal team saw the case of the party win the favor of 4 Supreme Court justices. And even though the party narrowly lost the case, his performance won the hearts of many Ghanaians setting the stage for a major comeback in 2016. It was this “comeback” spirit that Mahama and the NDC sought by going to court in 2020 but unfortunately for them they didn’t have a “Dr. Bawumia Technical Team” neither did they have a “Dr. Bawumia star witness”. Answers by their star witness Asiedu Nketiah who claims to have years of electoral experience ended up being reason for a dismissal of their petition.

With a defeat at the polls and court room in 2012/2013 and Mahama’s Government affinity to power by all means, many were those who wrote off the Akufo-Addo-Dr. Bawumia in 2016. A major strategy needed was to create an intellectual awakening among the electorate. During the period prior to 2016, Dr. Bawumia’s public lectures on the economy was the major headache for Mahama’s administration and electoral fortunes. His was not just mere rhetoric but his ability to surgically diagnose the problems and proffer solutions was what struck the deal.

On several occasions the NDC peddled falsehoods and tried to falsify what he said but it was always just a matter of time before the reality exposed them e.g IMF bailout. This earned him the title “economic prophet”. The NDC realizing how Dr. Bawumia posed a threat to their 2016 campaign sent attack dogs at him and even literally attacking him more than the NPP’s presidential candidate. However, the power behind those unmatched intellectual lecture series as well as the collective efforts of the campaign team proved to be too much for the NDC to handle and hence NPP won the elections by God’s grace.

In power and under the leadership of President Akufo-Addo, Dr. Bawumia as the head of the Economic Management Team (EMT) worked hard to turn the economic fundamentals of the country into one with an enviable global record. The sober testimony given by Hon. Yaw Osafo Marfo on the kind of hardwork and leadership exhibited by Dr. Bawumia as head of the EMT is inspiring.

He (Osafo Marfo) said: “...if one man has contributed positively to the performance of this current government, in my view it’s Bawumia”.

Yet these praises did not make him bossy and complacent. As the 2020 elections approached, the NDC under an intensive campaign sought to hoodwink Ghanaians into believing that they had performed better in terms of infrastructure as compared to the Akufo-Addo Government. With an era when fake news easily trends, this propaganda gained momentum. Dr. Bawumia through the monumental government project tracker at a public lecture smashed the propaganda of the NDC that nearly cost us a second term. This event proved to be one of the turning points in events leading to the 2020 elections.

Yet again, when in recent times the FixTheCountryNow campaign which others saw as an opportunity to push a sinister agenda to poo-poo the massive success chalked by the Akufo-Addo Government in just 4 years arose, Dr. Bawumia joined hundreds of grassroot supporters to defend the party and Government. He never saw himself too big to respond or join the footsoldiers to defend the party and Government. Rather, he saw it as an opportunity to defend the legacy of the Government he has served with all his heart. As usual in his characteristic humble and intellectual style, he beautifully set the records straight by providing incontestable data on what Government had done to FixTheCountry from the mess left by NDC and to assure citizens that Government is doing all its best to get the country quickly back on track following disruptions by Covid 19.

It is clear Dr. Bawumia remains unmatched and remains the greatest threat to the NDC as far as their hopes of coming back to power is concerned. His selflessness in serving party and Government deserves commendation and is exactly what the people of Ghana look for in a leader.

Your Excellency Dr. Mahamudu Bawumia, we the youth of the party wish to say a big “ayeeko” to you for always standing by Government and inspiring us in times when party people seem to have lost hope or are bullied into silence. We appreciate how you join us on the grounds to project the party and clear misconceptions that have the tendency of destroying the great success that your Government has attained for the country. We have nothing for you but to assure you of our unflinching support and to say that just as you are always there for us and the party, we will always be there for you. Thank you once again and stay blessed.

Your MMDCE list plagued by inequalities entrenched in the du...
40 minutes ago