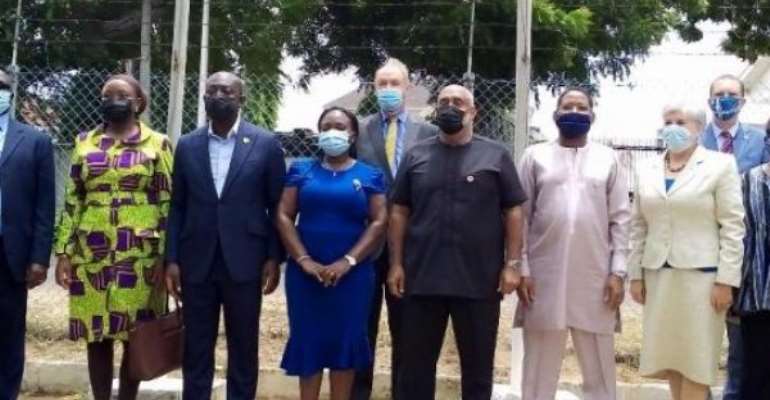 Mr. Yaw Boadu Ayeboafoh, Chairman of the National Media Commission (NMC) has urged journalists and media practitioners to continue to uphold high journalistic standards in the execution of their duty to maintain public trust.

“It is important for us all to acknowledge the fact that when we say that we want to see information as public good then it poses on us an obligation as media people to do what is right, do what is just and do what is fair. Anything short of that cannot be seen as a public good,” he said.

Speaking at a ceremony to commemorate this year's World Press Freedom Day in Accra on Tuesday, Mr Ayeboafoh lamented the lack of professionalism and misreporting in some sections of the media, a situation he said could undermine the successes chalked by the media over the years.

“Anyone who sees himself as contributing to the public good will always make sure that they do not peddle falsehood, that they do not concoct, that they do not lie because it is forbidden to lie as a journalist because if you lie about your neighbour it can kill him and that is the reason why people say that the pen is mightier than the sod,” he said.

The NMC Chairman said as a Commission, it was committed to protecting the media environment and to ensure that the media remained relevant and free.

He added that the Commission, in collaboration with the United Nations Educational, Scientific and Cultural Organisation (UNESCO), partners and the Ministry of Information was about to establish an office that would see to the safety of journalists.

This year's event was commemorated on the theme: "30 Years after the Windhoek Declaration: Information as a Public Good."

Mrs. Linda Asante-Agyei, Vice President of the Ghana Journalists Association (GJA), said the World Press Freedom Day must serve as a constant reminder to governments and the governed, as well as civil society organisations of the need to respect their commitment to press freedom and defend it as an indispensable tool for the advancement of freedom and justice and development.

She urged the citizenry to make it their business to provide credible information to the authorities or through the media when they had such relevant information for the public good, adding that “Regular, timely, proactive and sufficient information will eliminate the vacuum which gives room for misinformation or disinformation.”

She called for civility and respect for decorum in the discussion of all social discourse including; debates and dialogues to provide the relevant information to public.

Mr Kojo Oppong Nkrumah, Minister of Information assured the media of government's support to mitigate the impact brought as a result of the outbreak of the COVID-19 pandemic.

He explained that one hundred Right To Information officers had been recruited, trained and deplored by the Information Services Department of the Ministry and were currently functioning in ministries department and agencies across the country to assist persons who may request for any information.

The Minister said Government was also improving on regulation to analytical broadcasting and media publication to ensure that the high standards acquired over the years were maintained.

Mr Diallo Abdourahamane, UNESCO Representative to Ghana while calling on duty bearers to release information on time and be transparent, urged the media to be circumspect in their reportage to ensure national cohesion and development.

World Press Freedom Day is marked on May 3 each year by the UNESCO and various international groups, to raise awareness of the importance of freedom of the press and to remind governments of their duty to respect and uphold the right of freedom of expression enshrined under Article 19 of the 1948 Universal Declaration of Human Rights.