Book Review — ‘My Footprints in Ghana’s Black Gold’ by Dr. A Ofori Quaah 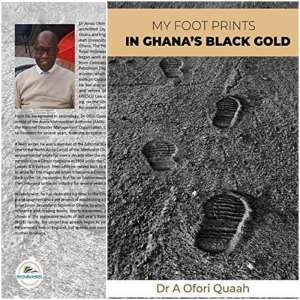 Back in the 1970s and 80s, there were various myths and fairy tales about the presence or absence of commercial quantities of oil and gas in the basins of Ghana, and this book by Dr. A Ofori Quaah published in July of 2019 sets its readers on an exquisite journey to put to rest the doubts, shining a light of reality for a better illumination.

Anyway, some of myths ranged from the notion that Nigeria was draining Ghana's oil and that all that Ghana needed was to buy powerful machines and begin to pump and drain her own, through those who believed that Ghana would never find oil until the gods of Nzemaland and the Volta Region had been pacified, to those who thought the Ghana National Petroleum Corporation (GNPC) Model Agreement was too harsh on contractors interested in oil prospecting.

Having been part of the formative group of the GNPC, Dr. Ofori Quaah set out to debunk those false theories and detail the technical work and sacrifices that went into making Ghana's oil find a reality. He begins from his humble background, having lost his father at a very early age. His family struggles, through secondary education with quite a few bumps, through his days in pursuit of academics at the Kwame Nkrumah University of Science and Technology in Ghana, Pennsylvania State University in America, to the University of London.

Dr. Quaah recounts his early industry experience at Phillips Petroleum Company in London, the advantage of going through several departments which gave him a solid grounding in geophysical data acquisition and processing, quality control and interpretation, as well as geology. These strengths would prove so crucial later as he supervised and or processed every seismic survey the corporation embarked on in seventeen years.

In those seventeen years, Dr. Ofori Quaah mapped every basin in Ghana and recounts the very interesting experience of making the first-ever seismic map made in Ghana, by “borrowing” lead and colored pencils, and erasers from the stocks of his three-year-old son because such basic supplies, especially of good quality pencils, were difficult to find in the Ghana when he returned to in late 1984. These cool stories among others in the book give it a highly humane and relatable feel, you don't need to be an industry expert for your mind's eye to welcome and embrace the book…

An extensive mapping project he did of the Cape Three Points sub-basin of Ghana's Western Region in 1992 would turn out to be the major turning point of the whole offshore Ghana exploration effort. Fifteen years later, an American company drilled the first commercial oil discovery in the same area and within the same geological system he had predicted in 1992. He includes in this book a scanned copy of parts of the project report he had written on the project, which rekindles the controversy a few years ago, about the Cape Three Points discoveries.

The Doctor (PhD) reveals that he and other principal characters involved in the exploration program in the early days of GNPC never benefited from the oil largesse. Also, there were several young children who missed the presence and love of their fathers very early in their lives because their fathers had to travel on official assignments away from home in Ghana or overseas in dedication to this project. “For the sake of those children and their mothers, those unsung heroes and heroines, something had to be written down for posterity,” and this book tries to honor the hard work of such individuals according to its author.

In reference to the book Dr. Ofori Quaah also disclosed that he had been on a “spiritual journey by the grace of God, which included my involvement in the North Accra Circuit and Accra Diocese of the Methodist Church of Ghana, culminating in the establishment of a thriving church, the Immanuel Society, in the Airport Residential Area in Ghana's capital city of Accra“. There had been various disjointed accounts of the church's origins and growth and some people believed that the true history of Immanuel Society had to be written down for generations unborn.

He recounts a stubborn streak in his personality which landed him in a few sticky mud, the ups and downs of the seventeen-year journey at GNPC, a few travel woes in West Africa and other places and other exciting anecdotes. These eventful journeys culminated in his becoming Acting Chief Executive of the GNPC where he recounts in his book the painful near 97% redundancy which refocused the corporation to its core business of finding oil and gas for Ghana and the challenges along the way.

Amidst all that, Dr. Ofori Quaah was able to practice his seismology alongside his petroleum exploration work, traveling around the country as Chairman of the Geological Disasters Sub-Committee of the National Disaster Management Organisation (NADMO) of Ghana. One of his greatest regrets as outlined in the book is that the constant caution to develop Ghana “with respect for the environment and the laws of nature, especially the unbridled upward development of the country, fell on deaf ears and I believe Ghana is bound to pay a price for that disregard.“

The author currently lives in England, but spent a month yearly with his nonagenarian mother in Ghana until her passing late in 2019. He intends to continue to visit relations and friends in his native Ghana and to monitor and promote his evangelism and education projects there.

This book is highly recommended by TheAfricanDream.net due to its cool-readability and easy to follow relatable stories, not forgetting the historical education it provides on vital aspects of Ghana's oil and gas industry and other topics. To anyone who has an interest in the origin of Ghana's oil bonanza and why it should be applied judiciously for the benefit of generations unborn, please read click this link to purchase your copy now: https://www.amazon.com/My-Footprints-Ghanas-Black-Gold/dp/109610508X