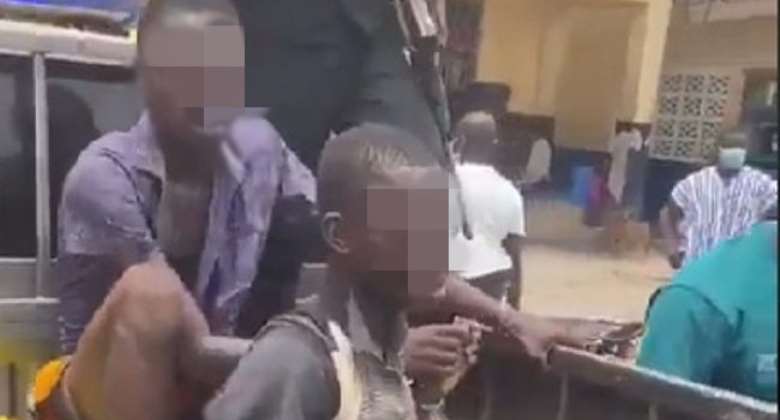 Charity Mensah, the traditional priestess who was arrested in connection with the murder of 11-year-old Ishmael Mensah has revealed that the two teenagers currently in police custody for their alleged involvement in ritual killing contacted her on phone to be perpetually rich.

She said the two boys, who were only in touch with her via phone, requested for “pocket no dry” charm.

Charity Mensah, made this known during police interrogation after her arrest earlier this week.

She was arrested alongside her errand boy, Desmond Nii Adjei, at Amanase near Suhum in the Eastern Region.

Citi News’ Anass Seidu said during interrogation, she did not say whether she demanded a human body for the alleged rituals.

“What they [teenagers] wanted was “pocket no dry” charm so that they will never lack money in their lives. According to information we [Citi News] picked up from the interrogations, she [priestess] told the boys that she could do it for them. There have been several phone interactions between one of the boys and the traditional priestess and the police have in their possession phone records of their conversations.”

“She is yet to confirm to the police that she directed them to bring human parts or a human being for the ritual,” Anass Seidu said.

The two teenagers still in police custody over the killing –Felix Nyarko and Nicholas Kini –have also alleged that the priestess was aware of the killing and went ahead to instruct them to bury the body of the deceased.

During interrogations, they said the priestess assured them that she will visit the place later at night with some aides to collect the body of the deceased for the ritual.

Charity Mensah is yet to confirm or deny that allegation.

Meanwhile, the priestess said to be a Beninois and a 2-week-old nursing mother has been granted bail.

Her Ghanaian husband and herbalist is reported to have fled with their baby.

But for the timely intervention of the Police in Suhum, residents of Amanase would have burnt down a shrine believed to be for Charity Mensah.

Angry residents led by the regent of Amanase gathered at the shrine on Friday morning in protest ready to damage the shrine.

This was their way of expressing their anger at the priestesses who they say has tarnished the image of the community after she was arrested on Wednesday in connection with the suspected ritual killing last week.

The regent of Amanase, Osabarima Obengfo Addo Agyekum, issued a three-day ultimatum to the Inspector General of Police and the police service to furnish them with updates of the arrest made.

“It is only now that we've understood the gravity of their activities to the extent of taking a life in the name of giving money to the youth for that matter.”

The 11-year-old boy, Ishmael Mensah, was buried yesterday, April 8, 2021, after he was allegedly killed by his two teenage friends at Atia Coca Cola in the Ga South Municipality.

The two teenagers, Felix Nyarko and Nicholas Kini, were earlier arrested by the Kasoa Divisional Police Command following the killing.

Earlier reports suggested that the incident occurred at Kasoa, but local authorities clarified that the area is located within Bortionor Ngleshie Amanfro in the Ga South municipality.

Latest Photo Reports
Catch up with all the political quotes from our politicians.
Advertise here
More Headlines
ModernGhana Links
I’m accused of money laundering when I travel because of anti-gay bill – Sam George
Scrapping E-levy will be difficult when collateralised—Prof Bokpin
US groups offered me money to drop anti-LGBTQ+ bill, they wanted sort me out for life – Sam George
Reforming 1992 Constitution: Abu Sakara charges NCCE to lead the way to get gov’t involved
45 years in ministry: Bawumia congratulates Archbishop Duncan-Williams for touching lives
You’re father to many; no wonder you're called 'Papa' – Bawumia praises Duncan-Williams on 65th birthday
Petrol, diesel, LPG prices to go up this week—COPEC, IES predict
NDC cannot support collateralisation of every source of future revenue; Agyapa deal must go – Mahama
‘We’re committed to protecting you from robbery attacks’ – Akufo-Addo to MoMo vendors
TOP STORIES

FDA, Police clamp down on tramadol abuse in Ahafo region
33 minutes ago

C/R: Man attacks girlfriend with machete; leaves her with cu...
40 minutes ago