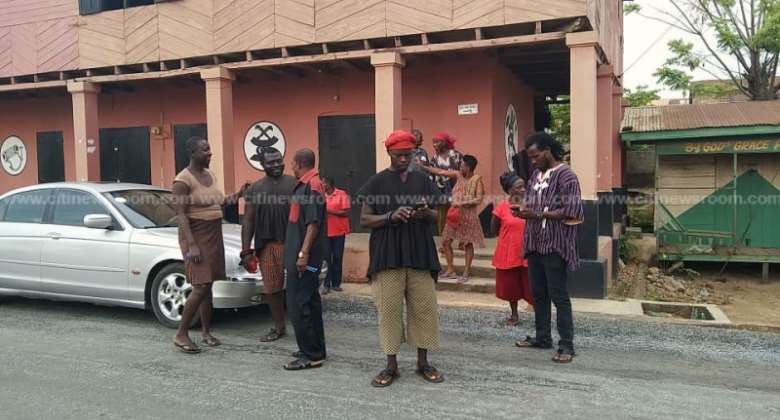 Police in Suhum have stopped angry residents of Amanase from burning down a shrine believed to be for the traditional priestess arrested over the killing of an 11-year-old boy allegedly for money ritual.

Angry residents led by the regent of Amanase gathered at the shrine on Friday morning in protest ready to damage the shrine.

This was their way of expressing their anger at the priestesses who they say has tarnished the image of the community after she was arrested on Wednesday in connection with the suspected ritual killing last week.

11-year-old boy Ishmael Mensah was buried yesterday, April 8, 2021, after she was allegedly killed by her two teenage friends at Atia Coca Cola in the Ga South Municipality.

Earlier reports suggested that the incident occurred at Kasoa, but local authorities clarified that the area is located within Bortionor Ngleshie Amanfro in the Ga South municipality.

The regent of Amanase, Osabarima Obengfo Addo Agyekum, issued a three-day ultimatum to the Inspector General of Police and the police service to furnish them with updates of the arrest made.

“It is only now that we’ve understood the gravity of their activities to the extent of taking a life in the name of giving money to the youth for that matter.”

“My children have shown that there is too much fear around,” one resident said to Citi News.

The Assembly Man of Kyekyewere, Paul Som Abedi, said the protest by the residents was justified.

“The whole world has heard bad news about Amanase… We need to be angry.”

“Fetish priests are all over the place in the whole district doing all kinds of things. We have to protest. It is a wake-up call for all the people in the district and the country as well.”