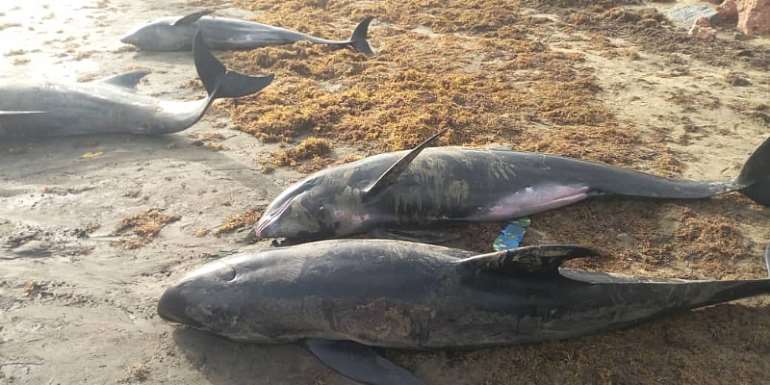 The Centre for International Maritime Affairs, Ghana (CIMAG) has followed disturbing news reports about the discovery of dead fishes and other aquatic mammals at Osu Beach in Accra and Axim-Bewire beach in the Nzema East Municipality in the Western Region of Ghana.

This is particularly disturbing because of the quantum of dead fishes and other aquatic mammals which have been reportedly washed ashore. For instance, in the Western Region, it is reported that the whale-like mammals which were washed ashore over the weekend were over 80 in total at the Axim-Bewire beach. It is important for the government to take immediate steps to ensure that the dead fishes do not end up in the markets for sale.

The Ministry of Fisheries and Aquaculture, the Environmental Protection Agency, and Fisheries commission together with the respective Metropolitan and Municipal Assemblies where these discoveries have been made must work closely with the relevant stakeholders in the fishing communities and industry to prevent the consumption of the dead fishes.

If urgent and concrete measures are not put in place, unscrupulous people will likely smuggle the dead fishes into the open markets and the nearby communities either for consumption or for sale to the unsuspecting public. The relevant authorities such as EPA, FC and MoFA must not only take steps to identify the cause of the fatalities but also ensure that the Ghanaian public is safe from consuming the dead fishes since the cause of fatalities is yet to be established. More awareness should be created via the media in the affected areas, especially in the local dialects.

According to the Citi Newsroom report on 4th April 2021, the tons of dead fish washed ashore on 3rd April 2021 at the Osu Castle Beach attracted many residents some of whom picked the dead fish either for consumption or for sale. This is certainly alarming and immediate steps must be taken by the authorities to ensure the retrieval of the dead fish from the homes of people and those that already ended up in the markets. The government must expedite the investigations to get to the bottom because this cannot be business as usual. The government must put in place adequate measures to protect and conserve our country’s water resources from all forms of pollution such as illegal fishing and mining activities.

Scientifically, it is established that several offshore activities such as reduced oxygen, infectious diseases and parasites, toxicity due to chemical spillage or contamination among other factors could result in fatalities in fish and other aquatic species as we have witnessed. This is not to draw any hasty conclusions into what happened even before the actual causes are established but just to share a general insight perspective on the issue. This is why the government needs to establish the actual cause of these fatalities.

Ghana’s per capita consumption of fish according to FAO stood at 25 kg per annum in 2016 which was even higher than the estimated continental and world averages of 10.5 and 18.9 kg respectively. What is even worrying is that Ghana reportedly imports about 50% of fish and other fish products to supplement the local fish production in the country. This calls for strenuous efforts and commitment from the government to ensure that our fisheries resources are not completely depleted in the next few years since that will leave thousands of people especially the fisher folks completely impoverished.

The fisher folks are already overburdened with a high cost of fuel and other fishing equipment, therefore if the water resources are not adequately protected from all kinds of illegal activities, it is not only the fisher folks who will be disadvantaged but Ghana’s fish imports would also escalate, thus exposing more Ghanaians to excruciating living conditions.

Once again, we reiterate our appeal to the government to urgently collaborate with all the relevant stakeholders especially fisher folks and other dealers in fish products, the relevant local authorities such as the Chiefs, assembly members etc., to map out feasible strategies to prevent the consumption and smuggling of the dead fish and other aquatic species washed ashore into the nearby communities and markets across the country.

CIMAG is calling for a transparent group of both State and Civil Society Organizations -including fishermen -to establish the cause of the ongoing fish kills, to eliminate this cause, and to ensure the well-being of both our environment and public health.