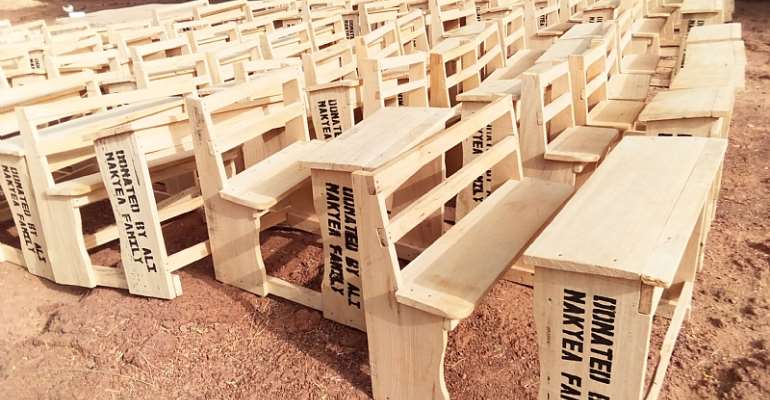 The maxim that one life transformed by education has the propensity to affecting generations, is manifestly true and can not be overemphasised.

The students of the focused and education driven community, Guo JHS, have an endless smile on their faces now as they sit comfortably on new furniture to better their handwriting and learn.

These students, sat on the floor and broken pieces of furniture to study ever since school resumed until the community put this smiles on their faces.

The literates of the community without any delay, upon realising the plight of their wards, started contributing towards this procuring furniture to salvage these students from going through that mess.

Fast forward, a very committed and loyal family from the community spearheaded the production of all the furniture. The Nakyiere family led by Mr. Seidu Ali Nakyiere is one of the families in the community that has its name inscribed on the development progress being made by the community.

This same family single-handedly procured two hundred (200) dual desks for the pupils in Guo primary school who were equally lying on their stomachs to write in 2018. This year, Mr. Seidu Ali Nakyiere and his younger brother, Dr. Abdellah Ali Nakyiere procured eighty-four (84) furniture for the students of Guo JHS.

Our most revered and development-oriented chief, Naa Gongyang Kelle Joseph, and his industrious sectional chiefs together with their constituents were present to grace the presentation programme. The Municipal director of education and her entourage were also present. Other dignitaries present in the programme were the Imam Alhaji Tijani, the Catechism of Our Lady Of Nativity Church. The teachers were also present.

The chief in his speech acknowledged the previous contribution the Nakyiere family made to this community as I indicated above. He commended them for chatting the path for others to follow. He used the opportunity to inform the community about the ongoing contribution intended for the furniture and added that the said contribution will be channelled into other developmental areas in the community. Naa Gongyang Kelle Joseph finally made a clarion call on sons and daughters of Guo to follow the footprints of the Nakyiere family so that we can collectively and in unison, develop our community.

The headmaster, Mr. Tiewul Vitus excitedly commended the chief and his people for their magnanimity. He acknowledged the myraid of educational development projects executed by the community through the chief. He mentioned the computer laboratory, the computers, a library, Dagaare teacher among others as some of the community initiative projects.

He used the platform to update the community and the director on the numerical strength of the school as well as the its performance and challenges.

He said the school has a total enrolment of one hundred and nineteen (119) students.

He appreciated the instrumental role the director of education played to get the school eight (8) professional teachers, one (1) national service personnel and one (1) NABCO teacher.

Furthermore, the headmaster journeyed the audience through the performance of the school with regard to the Basic Education Certificate Examination.

He said Guo JHS ranked eighth (8th) in the Municipal out of thirty-seven (37) schools and ranked second (2nd) in the circuit out of seven (7) in the last BECE. He said that expect better results this year.

Mr. Vitus stated the following as their challenges:

First, he said absenteeism was a big headache to them. He added that school dropout was the next challenge they face in the school. Nineteen (19) out of the hundred and nineteen have stopped coming to school without any formal information from the parents.

Additionally, he called the director of education to help the school with the new curriculum materials for they have no single textbook to prepare their lesson notes.

The increasing level of indiscipline among students was most worrying and require drastic measures to mitigate it, he said.

Imam Alhaji Tijani loudly lauded the commitment of the community towards education. He said Guo is a community that is abundantly blessed with levelheaded and committed people who are ever ready to sacrifice for the community.

He acknowledged that he was in this community some time ago to partake in a similar exercise at the primary school.

He intimated that he was overwhelmed with the level of developmental projects the Guo community is undertaking and therefore called on teachers to keep the spirit of maintenance culture very high so that this furniture can last.

He again, called on parents to continuously pray for the illustrious sons and the entire Nakyiere family for invariably coming to the aid of these students.

The Assistant Director in charge of supervision Mr. Paul Kpaatig stated without mincing words that out of the thirty-seven (37) schools in the municipality, Guo JHS is the first school they have witnessed this kind of community initiative. He also affirmed being part of similar presentation programmes in the community sometimes ago.

He, therefore, re-christened Guo as LANGERE which literary means talk together and implied, Unite. He vehemently challenged the headmaster to organise the community next year by this time and invite the education directorate to come for updates on the outcome of students' performance as a result of this gesture done them by the community.

He again registered his displeasure regarding the less number of men present at the programme. He called on parents to be responsible in bringing up their wards and also asked that parents call back their dropped-out children to school.

Mr. Pual Kpaatig advised the youth to desist from the politics of division in our families, communities and municipality.

He said this is the first time he witnesses deep-seated hatred between brothers from the same family in Nandom politics. This, he said is retarding development because politics is meant to develop our areas and not division.

The municipal director of education, Madam Leonicia Langkpier, expressed her unending excitement for this great feat chalked by the community. She called on parents to wholeheartedly invest in their wards education because they are the next leaders of the community and country at large. She admittedly stated that the educational performance in the municipality is fast dwindling.

Madam Leonicia Langkpier stated that academic performance now is worst when they went through the analysis of previous and current results.

She added that it is embarrassing to find the Almighty Nandom at the bottom of the tables as the worst academic performing municipality in the whole of Upper West Region and last but second in the whole country.

Nandom was noted as the hub of academic excellence in some times past but has now gained the notoriety of academic dwarf in recent times. We can improve this if parents support the teachers to discipline the children, she intimated. Let's collectively and in unison make Nandom better as far as our academics performance is concerned, she called on parents, teachers and stakeholders.