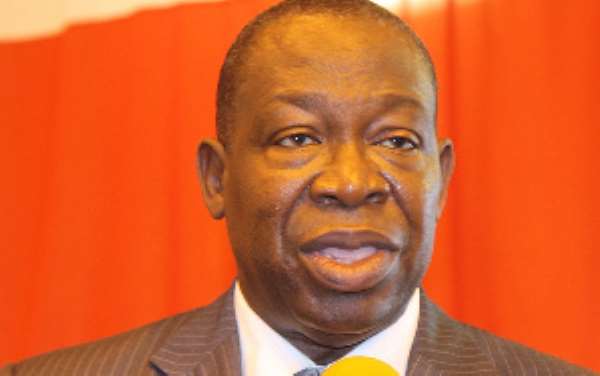 Mr Robert Joseph Mettle-Nunoo (Rojo), one of the two agents who represented the main opposition National Democratic Congress (NDC) in the Electoral Commission’s Strong Room (National Collation Centre), must bow his head in shame for abandoning his job to go an drink tea for three hours at the office of the Chairperson of the election management body, a former flag bearer aspirant of the party, Mr Stephen Atubiga has said.

“We are angry, we are upset. I mean, how can somebody go and sit for three hours in somebody’s office drinking tea and would not bow the head in shame but says: ‘I didn’t get biscuit’. I mean, you have an obligation, you left the room ajar”, Mr Atubiga chastised in an interview with Kofi Oppong Asamoah on Class91.3FM’s mid-day news programme, 12Live on Friday, 5 March 2021.

“Within the three hours that the man was sitting at the EC Chair’s office drinking tea, do you know what can happen within those three hours? Do you know what arrangements can be done? I’m talking about Rojo. Rojo sitting at the EC’s office for three hours, who was coordinating with him? So, the three hours, nobody called him from the campaign directorate, from Afriyie Ankrah and co., from John Dramani Mahama’s office, from Joshua Alabi as the campaign manager; nobody was making a phone call there monitoring and asking them questions? It means somebody was sleeping on the job and without disrespect to anybody, Joshua Alabi is the campaign manager for us, it is his responsibility to coordinate with the party and all sectors to make sure that we get victory”, he fumed.

In his view, former President John Mahama “won this election but our negligence started from our campaign manager’s office and then the irresponsible representatives that we had in the EC’s office”.

Rojo, who was Mr Mahama’s third witness in the just-ended election petition, told the Supreme Court when he was put in the witness box that officials of the Electoral Commission served him tea without biscuit, as he waited his turn to meet the Chairperson to lodge certain complaints to her about some qualms the NDC had with the collation of figures for the presidential election after the 7 December 2020 polls.

“I was served tea but not with biscuit”, the former deputy minister of health told the court on Monday, 8 February 2021, as he was being cross-examined by the counsel for the election management body, Mr Justine Amenuvor, who had put it to the witness that he was served tea and biscuit as he sought audience with the EC boss.

Mr Mettle- Nunoo also told the court that he was sacked by the EC from its Strong Room on the 9th of December 2020.

“The first time I left the strong room when the EC sacked me from the Strong Room”.

“That was the first time I left the room. The EC sacked me from the Strong Room”, he insisted, adding: “It has never happened before”.

In previous elections, he noted, “I stayed there for 72 hours”.

He reiterated: “In the early hours of the 9th, I was sacked from the EC Strong Room and I had to drive from Accra, all the way to Community 25, where I reside. This was around 2 am of the 9th. I then had to wake up very early and go through another two hours of traffic on that […] corridor, back to the EC office”.

“I left the strong room the second time to seek audience with the Electoral Commissioner. It was somewhere between 3 O’clock and 4 O’clock”, he mentioned.

According to him, “…As required by law, the Returning Officer, was also supposed to be an independent returning officer: to be fair, transparent and determine an election with integrity. So, under those three principles, I was asked to go into the strong room to defend his interest to the best of my abilities”.

“In the case of the NPP, you had Mac Manu, John Boadu and so many other people in the Strong Room, even though two people were supposed to have been in the strong room at a time. Why is it that they were permitted to be in the room?” he wondered.

He also denied threats that he had told untruths to the court. “That is absolutely untrue”, he said, adding: “I swore an oath to tell the truth and I told the court nothing but the truth”.

The longest-serving representative of any political party at the Strong Room also noted that he had, in the past, been sent by EC Chairs to his presidential candidate.

“It is not the first time. In my engagement with previous returning officers of the presidential polls, I have had occasion, to leave the Strong Room to go and speak to the person I was representing in the strong room and then I return with the understanding that I had been sent to do so and in this particular instance, I had also been sent to do so.”

“So, you want the court to believe that various chairpersons of the EC send you and you obey. Is that the position?” Mr Justin Amenuvor, counsel for the EC asked.

“As and when it was necessary to do so in order to resolve the issues”, Mr Mettle-Nunoo said.