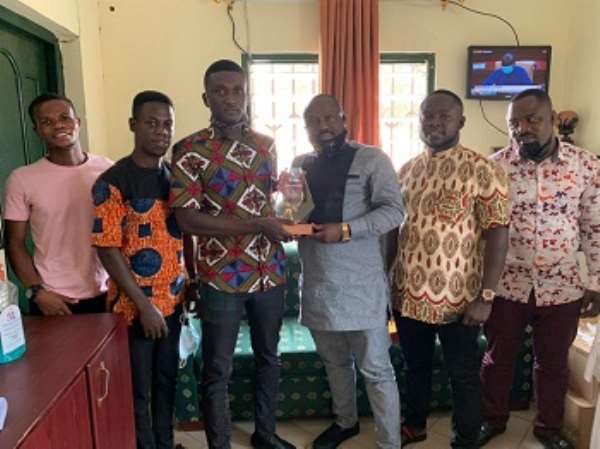 Alpha Patriots, a volunteer group of the ruling New Patriotic Party (NPP), has honoured its patron, Bright Botchway, for the pivotal role he played in ensuring the party’s victory in the 2020 general elections.

In a short, but impressive ceremony held at Agona in the Skyere South district of the Ashanti region on Friday, February 26, 2021, he was presented with a plague and a citation for his recognition for his hard work.

The Ashanti Regional Commander for the Alpha Patriots, Stephen Debrah, presenting the plague on behalf of the National Executives, acknowledged the selfless contribution made by Mr. Botchway before and during the elections.

“On behalf of the national executives, we honour you with this plague and citation for your selfless dedication towards the re-election of Nana Akufo Addo as president, especially in the Ashanti region, where party amassed greater votes,” Mr. Debrah said.

The citation, read, said “Our profound gratitude and utmost recognition for your dedicated contribution, enduring support and individual role towards our programmes and activities helping to secure the 2020 victory and re-election of his Excellency Nana Akufo-Addo and the NPP government”.

In expressing his appreciation, Bright Botchway, who heads the Driver and Vehicle Licensing Authority (DVLA) at Agona in the Skyere South district of the Ashanti region, thanked the group for recognizing his efforts during the 2020 general elections.

“I am excited for the recognition Alpha Patriot has given me, I am most grateful and humbled for this honour. I dedicate this honour to all the members of Alpha Patriots who supported me and had faith in me,” he said.

“There are hard tasks ahead of the group to ensure another presidential victory in 2024, I urge you all to work hard and propagate the good policies of the NPP if we the party to maintain political office in 2024,” Mr. Botchway charged the group.