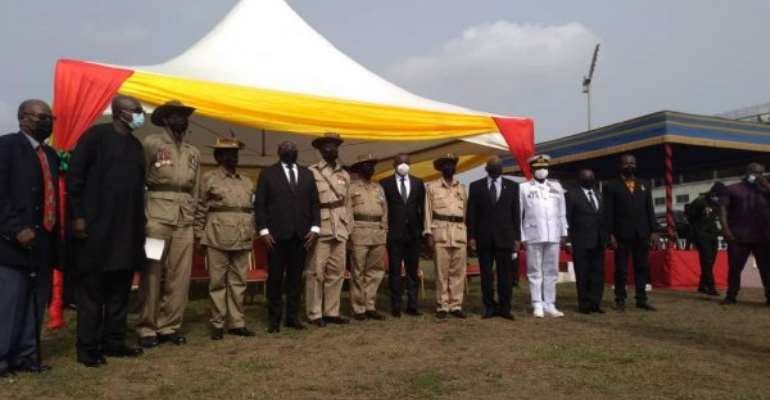 Vice President Dr Mahamudu Bawumia on Sunday laid a wreath on behalf of Government and the people of Ghana to commemorate the 73rd Anniversary of the February 28 Christiansburg Crossroads Shooting at the Nationalism Park, Osu, Accra.

The event is marked annually to remember the tragic killing of three ex-servicemen: Sergeant Adjetey, Corporal Attipoe, and Private Odartey Lamptey, during a peaceful march to the Christiansburg Castle on February 28, 1948.

They marched to present a petition to the British Governor about their unpaid allowances after returning from the Second World War.

During the Flag Raising ceremony, the last post was sounded in memory of the fallen soldiers, after which a minute silence was observed as well as the observance of the reveille.

History has it that after the Second World War, soldiers of the Gold Coast Regiment of the Royal West African Frontier Forces, who fought alongside their allied forces, demanded payment of their gratuity from the British Administration, but were refused.

As a result, the veterans decided to march from James Town to the Osu Christiansburg Castle to present a petition to the British Governor.

However, the British Superintendent, Mr Imray, ordered the shooting of the ex-servicemen to disperse them.

The news of their death spread rapidly, like wild fire, leading to looting of shops owned by the British in Accra and other parts of the country.

The incident galvanised momentum towards the independence struggle, which eventually led to the country's independence on 6th March, 1957.

WO1 Sarfo Kwame, a member of the Veterans Administration, in an interview with the Ghana News Agency, prayed that never again should such a heinous crime happen on the land.

“May the souls of the departed find peaceful rest with the Lord,” he said.

Quote Reports
Catch up with all the political quotes from our politicians.
Advertise Here
TOP STORIES