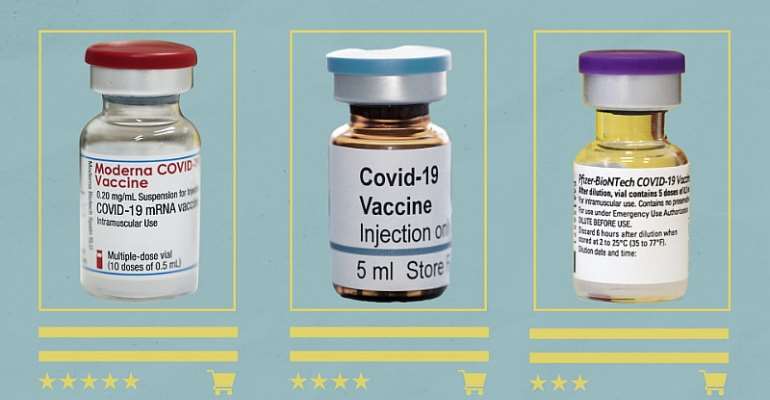 As wealthy nations horde COVID-19 vaccine supplies, Africa is lagging in the global effort to immunize people against the disease even as its fatality numbers spike.

Though Africa has 17 percent of the world’s population, it accounts for just 0.2 percent of the 209 million doses of COVID-19 vaccines administered to people across the globe. Meanwhile, the continent is experiencing a sharp rise in COVID infections and fatalities.

As of Feb. 22, some 2.66 million doses had been administered to people living in at least seven of Africa’s 55 countries, according to data from Bloomberg analyzed by Joy news.

South Africa President Cyril Ramaphosa, who is also chairman of the African Union, recently called on wealthy nations to make more COVID-19 vaccines available to the rest of the world. He criticized them for hoarding vaccine supplies.

“The rich countries of the world went out and acquired large doses. Some even acquired up to four times what their population needs … to the exclusion of other countries,” Ramaphosa observed during a virtual meeting of the World Economic Forum.

The European Union has ordered 525 million more full vaccinations than will be needed to vaccinate all its population, said Robin Cohen, a professor of development studies at the University of Oxford, after analyzing data from the Duke Health Innovation Center. The UK has ordered 65 million surplus full vaccinations, while Canada has ordered 156 million excess full vaccinations. Other wealthy nations have similarly ordered doses far in excess of what they need.

The African Union recently announced it has secured 400 million doses of coronavirus vaccines for the continent under COVAX, a World Health Organization initiative, bringing the total number of COVID-19 doses secured for Africa to 1.27 billion doses. However, it could take years before all those doses become available and at least 1.5 billion doses will be needed to vaccinate just 60 percent of the continent’s population.

Rising COVID-19 deaths in Africa
Africa has largely avoided the initial dire predictions that its weak health infrastructure would result in millions of COVID deaths. The continent accounts for only about 4 percent of the world’s 2.48 million COVID fatalities. However, the number of deaths has been spiking over the last few months. Data from the Africa Centres for Disease Control and Prevention show that in the nine months between February 2020, when the first case was recorded on the continent, and November 2020, Africa recorded 2.057 million cases with 49,412 deaths.

But the following three months saw total cases shoot up to 3.8 million. The death toll more than doubled to a total of 100,707. In other words, Africa has recorded as many COVID-19 deaths in the last three months as were seen in the first nine months of the pandemic.

Dr. Yaw Bediako, who is head of advancement at the West Africa Center for Cell Biology of Infectious Pathogens, wants to see a more aggressive COVID-19 vaccine roll out to protect the populace.

“All the evidence suggests this vaccine is not lifelong…That’s why countries are vaccinating thousands of people a day. Because if you do it quickly and do it hard, you break the back of the pandemic. If we trickle it out, we are throwing money away. So, we cannot stress it more that this has to be hard and fast and very, very efficient,” he told a Joy News panel discussion on the COVID vaccine rollout.

Africa’s COVID-19 vaccine progress
In Morocco, 2.57 million doses of the China-produced Sinopharm vaccines have been administered to 7.2 percent of the country’s population. Second doses will be required but only 0.1 percent of the population has received them. The country’s leader, King Mohammed IV, was the first person to receive the jab in late February. AstraZaneca/Oxford vaccines are also being administered in Morocco.

In the East African Islands of Seychelles, which depends mainly on tourism to keep its economy going, 65,567 doses of Sinopharm and AstraZaneca/Oxford vaccines have been administered. Nearly 46 percent of the population has received their first dose, out of which 22.5 percent have received the second dose.

In Egypt, just 1,315 doses of Sinopharm vaccines have been administered, with no second doses yet given.

Vaccinations have begun in Zimbabwe, with Vice-President Constantino Chiwenga taking the first shot of the Sinopharm vaccine on Feb. 19. “My ministry conducted all scientific processes to ascertain the efficacy of Sinopharm vaccine, which was confirmed to be 79 percent,” he said as he received his jab. “My presence here today with some Ministry of Health officials (is) to exhibit the government’s confidence in the Sinopharm vaccine.”

South Africa, which has the highest number of COVID-19 cases on the continent and has seen the emergence of a new, more aggressive strain of the virus, has also started vaccinating its populace. But only 23,059 people have received the single shot Johnson & Johnson vaccines out of the country’s 58 million people, according to the data from Bloomberg.

Other African countries, including Ghana, Rwanda and Equatorial Guinea, have received vaccines from India, China, Russia and the COVID-19 Vaccines Global Access Facility (COVAX), an initiative spearheaded by the World Health Organization to ensure equitable access to COVID-19 vaccines across the world.

Ghana this week took delivery of 600,000 doses of AstraZeneca COVID-19 vaccines made by the Serum Institute of India and plans to begin a national vaccination program next month. Acting Information Minister Kojo Oppong Nkrumah urged members of the public “to do your part by ensuring that you get vaccinated when the vaccine gets to you.”

Dr. Michael Owusu, a lecturer at the Department of Medical Diagnostics at the Kwame Nkrumah University of Science and Technology in Ghana, is vouching for the safety of the vaccines. “The vaccines are safe. Reports say there may be side effects including pains, chills, headache and fever, which will last for short durations, like a few days. They are similar to side effects from previous vaccines. The data doesn’t show we will have serious adverse effects like chronic illness and death,” he explained.

Referring to the popular AstraZaneca/Oxford vaccines, Owusu explained: “These vector-based and messenger-based vaccines are some of the safest vaccines you can find. We have taken much wilder vaccines like polio and yellow fever, which are weak viruses. And we were able to go through.”

“But if we have vaccines from a section of a virus engineered in the lab, it’s much safer. We have nothing to worry about. So, I don’t expect to see that people will take these vaccines and have serious effects. Because most of the information shows it’s safe because of the technology that was used,” he added.