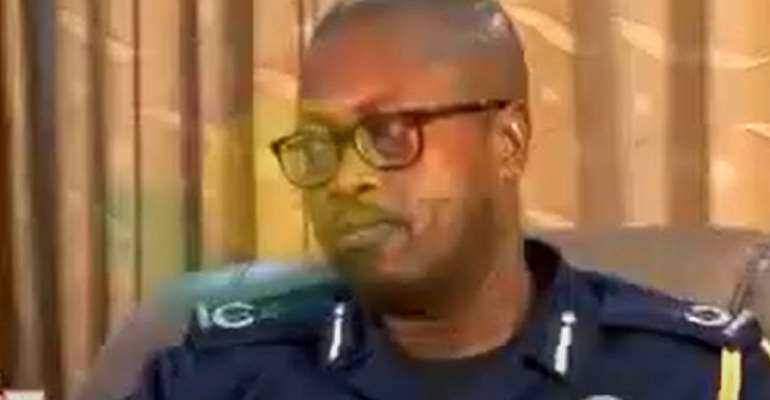 Wonders, indeed, will never end. In a shameless attempt to justify his support for the worldwide known Ghana police corruption, Commissioner of Police (COP) Nathan Kofi Boakye, alias Commander One, decides to rubbish some centuries-old Akan proverbs. COP Nathan Kofi Boakye for the last time I checked was the Head of the Legal and Prosecution Service of the Ghana Police. He has a postgraduate degree in Administration and also, he is a barrister at law.

One would expect him to live above reproach but unfortunately, he has come across not only as a defender of police corruption but himself a corrupt person. This fact is established by virtue of his pronouncements and actions taken in defence of the police corruption and in regards of the Kumawu chieftaincy dispute when he was the DCOP in charge of Ashanti region.

In seeing nothing wrong about police officers taking bribes from motorists on the roads, alleging that it is infinitesimal compared to other aspects of corruption as are perpetrated and perpetuated by politicians, traditional chiefs, heads of schools, etc., COP Nathan Kofi Boakye effortlessly but shamefully and unprofessionally, cited a number of time-tested Akan proverbs to support his defence of the Ghana police corruption.

He cited the following Akan proverbs to buttress his opaque viewpoint that the proverbs are even crafted to encourage corruption so we had better change them if we really wanted to eliminate corruption from the Ghanaian society. With such shallow-minded corrupt view by a Police Commissioner, it is only in Ghana and other equally corrupt third world African countries that he will be accepted to work as a Police Commissioner.

Let him come to the United Kingdom or France and see if he could be mounting unnecessary road blocks to collect one pound or one euro from each passing vehicle for his personal use without being arrested and prosecuted unlike it prevails in Ghana. The quantity of the money is not what matters but the fact that you are taking it in the first place, contrary to the laws of the land.

3. “Wo nsa akyi ye wo de a, nntese wo nsa yem”, thus, “The sweetness of the back of your palm cannot compare with that of the front”

5. Ese ne ketrema mpo ko, na won asan asiesie won ntem” meaning, “The teeth and the tongue even do fight but they later resolve their differences.

6. “Obi a 3repe adeE ak3 Kotoko no, yen nnye no abr3”, thus, “We do not sabotage he who is seeking wealth to be taken to the Asante Kingdom (home)”

How do the above Akan adages evince corruption as supposed by Nathan Kofi Boakye? How could our forefathers who were known to be truthful and trustworthy, lived with such corrupt practices if the adages indeed do encourage wrongdoings? Do we not say that our forefathers were not as sinful as their current offspring? Has Kofi Boakye never heard from his parents that in their days, if you went to farm and a neighbour’s trap has caught an animal, you remove it, put it aside, cut leaves to cover it and then go home to inform the owner?

The proverbs could be explained as following:

a. Even if you don’t like the village where you come from or your townsfolk, there is nothing that you can do about it. No matter how bad your family members are, you belong to that family hence you had better patch up your differences to get along much better.

b. No matter how bad your child may be, he/she is still part of you. The child is indispensable much as the head cannot do away with eye so you had better live in peace with your children, members of your family or townsfolk. When the head calls for the eye to burst, the eye still leaves its mark or scar in the head so why call for the damage of the eye in the first place even if you hate it?

c. It means, no matter how good an outsider is to you, the family blood running through you must always be respected. The proverb calls for family members or townsfolk to like one another and to live in peace and harmony. This reminds me of what one of my friends, Kwame Boafo (deceased), once told me about how he came to have a positive change of attitude towards his family members. He was always at loggerheads with his brothers and sisters and other extended family members. He was always fighting them and placing the needs of his friends ahead of his family’s. One day, he was arrested by the Kumawu police and placed in police cell for four days. None of his friends ever visited him during his entire period of incarceration. However, the family members he hated most and was always fighting them, visited him throughout his imprisonment, bringing food to him. When he got released, he had a change of mind. He began to love his family members more than his friends.

e. Family members, wife and husband, parents and children and townsfolk, do at times have disagreements between them. However, any fight or disagreement that occasionally transpires between them should not culminate in the truncation of the love or the bond that binds them together. The fact that the teeth occasionally bite the tongue does not make them bitter enemies to the point where they will decide to have nothing doing with one another. They sleep in the same cavity together, whether they fight or not hence they had better quickly resolve their differences.

f. If your family member, or a person from your locality, is prospering, you should not pray for, or seek, their downfall. You stand to directly or indirectly benefit from the prosperity of a member of your family or townsfolk hence it is always better to pray for their success.

From the above explanations given, how do the proverbs encourage corrupt practices as posited by COP Nathan Kofi Boakye? He had better not rubbish the time-tested Akan proverbs that had guided our ancestors and continue to guide selfless and rational Akans or Ghanaians to always aspire to do good, loving their neighbours as themselves.

Kofi Boakye is corrupt and a misfit in the police service, if I am not afraid to say. The fact that the police is the interface between the public and the law is not sufficient excuse for the police to be taking bribes from the motorists or the people. The fact that the money they take is in small quantities at a time does not exonerate them from blame.

Is it not the little drops of water that make the mighty ocean? The little sums of money they take at a time do accumulate into huge sums of money over a period of time.

The author has 2244 publications published on ModernGhana.

Stiffer sanctions needed to punish persons who engage in tax...
4 minutes ago