How Bobi's investment in outrage paid off and made him look great! 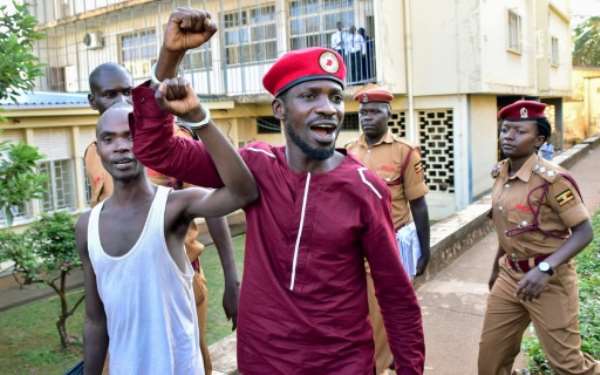 Most Ugandans are terrible risk assessors, and I think it's wrong to think that Kyagulanyi aka Bobi Wine has contributed so mightily to the Uganda opposition than FDC's Kiiza Besigye or DP's Paul Ssemogerere. This belief was mainly coined by those that designed his campaign and it had a grass root effect among voters.

Bobi's handlers designed the campaign around reshaping his public image as bigger than Besigye, and causing outrage among the population than speaking about issues, and it was effective. Everywhere Bobi went, he could sing and dance to his songs (without a mask), and then sing: 'Museveni wants to kill me', Museveni is old and not a leader of our generation'—no serious policy was sold whatsoever.

Peter Sandman, a self-described ''risk communications consultant'' in Princeton, New Jersey, told the New York Times in 2004, 'risks that scare people and the risks that kill people are very different.'' For instance, talking about a bad road in an election campaign doesn't bring out outrage among the people yet the sight of teargas or sound of bullets being fired--- does. Just mere talks about the failures of Museveni don't inspire outrage. This is due in part to the familiarity factor—people had seen previous opposition leaders talk about them, and it wasn't something unusual anymore.

Sandman reduced it to a simple equation: Risk= hazard+ outrage. He conceded that outrage and hazard do not carry the same weight in his risk equation. 'When hazard is high and outrage is low, people underreact,' he said. ''And when hazard is low and outrage is high, they overact.'' So, Bobi's team understood this well and invested in it.

FDC's Patrick Amuriat(POA) was arrested 13 times during the 2021 campaigns while Bobi was arrested only three times, but because there were fewer soldiers and bullets fired during POA's arrests, less outrage was created, and therefore, less support for the FDC candidate. The thought of Bobi being shot through the chest with a gun is gruesome, dramatic, horrifying---- in a word, outrageous.

For instance, I remember watching a video when Bobi was stopped from campaigning in my childhood neighborhood of Kayunga, Bugerere: one of his police guards was, reportedly, shot in the head, and another member of his campaign team shot in the mouth with a rubber bullet. The video was made with an intensified sound at the point of the explosion being set off, such that it almost seemed like a direct assassination of the presidential candidate himself. I remember waking up to several YouTube and Whatsapp messages of 'Bobi survives death today', and I thought, 'hope this isn't true'. To demonstrate the seriousness of the threat to kill him, Bobi later put on a bullet proof jacket the rest of the campaigns.

In the interest of fairness, a lot of insiders have revealed that there was a direct threat to Bobi's life from some foreign elements—they wanted to assassinate him such that they create chaos in the capital city which would, eventually, lead to the fall of the Museveni government. I don't know how true this is but Museveni was expectedly forced to commit a lot of soldiers and military around Bobi 24/7. As might be expected, all this created bedlam wherever Bobi campaigned, and it made Museveni look like an ogre every time he tried to stop him from campaigning. For Bobi and NUP, this was a remarkable boon.

This was hardly how Museveni wanted the campaigns to go. So, around November 2020, a decision was made to arrest Bobi because he wasn't following the COVID-19 guidelines—that allow a candidate to only address a crowd of about 200 people. It all backfired on him as more outrage was created especially in the central—riots happened and over 50 were killed.

When all else fails and reason is to no avail--why not cheat by bribing the referee to stop your opponent from boxing you, altogether. As such, the Electoral Commission later passed a resolution stopping the presidential candidates from campaigning in 11 districts due to the surging Covid-19 infections and persistent violation of Standard Operating Procedures (SOPs) by some political candidates.

At the start of the campaigns, Perhaps Museveni thought the easiest solution was to leave Bobi alone and let him collapse on his own because of his inherent flaws. Perhaps that would stop all the purely partisan based criticism and allow all of us to focus on the real problems. It didn't work. Propaganda magnified the outrage levels among Ugandans—there was a lot of fake news and live recordings being broadcast by Facebook pages attached to Bobi, and the state found it difficult to control them.

For all anyone who watched everything on social media and was psychologically affected, the message being reinforced was that he had faced more violence than Besigye but, in reality, it's not true. Nobody in the history of our country has matched what Besigye has been subjected to under Museveni. Besigye is so brave and isn't held back by fear and intimidation. He was one man who was equal to it, able to take it by the horns, by the rough members of the cross the state hung him on and wrestle it, not to the ground but to glory. Therefore, It is ever so misleading to restrict the idea of greatness or heroism to the merely material, visible and physical representations of it, one's move from Ghetto to politics, or three years of political involvement.

Every election in Uganda is affiliated with something new or shocking. This is often a response to the some growing scare in which, as Sandman might put it, the outrage outweighs the hazard. The scare in this election was rigging of results. So, Bobi responded to that fear with an app that he knew very well would be controlled by the internet—that is controlled by Museveni.

Guess what? The app didn't work, the 'referee' announced Museveni the winner, Bobi was detained in his house for only 9 days after voting, and it looks like we are moving on to 2026,inishallah!

Akuapem Poloo conviction should serve as a deterrent to nude...
49 minutes ago