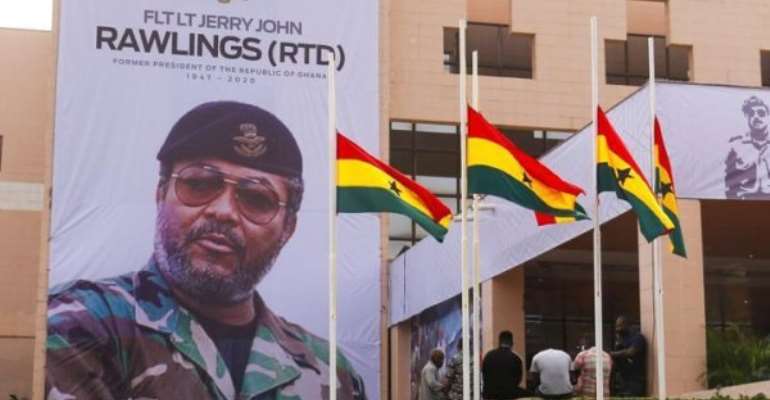 Flight Lieutenant Jerry John Rawlings, a former Airforce Officer, who presided over the Provisional National Defence Council (PNDC) as Chairman and Head of State for 11 years, implemented many life-changing economic policies that defined Ghana's economic structures and aided its socio-economic development. It must be noted that most of those economic reforms were proposed and supervised by the International Monetary Fund (IMF) and the World Bank from 1982 to 1992 under the PNDC regime and during the constitutional rule under the Fourth Republic from 1993 to January 7, 2001.

Following his passing on November 12, 2020, it is imperative to go down the memory lane on some of those economic policies and programmes that laid the foundation for the country's economic growth.

Although some of the Rawlings' critics and economic pundits, over the years, have downplayed the impact of those policies on the overall development of the country, it is impossible to ignore their far-reaching impact on the ordinary Ghanaian.

President Rawlings leveraged on his personal qualities and principles of probity, accountability and service to champion the implementation of those economic reforms. His economic strategy has been the identification of poverty reduction as an overarching objective of ensuring macroeconomic stability, which the IMF fully recognises as crucial for ensuring sustainable economic growth.

It is worthy to note that the plethora of economic policies and reforms rolled out by the Rawlings' governments under both military and constitutional era saw significant progress in poverty reduction.

Ghana unveiled an Economic Recovery Programme (ERP) in 1983 aimed at reversing a protracted period of serious economic decline characterised by lax financial management, high inflation rates, which was over 100 per cent and extensive government involvement in the economy. The overriding objective of the ERP was to reduce Ghana's debt stock and improve upon its trading position in the global economy.The programme was an open market-based one intended to eliminate price ceiling, reduce the influx of foreign imports and stabilise the fiscal deficit.

In 1984, Rawlings' administration introduced the Structural Adjustment Programme (SAP) with the primary aim of reducing government's involvement in the economy and allowing the free interaction of demand and supply actors.

However, during the period, the performance of the banking industry deteriorated with high levels of non-performing assets and investment deposit mobilisation, which made the public banks insolvent.

Therefore, the government launched the first phase of the Financial Sector Adjustment Programme (FINSAP) in 1988 to fully deregulate and liberalise the financial sector and improve resource allocation within the various sectors of the economy.

The IMF and the World Bank note that Ghana's pioneering PAMSCAD cushioned the adverse effects of the free market reforms, hence it was introduced as a safety net for the vulnerable people.

The programme was conceived to help small-scale businesses to identify their local needs such as the rehabilitation of school buildings, health facilities among others, which government received support from the IMF and other donor agencies to help finance them.

In the 1990s, the Rawlings administration set up the National Development Planning Commission (NDPC) to formulate and implement an enhanced economic strategy to consolidate the gains chalked by the economic programmes.

The establishment of the NDPC was a key foundation for accelerating economic growth and poverty reduction.

For instance, the NDPC constituted a Working Group comprising academicians, consultants, non-governmental organizations and researchers from both the public and private sectors in an attempt to make the development efforts as broad-based as possible. It was from these early efforts that the Ghana-Vision 2020 Strategy emerged.

The proponent of the programme felt that the private sector has to play a dominant role in generating substantial increases in savings, investments and exports.

Therefore, the private sector Advisory Group was set up in 1991 charged with the responsibility to make recommendations on how to improve the economic environment.

This long-term programme of economic and social policies developed in a participatory fashion became known as 'Ghana-Vision 2020' and remains the foundation of the country's strategy towards raising the living standards of the people and reducing poverty.

These consensus- building efforts led to the National Economic Forum in September 1997 that rolled out pragmatic policy measures for accelerated economic growth within the framework of Ghana-Vision 2020.

In 1992, the Rawlings' administration for the first time allowed private traders to buy cocoa beans in competition with the state-owned Produce Buying Company (PBC).

For instance, in 1992 the Bank of Ghana (BoG), the country's Central Bank, began using indirect instruments as the primary instruments of monetary policy, replacing a system of credit ceiling on commercial banks with weekly auction of government and central bank securities.

In fact, Ghana's economy was poised to embrace private sector investments for sustainable growth. It must be noted that the economic reforms pursued under Rawlings' administration was participatory approach for decision-making.

Ghana was recognised as one of the first African countries to seek more widespread participatory approach involving civil society organizations in development planning.

Ghana's economic strategy under Rawlings was mainly the identification of poverty reduction as an overarching objective of macroeconomic policy and the IMF fully recognises this as crucial to ensuring sustainable development.

In 1998, Rawlings' government re-introduced the Value Added Tax (VAT) after receiving massive public resistant in 1995 when it was introduced first.The tax reform enabled the government to generate tax revenue for development purposes.

The Rawlings administration also diversified about 200 state-owned enterprises under its Privatisation initiative, executed by the Divestiture Implementation Committee to help government meet its high expenditures.

Rawlings first came to power through a military coup as a 32-year old Air Force flight lieutenant in 1979, and then a second coup on December 31, 1981.

He went on to rule the country for 19 years as a military leader and democratically elected president under the Fourth Republic.

He took the nation through difficult economic crisis by implementing economic recovery programmes after inheriting a seemingly corrupt economic environment, with market women largely blamed for shortchanging their customers by hoarding their goods and later sold them at cutthroat prices, which became popularly known as "Kalabule" in the late 1970s.

Some of the traders were flogged publicly by soldiers to serve as a deterrent to others, while others had their wares seized and looted.

The economic policies and reforms from 1982 to January 7, 2001 such as the ERP in 1983 ensured the country gained a sound foundation to propel her growth in subsequent years.

Prior to the implementation of the economic recovery programmes, he notes that Ghana recorded low economic growth and sometimes negative indicators.

"The year-on-year inflation was hovering around 120 per cent coupled with high prices of basic goods like food stuffs," he recalls.

"Public sector workers were not respected because their salaries could be in arrears for months.

"At that time, Makola traders even gained more respect than public sector workers because they have money."

Thus, the roll out of the ERP helped to revive the economy and reduced endemic poverty.

The SAP, the Financial Sector Adjustment Programme, and PAMSCAD restructured the economy and reduced inflation to double digit.

Prof.Quartey, however, points out some challenges with the diversification of the SOEs.

Some were not properly valued, while others, though were doing well, were still privatised or sold.

The implementation of the Structural Adjustment Programme also led to retrenchment of public sector workers.

This resulted in social hardships, hence the rolling out of the PAMSCAD to mitigate the economic hardships.

Nonetheless, the roll out of the FINSAP helped the recapitalization of collapsing financial institutions at that time and, subsequently, opened up the country for Foreign Direct Investment (FDI).

Prof. Quartey lauds Rawlings administration' for executiving many infrastructure projects across the country, including national landmarks such as the Accra International Conference Centre and National Theatre.

Indeed, the socio-economic impact of the roads to rural areas to help the carting of food stuffs to the market centres and its ripple effects sums up the Rawlings socio-economic factor on the ordinary man.

Modern Ghana Quote Reports
Catch up with all the political quotes from our politicians.
Sponsored
More Article
Modern Ghana Links
Traditional healers in South Africa are exposed to infection, but few can get protective gear
Small things can save lives: coping with COVID-19 in resource-scarce hospitals
Why fines and jail time won't change the behaviour of Ghana's minibus drivers
Why Tunisians are still out on the streets -- a decade after the 'Dignity Revolution'
Simple Biochemistry of Oxford-Astrazeneca C19 Vaccine
Council of Europe fights for your Right to Know, too
The New Land Act: Implications For Property Rights Of Spouses
How does resistance to disinfectants happen? We're on the road to answering the question
Why Eritrean refugees choose the risky migration to Europe
Quote Reports Dossiers
TOP STORIES

I'll not support LGBTQI even if it will cost my Parliamentar...
49 minutes ago