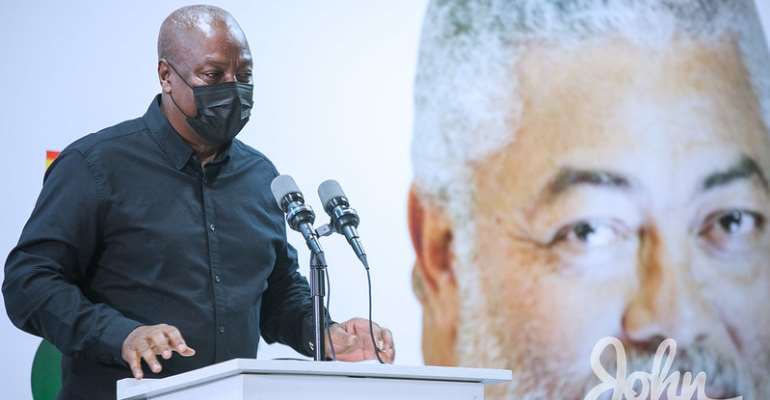 Former President John Dramani Mahama has charged fellow his National Democratic Congress (NDC) members to safeguard the integrity of the party in memory of its late founder Jerry John Rawlings.

Speaking at a symposium in honour of the late former President last night, Mr. Mahama cited the contrasting fortunes of the New Patriotic Party (NPP) and the Convention People’s Party (CPP) under the Fourth Republic.

“The NPP has no founder, but they have survived as a party. Today the CPP has no founder. Nkrumah is dead and gone, but the CPP is splintered into so many different parties.”

“The only way we can do that [to sustain the integrity of the party] is to have a sense of sacrifice. We must have a collective responsibility to keep our party intact and together in order that we protect and preserve the memory of this great man,” Mr. Mahama said.

They credited Rawlings for Ghana's current stable democracy and urged Ghanaians especially supporters of the NDC to fight to protect the gains of Ghana’s democracy.

The body of the first President of Ghana's 4th Republic has been lying-in-state at the Accra International Conference Centre as part of his four-day funeral.

Yesterday, members of the public, heads of security agencies, leaders of political parties along with traditional leaders among others were given the opportunity to pay their respects to Mr. Rawlings.

A day before, a requiem mass was held for the late former President at the Holy Spirit Cathedral in Accra.

Mr. Rawlings' funeral will be held at the Independence Square in Accra from 9:00 am to 11:00 am on Wednesday, January 27.