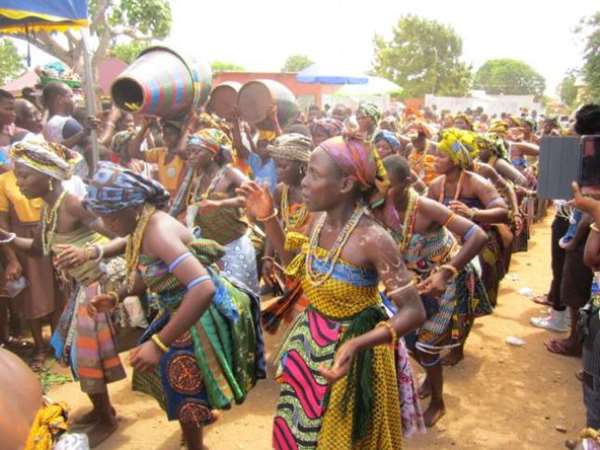 Literally and contextually, Tͻŋu means along or by the river (tͻ = river ; ŋu = along or by). As such, the people of Tongu derived their collective name from the fact that they have settled along both sides of the Volta River. It was in this regard that Amate (2017: 102) described Tongus as “riverside people.” They are therefore called the Tongu Eʋes to differentiate them from the Aŋlͻ Eʋes and the Ʋedome Eʋes of Ghana (Nukunya, 1992). Each of the three Eʋe groups of Ghana speak different and identical dialects, albeit numerous similarities. Sometimes however, each tends to have a different name for the same thing. For example, Anlos refer to mosquito as Mu, Tongus call it Avagɛ while the Ʋedome Eʋes call it Tulin..

Just like the twelve other traditional areas in Tongu, Dorfor has numerous gods or deities, which are referred to in Eʋe as Trͻwo. The people of Tongu also refer to their Trͻwo as Tongu Danyiwo and the Kͻlie Deity of Mafi Traditional Area is believed to be the linguist for all the gods in Tongu.

Dorfor alone has about thirteen (13) gods and perhaps the most popular among them are Koklofu and Tsaduma. Koklofu is a war deity and it belongs to the Amanflu Clan.

In 1870, Dorfor was engaged in a battle, which became known as Dorfor -Kome–Ayimagonu Battle. It was indeed an extension of the Geraldo War with the people of Ada. Geraldo de Llima was a Brazilian slave merchant whose success in trade was misrepresented to the British at the time by one Domprɛ of Akyem Kotoku. The people of Anlo referred to Geraldo as Dzanadu. Initially, Dorfor was preparing for the Ʋedome or Peki Battle in 1869 in support of the Akwamus. However, the British in unison with Ada, Ga, Osudoku, Krobo and Akyem attacked the Akwamu-Ashanti Army from the rear but the British force was intercepted by Dorfor at Ayimagonu, a stream or river near Aboetia and Senchi on Dorfor land. It must be noted that Akwamu and Dorfor are neighbours; they share boundary.

Another narration revealed that it was the people of Dorfor who brought the Dorfor -Kome –Ayimagonu Battle unto themselves. It was alleged that with the help of some Mafi warriors, the people of Dorfor attacked and killed some Ga and Ada traders at Ayiwata and the reprisals from the Adas and Gas with assistance from the British led to the Dorfor -Kome –Ayimagonu Battle.

The British- led opponents chased the Dorfor warriors to the Ayimagonu stream where a baobab tree (adidoti) was standing, and Dorfor was being defeated. Oral history has it that fortunately and mysteriously, the Koklofu deity of Dorfor appeared atop the baobab tree, in the form of a bulletproofed human figure dressed in a war attire. The enemies started shooting at the human figure atop the tree but the figure would not die. The enemies focused on this mysterious figure until Dorfor went behind and defeated them. However, Dorfor-Kome was badly defeated that day. At that time, Dorfor was under the reign of Torgbe Kͻmlaga I as the Fiaga.

Consequently, one of the significant oaths of Dorfor is Meka Ayimagonu, meaning I remember the battle of Ayimagonu or I invoke the saving deity of Kokolofu as it appeared in human form on the day of Ayimagonu Battle.

In memory of their victory in the Ayimagonu Battle and in recognition of the fact that the Koklofu Deity saved them, Dorfor introduced a festival and named it Ayimagonu Festival, which they celebrate annually in November. It was through this mysterious means that the Dorfor Festival got its name.

After the Glover War (1873-1876), the British seized autonomy from Dorfor and placed the area under one Native Administration with the people of Akwamu, Volo, Fodzoku and Torgorme. As if that was not punishment enough, the British recognized the Omanhene of Akwamu as the Paramount Chief over the others regardless of the differences in linguistic affinity, cultural practices and many others that existed between the Akans and Eʋes. The other Tongu States were also re-aligned to Ada and Anlo States. The Tongu States opposed the re-alignment for years until in 1945, the Tongu Confederacy Council was formed to end the re-alignment.

The people of Ada corroborate the fact that some Tongu States once held allegiance to the Ada Matse. For example, on page 5 of their 75th (2012) Asafotufiami Festival Brochure, Adas wrote that Tongu States such as Agave, Sokpoe, Tefle, Mepe, Bakpa and Battor were once part of the Ada State. However, Amate (2017: 103) added Vume and Mafi to the list. Amate’s account may be true if not more accurate, because at page 2 of the 2007 Asafotufiami Festival brochure, Adas included Mafi in the list but omitted Vume. Until the secession of the Tongu States from the Ada State in 1945, Adas did not have Divisional Chiefs or Wetsoyi. Divisions Chiefs were created only after the people of Tongu ceased to hold allegiance to Ada Matse.

One may conclude logically from the narratives that the Koklofu Deity of Dorfor is the Ayimagonu Festival of the people and the Festival is the Deity. The people celebrate the Festival in memory of their god (Koklofu) who saved them in a battle field at Ayimagonu in 1870. I hope you have enjoyed the story. I urge readers who have other versions of the story to make submissions on the comment section of the news portal to enable us build knowledge together.

Manual on COVID-19 vaccination being developed for public se...
51 minutes ago