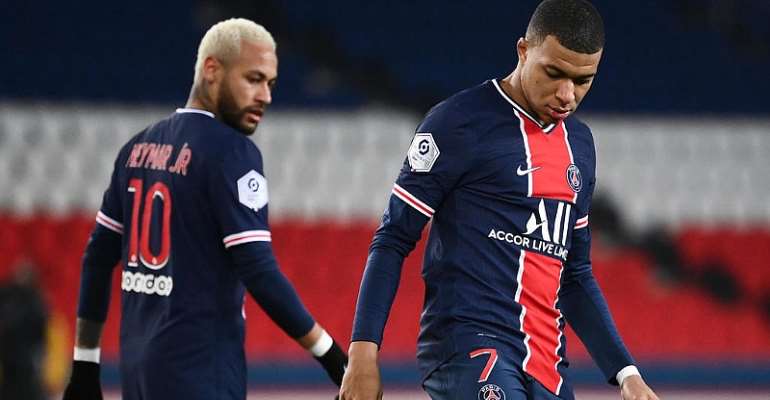 Paris Saint-Germain moved three points clear of Lille at the top of Ligue 1 on Friday night after a a 4-0 annihilation of Montpellier at the Parc des Princes.

It was a solid and then a suddenly spectacular performance in front of new boss Mauricio Pochettino who returned to the bench after a week in isolation with the coronavirus.

His side's task was made easier 16 minutes into the encounter. Kylian Mbappé, racing onto a through ball, was upended by Montpellier goalkeeper Jonas Omlin.

Referee Willy Delajod initially brandished a yellow card but after checking with the video assistant referee changed it to a red.

After a couple of squandered chances, PSG finally made the breakthrough. Neymar surged forward from midfield, pushed the ball onto Angel Di Maria who slid it on to Mbappe.

The France international, without a goal in 2021, impudently chipped the ball over substitute keeper Dimitry Bertaud.

Goal rush
Neymar swept in the second on the hour mark and Mauro Icardi smashed home the third a minute later.

After neat interchanges between Neymar and Icardi, Mbappé was left with a simple tap-in to rack up the fourth after 63 minutes.

Lille can join PSG on 43 points if they beat Rennes on Sunday afternoon.

Suspend Sammy Gyamfi if he fails to apologize to Speaker, Ha...
50 minutes ago

Shame on you for abandoning post for 3 hours to go drink tea...
54 minutes ago