By Keith Gottschalk - The Conversation 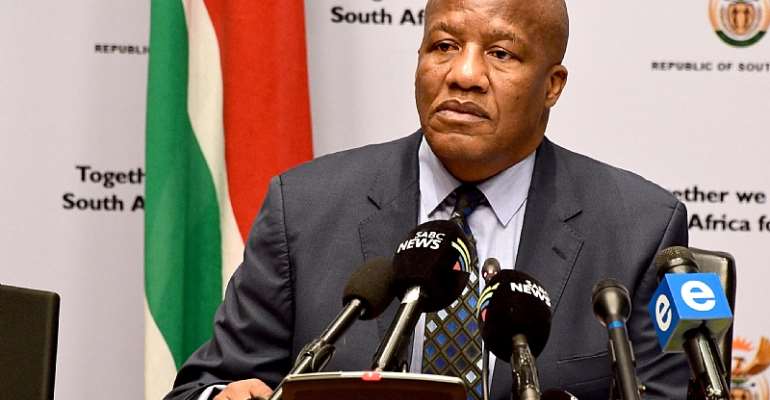 Jackson Mthembu is the most prominent South African politician to succumb to COVID-19. - Source: GCIS

The death of Jackson Mphikwa Mthembu , Minister in the Office of the President of South Africa, has been met with sorrow across the country. Tributes have come from across the political spectrum for the country's first government minister to succumb to COVID-19. He was 62.

Mthembu's integrity, dedication to his job and sense of humour explain the response to his death.

Minister Mthembu was an exemplary leader, an activist and life-long champion of freedom and democracy. He was a much-loved and greatly respected colleague and comrade, whose passing leaves our nation at a loss. I extend my deepest sympathies to the Minister's family, to his colleagues, comrades and many friends.

The leader of the official opposition, the Democratic Alliance, John Steenhuisen, said to Mthembu's family, friends and the governing partty, the African National Congress:

You have lost a generous man with a big heart and an even greater sense of humour.

Corne Mulder, leader of the right-wing Freedom Front Plus , said “Jackson Mthembu was an excellent chief whip of Parliament. He stood strong on principle when Parliament came under attack during the Zuma years.”

He was referring to the tenure of former President Jacob Zuma , from May 2009 to February 2018, characterised by populism and rampant corruption in government .

Jessie Duarte, the deputy secretary-general of the African National Congress, enthused about how Mthembu had been a dedicated, committed activist with “an unbelievable work ethic” who was meticulous about his work and believed that the democratic project could work.

She said Mthembu had a great sense of humour and an “amazing” ability to interact with people:

We have lost a person who put the country first, at all times. For us who have lost a brother and a friend, this is a very great loss. He leaves a legacy of honesty and integrity.

His death drives home the seriousness of the COVID-19 pandemic in the country .

Mthembu's life mirrored the daily toils black South Africans had to endure under colonialism and apartheid. His life was also synonymous with the struggle for freedom by the young activists who picked up the baton from leaders like Nelson Mandela and Robert Sobukwe , among others, who were either jailed or banned or, like Steve Biko , paid the ultimate price at the hands of the apartheid regime.

Mthembu was born in the eastern Transvaal, today's Mpumalanga province, in the east of the country. He was raised by his grandmother and uncles. From the age of seven, he had to help his grandmother working in the family's maize fields. He was kicked out of school several times because his family could not afford school fees, uniforms or school books.

He was a student leader during the 1976 school revolt , sparked by the imposition of the Afrikaans language as a medium of instruction. The revolt spread throughout the country. The harsh response of the apartheid regime, shooting and killing unarmed children, led to revulsion around the world, further isolating the apartheid government.

He was expelled from Fort Hare University in 1980 owing to his political activities. In 1980 he got a job at Highveld Steel and Vanadium, and became one of the first Africans to be promoted to production foreman. Between 1984 and 1986 he became a senior steward of the Metal and Allied Workers' Union, which is today called the National Union of Metalworkers of South Africa .

The Special Branch (the apartheid political police) repeatedly detained him for months of solitary confinement during the 1980s states of emergency , tortured him in police stations, and petrol-bombed his home. Mthembu was prosecuted for sabotage, treason and terrorism with 30 other activists in the Bethal terrorism trial of 1986-1988 . He was acquitted.

After this acquittal, the apartheid security police continued with their harassment and intimidation. This led him to move away from Witbank, to the east of Johannesburg, and find refuge in Soweto and Alexandra in the Gauteng province as an “internal exile”, seriously disrupting his family life .

He was elected deputy regional secretary for the Pretoria-Witwatersrand- Vereeniging region (today's Gauteng) of the United Democratic Front , the above-ground home for supporters of the then-banned African National Congress during the 1980s.

Mthembu worked with the South African Council of Churches, and in 1988 led a convoy of 300 minibuses as the SWAPO Support Group to help them during Namibia's first democratic elections. SWAPO (South West African People's Organisation) went on to win the elections, and has governed Namibia since independence from South Africa in 1990 .

In 1994 Jackson Mthembu was elected to Parliament and participated in the drafting of the South African constitution. Between 1997 and 1999 he was a member of the Mpumalanga Provincial Legislature, and served as Member of the Executive Committee for Transport.

He was elected to the national executive committee in 2007, and worked at the ANC head office, Luthuli House in Johannesburg, where he and then secretary-general Gwede Mantashe defended Zuma over the scandal involving the use of public money for expensive renovations to his private home at Nkandla . In 2014 he became an MP in the National Assembly, chairing the portfolio committee on environment, becoming ANC Chief Whip in 2016.

As the tide within the ANC was beginning to turn against Zuma, he worked with the Democratic Alliance to schedule a parliamentary debate on “state capture” – large-scale corruption – during Zuma's presidency.

Mthembu took part in the CR17 campaign to get Cyril Ramaphosa elected as the successor to Jacob Zuma as president of the ANC. In 2019 Ramaphosa appointed him Minister in the Presidency.

Mthembu, someimes affectionately referred to by his clan name, Mvelase, is survived by his wife Thembi Mthembu and five children. His first wife, Pinkie, and one of his daughters predeceased him. His death was greeted with ringing tributes across the floor in parliament.

Keith Gottschalk is a member of the ANC, but writes this in his professional capacity as a political scientist and historian.

By Keith Gottschalk, Political Scientist, University of the Western Cape