So much blood: France and Algeria's unresolved history 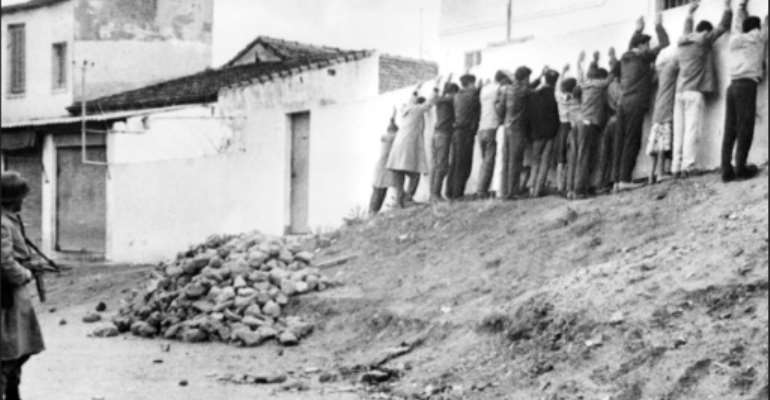 French troops line Algerians up against a wall in Algiers in December, 1960. By STF (AFP/File)

Algeria's bloody struggle for independence after 132 years of French rule left half a million people dead -- say the French -- or 1.5 million according to the Algerians.

Both sides agree the vast majority of blood spilt was Algerian.

Soul searching over the torture and killings carried out by French troops -- as well as the tens of thousands of Algerians who fought for the French but were abandoned to their fate -- is still going on 60 years later.

Bitter at being forced into exile, the "pieds noirs" (literally "black feet"), as the Algerian-born colonists are called, became the bedrock of the French far right.

Algeria was also their homeland.

In 1830 France invades Algeria, using a diplomatic incident as a pretext. It was then part of the vast though tottering Ottoman Empire which extended from the Balkans across the Middle East and North Africa.

The country officially becomes a part of France in 1848, a year after the surrender of Emir Abdelkader, the hero of Algeria's long resistance. 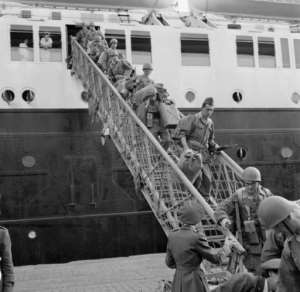 Long war: French soldiers of the 20th Infantry Division land in Algiers in 1956. By COUILLARD (AFP/File)

Large numbers of European settlers pour in from France, Spain, Italy and Malta.

An 1870 decree divides the native population by granting French citizenship to Algeria's Jews while Muslims were excluded. They will remain second class citizens until 1958.

Hundreds of thousands of Algerians fight and die for France in both world wars. But rising Arab nationalism, and France's dismissal of native demands, lead to bloody riots in eastern Algeria on the day World War II ends in Europe in 1945.

The May 5 violence ends with French forces massacring between 6,000 and 30,000 people in the town of Setif and the neighbouring Constantine region.

On the night of November 1, known as "Toussaint Rouge" (Red All Saints Day), explosions rock government buildings across the country, leaving 10 dead.

Blood really begins to flow after an FLN attack on the city of Skikda (then Philippeville) and on mining villages near Constantine on August 20, 1955. 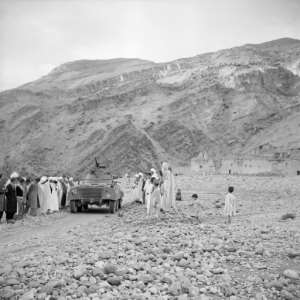 A French armoured vehicle patrols the Aures region in November 1954 in the aftermath of the "Toussaint Rouge" attacks which marked the start of the war. By - (AFP/File)

While fighters butcher European women and children, the vengeance wreaked on the Muslim population by the French is even worse.

The carnage continues with FLN bomb attacks shifting to the capital Algiers in late 1956, with French paratroopers using torture and summary executions to hit back brutally in what came known as the "Battle of Algiers".

Support for the war is waning at home, and many of France's allies were also turning against her. 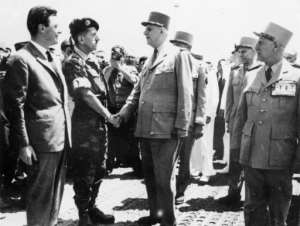 De Gaulle ends the hardline policy of keeping Algeria French and in a referendum on January 8, 1961 three-quarters of mainland voters agree to grant Algeria self-determination.

By this stage, the fighting has spilled over into France.

The far-right nationalist Organisation Armee Secrete (OAS) vows to keep Algeria French and begins a series of bombings and assassinations on both sides of the Mediterranean.

On the night of April 21-22, elements of the French military revolt, but their coup fails.

That October in Paris up to 200 pro-Algerian independence demonstrators drown after being thrown into the Seine River by the police.

De Gaulle began talks with the FLN and a peace agreement is finally signed on March 18, 1962. 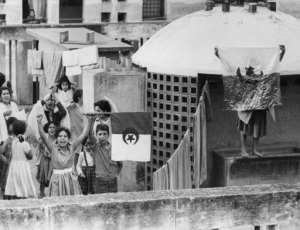 Young Algerians celebrate the anniversary of the beginning of the war of independence on an Algiers rooftop on November 1, 1961. By JEAN-CLAUDE COMBRISSON, STF (AFP/File)

A ceasefire is meant to end the eight years of fighting, but violence continues, even intensifying in some places.

The French vote nine to one in favour of the deal in an April 9 referendum with 99.7 percent of Algerians approving it on July 1.

Around one million "pieds-noirs" flee to France where they live alongside Algerian immigrants they blame for their misfortune.

Some 55,000 Algerians who fought on the French side, known as "Harkis", are massacred by the FLN. Another 60,000 end up in miserable camps in France.

The FLN's Ahmed Ben Bella becomes Algeria's first president, but is ousted in a military coup in 1965.

France has long agonised over its colonial past.

It is only in 2012 that Socialist president Francois Hollande breaks the historical logjam, acknowledging the "unjust and brutal... suffering inflicted on the Algerian people." 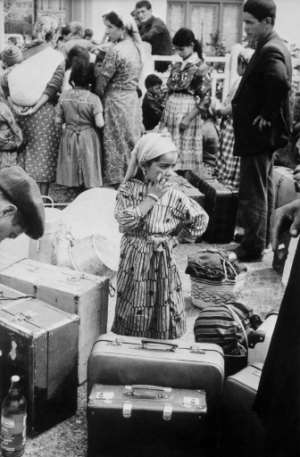 Exile: A young Algerian Harki girl arrives at the Rivesaltes camp in France in September 1962. By STF (AFP/File)

He and Paris mayor Bertrand Delanoe unveil a memorial to the 200 Algerians drowned by the police in October 1961.

Current President Emmanuel Macron -- the first born after the conflict -- goes even further in recognising the scale of abuses by French troops.

He declares Algeria's colonisation a "crime against humanity".