Antwi-Danso urges Akufo-Addo to prone down his fat gov't 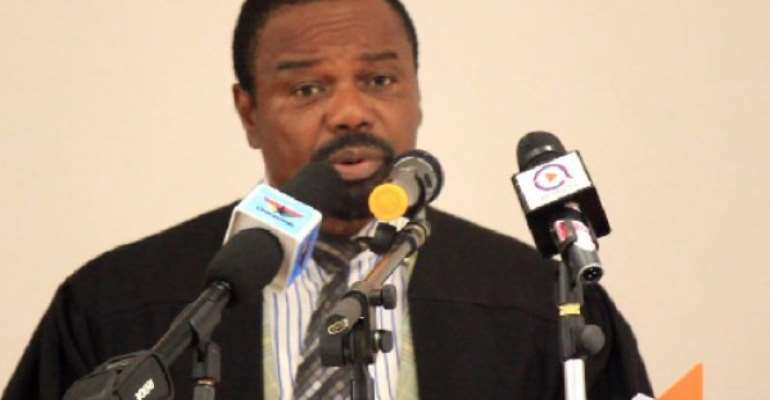 Dr Vladimir Antwi-Danso, the Dean of the Ghana Armed Forces Command and Staff College (GAFCSC), has urged President Akufo-Addo to consider having a lean size government in his second term.

He said having a lean government would cut down expenditure cost and force efficiency through hard work.

Dr Antwi-Danso made the appeal in an interview with the Ghana News Agency in Accra.

The Dean said the 1992 Constitution stipulates that: "There shall be a Cabinet which shall consist of the President, the Vice-President and not less than 10 and not more than 19 Ministers of State".

He explained that the Constitution requires there should not be more than 19 cabinet ministers, however beyond that the President could appoint additional ministers (who are not cabinet members) depending on his agenda.

He said the previous Akufo-Addo Administration had about 110 ministers just because of the type of agenda they put in place to execute; saying they needed all those ministers in order to fulfill that agenda.

However, upon the creation of the new 16 regions, additional regional ministers and their deputies were also appointed by the President in 2019.

He said Ghanaians would always be torn between a lean government as an ideal and the necessity of having a large cabinet and a large number of ministers for fulfilling an agenda.

"I will always go for a leaner government, knowing very well the profligacy that we have in our system in our part of the world," he said.

"In Africa, there is so much profligate spending, and the more you open up ministries, the more you are forced to go on a spending spree."

Dr Antwi-Danso said he anticipated that the next cabinet of President Akufo-Addo was not going to be as large as the previous one; because it looked as if the Government's agenda for the first term to a large extent had been fulfilled.

He noted that ministries such as Railways could be merged with other ministries now to have one ministry for many of them.

"Depending on the agenda of the Government, I expect the next ministries to be smaller than we had in the previous government," he said.

He said the only thing which was debilitating that by the same Constitution was that the President must appoint majority of his ministers from the Parliament; adding that "and that is debilitating enough, he is a Parliamentarian, he is a minister and all kindness of things".

"And so, maybe at times we have to spread it and that makes the ministries a little bit larger. But by and large we are learning from our experiences."

He recalled that then Presidential Candidate John Agyekum Kufuor castigated his predecessor government of having larger government of about 80 ministers, however, when he came into office, he saw that he needed more, then he apologise to the nation.

"Then on and on, we have a government which came in with 110 ministers all in the good name of proper governance," he said.

Dr Antwi-Danso noted that depending on the agenda of President Akufo-Addo in his second term, Ghanaians would soon see the number of ministers he would be appointing; declaring that "but I am not expecting a very large ministries this time".

The Dean maintained that a leaner government was ideal but where there was a pinpointed kind of necessity to create ministries for the execution of a certain agenda, then Ghanaians would have to allow the government to do that.