Can Our Society Survive Without The Role Of The Institution Of Chieftaincy? 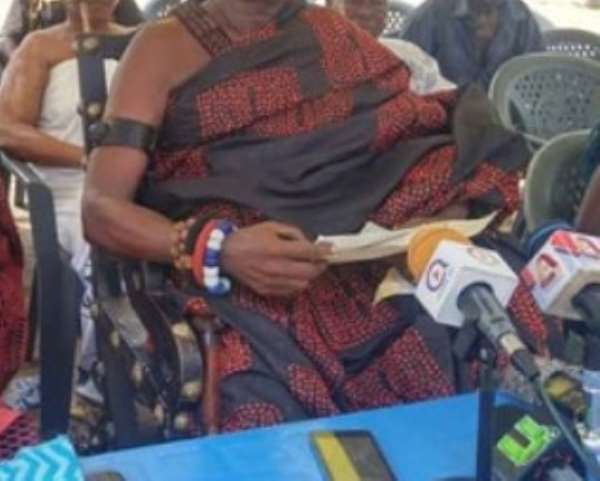 Quick , with no disrespect, ask ten chiefs in your district to give you the rough estimate of the population of their respective towns and villages. Ok, that is a tough one. Let me try this easy one--what about the source of their towns' revenue and do they have a yearly budget?

Undoubtedly, the collateral damages of litigations, family-feuds and other disputes are having negative effects on the aspirations of our chieftaincy institution . So only the governmental intervention and formal academic training for some of the chiefs can fix things.

Can our aging chieftaincy institution salvage its reputation, responsibilities and relevance without being a casualty of time and modernization? It is hard to tell.

To some people the introduction of modern -day technology and life enhancing social amenities are making the institution of chieftaincy very irrelevant in our society. They think the aging institution is just losing its focus and role. But the question is: can our modern-day society survive without the inputs of social intuitions like, chieftaincy ,and what is its new role in our new socio-economic equation?

The positive meaningful role the institution of chieftaincy has played in our society is countless. It provided the society with public safety, judicial, and other important societal functions, when we needed it the most. But what went wrong? It has been politicized, 'talibanized' and marginalized in part by itself for lack of focus and business oriented prowess.

These days, not only the role of chieftaincy has been reduced, it has become a pain -in-the-butt for the central government. Yet the government doesn't know how to fix the deficiencies and it can't get rid of it. Therefore, both have a very unusual relationship with each other. Each partner conveniently exploits the weakness in the relationship to suit its own needs and interest at the expense of the citizenry .

During the election seasons ,the politicians embark on pilgrimages to every chief's palace in the country to seek votes and blessings, while the chiefs also seek financial supports and protect from prosecution and accusations within the clans. Unfortunately, we the citizens are caught between these two competing forces.

The darkness side of the chieftaincy's feuds, disputes ,litigations and societal tensions are holding the progress of our towns and villages across the land in their clutches .But, we only talk about them behind closed doors--like leprosy disease.

We're afraid to discuss these deficiencies in public and our politicians and policy -makers won't say anything openly for the fear of losing votes or offending their constituencies .

Our late president, Dr. Kwame Nkrumah hated it but he couldn't abolish it nor could he drastically and significantly modify it. So no Ghanaian, whether he is a civilian or military can abolish or make any significant changes of the institution of chieftaincy .So they have let it decay at its own peril.

Even communities and their traditional leaders can't decide to make the necessary needed modernization changes of the institution so as to get the socio-economic mileage out of it.

Nevertheless, for better or worst, our chieftaincy institution is here to stay. So we have to find ways and means to make it accountable, respectable , responsible, viable and manageable .

Chieftaincy institution needs modernization and adjustments in order to be in tempo with time and the new socio-economic world order. And, it's constantly looking up to the government to set the tone by setting up a formal training program to train and equip some of our chiefs with the needed business and administration skills.

1.As a matter of urgency the government, through parliament, should task the National House of Chiefs (NHC)to demand a chief succession plan from every town.

2.A written constitution should be retooled to finance and resource the institution and its heads with their pension well- funded.

3.Our chieftaincy institution needs a formal self-empowerment yearly training in Public administration, Public safety, entrepreneurship, business and human resources skills in order for the chiefs to manage our towns and villages effectively and smoothly like real executive heads.

Unfortunately, government after government has created a system which pits chieftaincy against communities and clans against chiefs, so it's not going to repair the damage. But, ultimately, it's what the chieftaincy institution does within our communities, villages and towns that would determine how fast it can redeem and atone itself and reclaim its role on the national development arena.

Above all, it should be sensitive to the needs and aspirations of the people it is institutionalized to serve--not the government, not the politicians and obviously, not those covetous people ,who tone its morning melody .

Stay tuned and have a happy new year.

from Kwaku Adu-Gyamfi(voice of reason)

*The author is a social commentator and a diehard concerned citizen(not a spectator) of our great land.