Everything About This Year's Election Isn't Only Different, But Strange As Well. 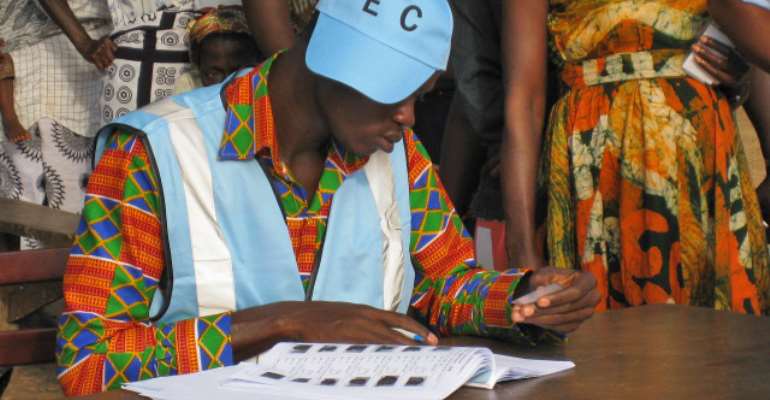 Well, I started voting when my village didn't have lights and where I lived never had lights too. However, thanks to those wealthy families around, who could buy radio sets and those black and white television sets, which they used car batteries to power to allow us to listen to the news on the radio and watch the news on the television about national events like elections, football, Independent Days' activities etc. and also got educated and informed about national issues.

Let me also say there is something I miss a lot about those days and that's; the impeccability with which they spoke the English language during the presentation of news both on the radio and television. It's indeed marvellous. It wasn't like today whereby sometimes we hear some people speak and you pause to ask yourself if they're speaking the English language we all understand or a different language altogether. Nostalgic feelings sometimes can be piteously uncomfortable as well as joyously interesting in one's lifetime.

That's just by the way, as my former French master, may his soul rest in peace, would say. Never intending to create any unnecessary uncertainty with my derailed narration. Let me come back to it now. We had the benefit of listening to the results of the various constituencies as they trickled in. There was a systematic update on every completed and properly certified result that went to the EC's office. It made it possible for political parties, stakeholders, individuals, and other interested groups to be informed about what was going on across the length and breadth of the country. This simple act of disseminating the information to the general public didn't merely keep them informed but it also defused the thick tension that could always be drooping in the atmosphere.

The trend hasn't changed but got improved as many elections got conducted in the country. And one would have therefore thought that, with the inception of technological advancement; which saw numerous radio and television stations springing up in every corner of the country, discrimination of information would have also been improved impressively. However, the opposite is what we saw in this year's elections to the surprise of many, who have queenly been following our elections since 1992. What's suddenly changed the norm is a big question to every single person who witnessed this year's elections with the silence in which it was conducted as compared to the previous ones where the various radio and TV stations were always doing their projections and analysis from start to end.

You would agree with me that most of these stations were either reluctant to give updates or we're simply following exactly what the EC was doing. If many Tv and radio stations and that of other independent observers claimed their figures were the same as what the EC was giving and now the EC has changed their figures severally, what has happened to their figures too? The irony of the situation is that such people aren't talking again. Should we, therefore, suspect some calculated attempt?

Many are therefore befuddled and inquiring to know what could be the problem with this year's event, whereby the usual periodic updates to inform the general public about the elections' activities were missing and all of a sudden, an unimpressive press conference was organised to declare the final results that have instability of figures. Maybe it could be another modern way of doing things by the EC. If it's not, then there is something wrong somewhere. No wonder the euphoria that usually characterises the declaration of elections' results was missing in the public since the EC pronouncement was made.

Indeed, the colourful display of microphones surrounding the EC chair during the declaration of final results isn't what makes the results authentic and acceptable by others, but it shows how more translucent, credible, and opened the commission's business is handled. The involvement of the media in the activities of national events like elections is paramount as their role can't be downplayed. Aside from sending the information to many in different languages and making them get a clear understanding of what's happening, they also put checks and balances on whoever is doing what, when, and how. Once one knows the media can pick and send out any information, one will be very careful about what one does in these processes.

I can assure you many of these silly arithmetic blunders the EC is committing would have been avoided if proper work was done and the EC knew eyes were on it to do a better job. I see super incompetence on the side of a so-called competent EC who came to replace an incompetent one. It can't be denied that the EC mess up hugely, hence the brouhaha surrounding the acceptability of the results by others. If we condemn and admonish those who are refusing to accept the results, let's be fair and tell the EC how it contributed to this mess as well.

However, it's equally unfortunate others would also want to capitalise on the arithmetic weakness of the EC to hold the entire country to ransom with mounted tension everywhere. That isn't acceptable as well, since whoever is not in agreement with the poor performance of the EC knows where to go and what to do. If we have done it before, we can always do it without any unnecessary mounting tension in the country. The law court is there waiting to hear their case.

The EC also ought to have apologised to Ghanaians for this monumental negligence perpetrated by it with the rampant changes in the figures. They should know the sensitive nature of their work and how any act of commission or omissions can plunge the entire nation into a political turmoil. Conflict doesn't know who is prominent in society or who isn't. It's, therefore, our collective responsibility to act credibly and sensitively towards guaranteeing a proper process devoid of any intended political fraud. If there is any word like legacy, the EC chair needs it for the sake of historical records in this country

I'm particularly worried about the way civil society organizations, stakeholders, religious leaders etc. are not seeing the problem with the EC but lampooning and lambasting the NDC as if they got the figures changed for the EC. Once we continue to caution the NDC to take the necessary steps to get this issue amicably resolved, we must be bold enough to point to the EC that it erred seriously in rushing to declare results that were poorly handled by its officials. The EC could keep updating the general public while properly putting the figures together to make a perfect declaration rather than this mess and humiliation it's caused itself.

The pedigree of the EC has been subjected to international ridicule and it's highly unacceptable. The EC must therefore stop the damage control and take the right steps to redeem its image. While the NDC or any other aggrieved parties go to court to seek justice as the right thing to be done. I have spoken my mind.