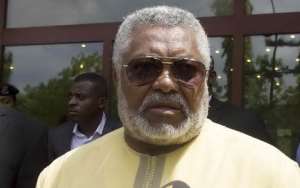 A staffer of the late former President Jerry Rawlings who was arrested by security operatives on Thursday, November 19 has been released.

The staffer, identified only as Barbara is part of a team of staffers being sought over issues relating to the death of the former President.

Her Dansoman residence was raided by over 20 security operatives on Thursday morning.

The CCTV unit in the house had been disconnected when Citi News visited the scene.

The wardrobe and other belongings in the house had also been overturned during the search.

Citi News' information suggests that the operatives were in search of information in the possession of the late former President's staffers including manuscripts of his yet to be published memoirs.

Whereas some people alleged that Rawlings died from COVID-19 complications, his former spokesperson, Kofi Adams rejected the claims.

More from Headlines
ModernGhana Links
Ofori-Atta has been creative; needs to be supported – Gabby
Nana Akomea, thanks for your political honesty, our situation is actually a monumental embarrassment — Prof. Gyampo
Blame minority for Akufo-Addo's resort to IMF bailout; they frustrated e-levy for 6 months and gloating over it – Gabby
TOP STORIES