Akufo-Addo Should Not Regret Amidu’s Appointment 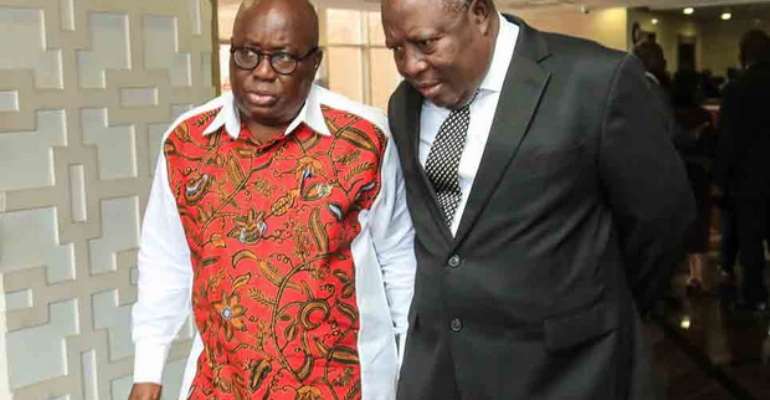 Following the sudden resignation of Mr. Martin ABK Amidu as the Independent Special Prosecutor and his very public expression of fear that his life was in danger, President Addo Dankwa Akufo-Addo was reported to have instructed the Inspector-General of Police (IGP), Mr. James Oppong Boanuh, to provide 24-hour police protection to the former Attorney-General and Minister of Justice (See “Akufo-Addo Orders IGP to Provide Police Guard for Martin Amidu” CitiNewsRoom.com / Modernghana.com 11/19/20). This is perfectly in order and in keeping with protocol and laudable demonstration of the fact that Nana Akufo-Addo has absolutely nothing to hide.

This is also why the President has directed Mr. Boanuh to ensure that the Criminal Investigations Division of the Ghana Police Service (GPS) promptly follows up on any leads that Mr. Amidu may have on the alleged threats to his life. The recently resigned Independent Special Prosecutor claims that the death threats made on his life came in the wake of his “very independent” decision to conduct a corruption-risk assessment and anti-corruption assessment on the controversial Agyapa Mineral Investment Deal. The alleged target of death threats has also reportedly threatened to reveal more damning details about the multibillion-dollar deal, which he claims could very well make the principals involved liable for criminal investigation and prosecution, if his back is pushed against the wall by the Akufo-Addo-led government of the New Patriotic Party (NPP)).

I kindly advise Mr. Amidu not to wait any further to provide the full details of why he so firmly stands by his contention and assertion. The Ghanaian citizenry is owed absolutely nothing but the unvarnished and unalloyed truth. The perennial and deleterious culture of rank corruption in official circles needs to be radically extirpated once and for all; it does not matter whose proverbial horse is gored. Indeed, many of us avid students and studious spectators of Ghanaian politics saw the extreme difficulty with which the corruption fight was confronted by the then newly installed Akufo-Addo government, when the latter flatly refused to rigorously prosecute the former Mahama cabinet appointees and executive operatives who were caught in the fetid mesh of double-salary scamming of the Ghanaian taxpayer. From then on, it was peevishly and scandalously clear that the much-touted anti-corruption agenda of President Akufo-Addo was dangerously off to a very bad start.

Matters were not the least bit meliorated or justice served, when extortion-tainted National Democratic Congress’ leaders like Mr. Haruna Iddrisu, the infamous University of Ghana plagiarist and the Parliamentary Minority Leader, was widely reported to have crisscrossed the country to desperately solicit the patently unhealthy intervention of some prominent and distinguished and highly influential leaders – both traditional and nontraditional – to facilitate the lurid abortion of the effective operation of the country’s legal and criminal justice system. So, of course, there was an ominously false start, right from the get-go, that presaged or portended worse things to come down the pike, as it were. This was not the very first time that the much-touted anti-corruption fight by leaders of the country’s two major political parties had been scandalously aborted. There was, for example, the Grand-Theft of the Alfred Agbesi Woyome’s GHȻ 51.2 Million extortion of the Ghanaian taxpayers’ money, which both the extant President John Evans Atta-Mills and Vice-President John Dramani Mahama had jointly and publicly backed, at a press conference, as one that was perfectly legitimate and constitutionally indemnifiable.

Paradoxically and opportunistically, in the leadup to the 2012 Presidential Election, Candidate John Dramani Mahama would con Ghanaian voters into believing that he was the one candidate who unquestionably was best positioned to retrieve the Woyome Loot which, it would shortly turn out, had actually been divvied up by the impenitently kleptocratic front-row leadership of the National Democratic Congress. By the way, I am perfectly in agreement with those disillusioned political bird watchers and avid students of Ghanaian politics who are fully convinced that when it comes to the old seemingly intractable culture of bribery and corruption, both the ruling New Patriotic Party and the main opposition National Democratic Congress may very well be a Siamese Twin.

Fortunately, there may be at least one salient distinction between the so-called Danquah-Busia-Dombo Traditionalists and the veritable Cash-and-Carry Darwinian Sinkhole – and, to be certain, Shithole – that is the Chairman Jerry John Rawlings-founded faux-socialist juggernaut of the National Democratic Congress. And it is the fact that Equal Opportunity Corruption between the NPP and the NDC notwithstanding, it is the NPP, and not the NDC, that still maintains an enviable track-record of implementing all-inclusive social intervention programs, such as the Akufo-Addo-implemented Fee-Free Senior High School System, the opportune and salutary resuscitation of the John Agyekum-Kufuor-established and the John Dramani Mahama-botched National Health Insurance Scheme (NHIS). You see, Realpolitik is about Maximum Sharing of the Collective National Goodies or Wealth, and not the barbaric sort of the Cash-and-Carry political philosophy that is the overriding development agenda of the Mahama Looting Brigade.