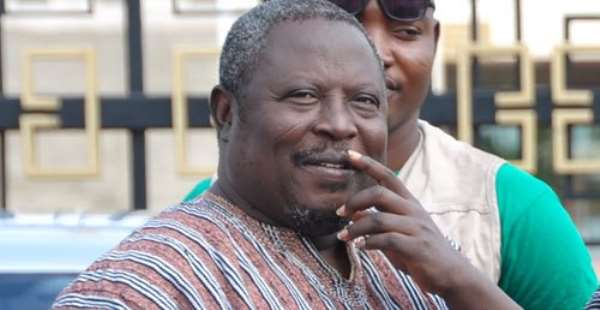 No matter how long it takes, the truth will out. One cannot hide their true nature, or colour of character, forever. No matter how far you endeavour to hide your darker side of character, you will be exposed with the passage of time. Time is a healer. And, time will tell.

I was among the many Ghanaians that hailed Hon. Martin Amidu, when he stood up, and single-handedly, took on Alfred Agbesi Woyome, when he, Alfred, swindled Ghana out of GHC51.2 million. Although, I was one of the first Ghanaians to take Alfred to the cleaners in attempt to get him cough up that huge sum of money he had collusively duped Ghana of, I recoiled into my lair while Martin Amidu relentlessly pursued him in court until a favourable verdict was obtained for Ghana. Alfred Agbesi Woyome was ordered by the Supreme Court to refund the money since he had obtained it dubiously. He had not signed any contract with Ghana government hence had no right to collect that money.

Almost all Ghanaians came to acknowledge his selfless dedication to serving his country and people with enthusiasm. His dynamism, preparedness and boldness to fight to free Ghana from the tentacles of official corruption was unique and admirable. This was the reason why many a Ghanaian went into jubilation when he was appointed by His Excellency the President, Nana Addo Dankwa Akufo-Addo, to become the Special Prosecutor to ensure that official corruption, the bane of the economic emancipation and development of Ghana, was robustly fought and defeated.

However, less did discerning Ghanaians know that Hon. Martin Amidu was harbouring a totally different intention or agenda. He was using the superficiality of resolute determination to fight official corruption as the springboard to achieve his hidden diabolic intent. No wonder that for almost three years that he had been in the post as the Special Prosecutor, he was unable to prosecute even a HOUSEFLY, let alone, successfully prosecuting any of the perceived corrupt officials Ghana abounds in.

The dark sinister side of Hon. Martin Amidu has surfaced after whiling away time as the Special Prosecutor, and upon his resignation. The timing of his resignation is suspect. His accusatory reasons assigned for his resignation heightened the temperature in the country hence concerned self-styled criminal investigators started digging into files. In less than no time, following from his tempestuous resignation, ouch, he was exposed as a fraudster, the greatest liar and malicious individual ever to be trusted, amid unknowingly, by a president determined to rid his country of devastating official corruption.

Hon. Martin Amidu has been exposed for deliberately sleeping on his duty by his incessant refusal to occupy buildings sought for his office. He, himself, would go and find a building suitable for his office. Once work was in progress, he would ask the government to discontinue with it since he has found a more suitable one. From the information available in the public domain, attested to by official correspondences, he refused all such buildings.

After intentionally diabolically refusing all the buildings that came at a great cost of financial loss to the state, he absurdly resigns, citing interference in his job by the President of Ghana. Who does he think he is trying to fool if not himself?

How many times had the president attempted to interfere in the execution of his job, although independent from any institutional interference as his office is? He only cited that of Agyapa Royalties deal. Before the Agyapa Royalties deal, had Martin Amidu been investigating other people and institutions and if yes, had the president tried to influence him? If the president had been interfering in his other investigations, did he come public with it? If no, why not?

After finding himself cornered by the most stupid reason cited for the refusal of the ten-storey building completed for his office, he had only to run out to announce to the public his resignation? He could see that with the building completed and per his own specifications, he could no longer come up with any better excuse not to do his job. He had no more space to spin further tales to delay doing the job for which he had been appointed by acclamation.

It is said, when a long rope falls into an unwitty hand, it does not take long for him to form a noose to hang himself. This is the situation of Martin Amidu. The President and the nation had been so patient with him during the entire course of his many preposterous demands, rejections and delays and in the end, he had no way to wriggle himself out of his many tactical lies in which he found himself mired but to resign. Shame on him!

When he found himself cornered without any further chance to tell lies to defer prosecuting anyone contrary to the purpose for the creation of the Office of the Special Prosecutor and his appointment, he had only to tender in his resignation. Not being intelligent despite his many paper qualifications and experience gained in the law profession, having practised for long and held many important positions in government, he had only to offer excuses for his resignation.

Truly, the wicked person runs away without anyone on their heels. Hon. Martin Amidu by all intent and purposes, has turned out as a malicious machismo individual harbouring selfish personal ambition to take a commanding position in Ghana where everyone must kowtow to him and do as he says.

When did the Agyapa Royalties deal come into play? Before then, how many cases had he investigated and successfully or unsuccessfully prosecuted? ZILCH! (None).

I started having my reservations about him back in 2019. I wanted to publish my views about disagreeing with his delay back in 2019 only to be professionally talked out of it by my brother-in-law, a lawyer. I had raised the topic of the dilly-dallying tactics by Hon. Martin Amidu investigating and prosecuting suspected corrupt officials with him, when he was driving me home after picking me up from the Kotoka International Airport in February 2019 on my holiday visit to Ghana.

He told me Martin needed time to investigate the cases properly before initiating any prosecutions since criminal suit is far different from civil suit. In criminal suit, your evidence must be 100% doubt-free. Should any shred of doubt be raised about your submitted evidence, the case will collapse unlike civil suit where judgment is based on preponderance of evidence. He told me it was for the fact of the Atta Mills’ NDC government rushing Kufour’s NPP suspected corrupt officials to court without solid evidence that all such corrupt cases levelled against them collapsed during the trials.

Thus far, Hon. Martin Amidu is viciously vindictive without the honest heart to fighting official corruption. All his attempts were public show off in pursuant of his selfish aims and objectives, I can say without fear.

I shall be back to take him on for deceiving me with his outward show of honesty to trust him whereas inwardly, he was not only full of, but overflowing with, dishonest intentions. I am disappointed in him. He was full of himself and now look at him, a shitty liar and coward drenched in sweat, recoiled into his shell, but still barking.

The populist capital gain or cheap political score the NDC are seeking from his resignation will not materialise.