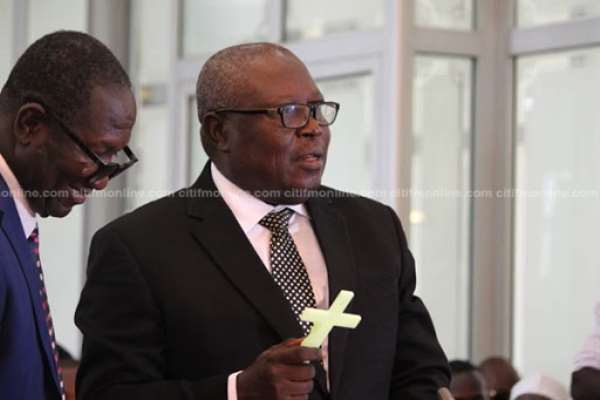 President Akufo-Addo sworn in a nine (9) member governing board to oversee the work of the office of the Special Prosecutor.

It is interesting to find a nation seeking to fight corruption, yet the Act establishing the office of the Special Prosecutor only becomes fully operational when there is a governing board to direct affairs.

Parliament passed a law in November 2017, to establish the office of the Special Prosecutor as a specialized agency to investigate specific cases of corruption involving public officers, politically- exposed persons as well as individuals in the private sector implicated in corrupt practices. The office was empowered by law to prosecute offenders on the authority of the Attorney- General.

Today, the leading image of the office of the Special prosecutor, has resigned over presidential interference of his work on the Agyapa Royalties limited transaction anti- corruption assessment report. Mr. Amidu in a letter stating reasons for his resignation, outlined a number of issues including a claim that, he was working with a seconded staff whom he had no control over.

Perhaps, Mr. Amidu should have noted from the beginning of his appointment that, his main challenge as a Special Prosecutor will be the obscurity of accountability amongst the various levels of governance major players. This is because the government as chief shareholder, holds overwhelming power and influence, which will always lead to interference in a work that portrays the hidden nature of this government against what they want masses to believe.

The president in a letter signed by his secretary, denied ever interfering or asking Mr. Amidu to abandon the Agyapa Royalties report so that he (the president) would deal with it.

But what makes Mr Amidu look very bad in the response of the president is the detailed explanation of how Martin Amidu did not recruit even though he was given the clearance to do so. An additional explanation that seeks to defend the president in his response is how budgetary allocations were made available to him, but he failed to spend.

However, it is captivating to find the concluding part of the president’s response about the office space for the OSP, perhaps, it explains clearly why Mr Amidu could not have recruited or spent the money allocated to his office.

In the president’s response, the search for suitable office space started and concluded between September 2019 and September 2020. That problem was resolved about two months ago. It is obvious that the three-bedroom office could not have contained the staff, assuming Mr Amidu had recruited. What could have been the use of spending if he didn’t recruit? Are we trying to blame Mr Amidu for not recruiting or spending the allocated money just after two months ago?

Looking carefully at the letter which Mr Amidu directed to the president, the board itself was not copied. I am of the firm belief that the board was not aware of his resignation. This deeply communicates Mr. Amidu’s position on fighting corruption with a nine (9) member board with divergent interests against his desire of fighting corruption regardless of who the fight affects.