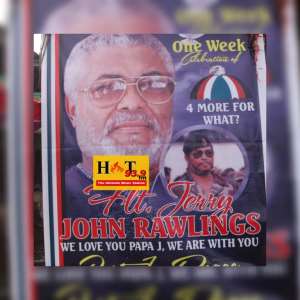 It would be recalled that the family of the late former President in a press release signed by the Communications Directorate on November 14, 2020, said there will be no one-week ceremony in honour of the late President.

According to the statement, “all flyers and other communication announcing such a ceremony are false and should be ignored.”

But Sympathizers of the opposition National Democratic Congress [NDC] at Agboado in the Odododiodoo constituency of the Greater Accra Region have defied the family’s order by organizing a one-week commemoration of the late former President.

At about 10:00 am, although most residents of Agboado were going about their normal duties, some were clad in red and black colours and others in the National Democratic Congress colours.

The leader of the group who is the Asafoanye of the NDC in the Odododiodoo Constituency, Patience Okani Laryea who spoke to Accra-based Hot93.9FM/Hotfm TV’s reporter Ernestina Afake, stated that:

“Because of the good life, good advice, and the peace we had during his tenure, we cannot leave him just like that as he is no more, we must show love to prove to all Ghanaians that Papa J has done some and that is why we are observing his one week in small sitting”.

Some residents also said they felt a great sense of loss when they heard the demise of the former President and had decided to mourn him.

According to them, the late President was really a great man and it would take a long time for Ghana to get such a humble, responsible, gentle, selfless, disciplined and wonderful person.

Below is the video of the NDC sympathizers in Odododiodio constituency observing one-week of the death of J.J