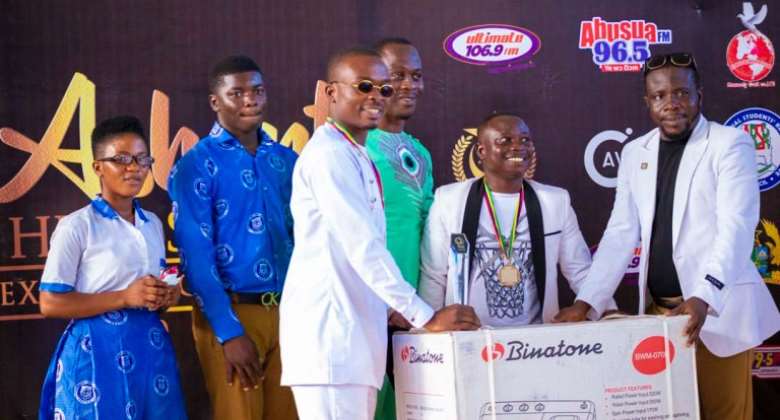 It was a red-letter day last Saturday at the Kumasi Anglican Senior High School auditorium when 138 SHSs in the Ashanti Region converged to be awarded for hard work and excellence.

The council used the occasion to hand over the power of the ARSRC regional executives to the new executives for the academic year 2020/21.

It was not surprising that the award committee upon intensive and rigorous analysis of work done in the various schools awarded Mr Nicholas Morkah a.k.a Royalboss, the local patron of Esaase Bontefufuo SHTS as the Most Outstanding SRC Patron.

In a document cited by modernGhana, it was revealed that Mr Nicholas Morkah had worked assiduously to receive the most enviable award and its bragging rights. Some of the amazing work the gentleman his team had done was that, through his links and effort to ensure students welfare, the school can boast of a complete mechanised borehole that saved the school from shutting in a water crisis last year November.

Through his initiative and lobbying, the school's streets have been graded and levelled for easy access for the first time in the school's history minimizing the gross erosion trenches on the compound just a few months ago. The 2020 local SRC week was extraordinary when he led the council to raise funds of over GH6,000.00 to organize a dinner and Excellence Awards to twelve teaching and non-teaching staff and twelve students accordingly.

The overall best teacher Mr Enock Amoako, received a plaque, a 13-litre gas cylinder, a double gas burner and many others. This was to motivate the spirit of hard work in a remote area and show appreciation to the dedicated staff and students.

His desire to bring Esaase Bontefufuo SHTS to the limelight qualified the school among the 32 schools in the 2020 UHSQ after three unsuccessful attempts.

The all-round patron has been a team player and a backbone to the school and the district at large. He Patrons SRC, PMSU, Cadet and GIMUN.

He took home the following as his prize: Binatone washing machine, a plaque, a medal and a certificate.

The EBSTECH Army Cadet is the most vibrant and standing cadet group in the Amansie West District. The group boast as the only local cadet group that have been able to visit the Achiase Jungle warfare ( St. Anthonys Barracks) in the Eastern Region to obtain an intensive military and physical training with certification.

Last year, at the Ashanti regional hiking at Mpasatia, the group won four different competitions. Earlier this year, the EBSTECH Army Cadet was selected among cadet groups to parade at the 63rd independence day parade at Baba Yara Sports Stadium.

Last year, the group were able to organize a mammoth week-long homecoming and reunion.

The event led to the cleanup exercise in the Esaase community followed by a grand durbar to raise funds to secure accoutrements and other logistics for the effective functioning of the group.

The army cadet took the opportunity to launch the only surviving magazine of the school. Dignitaries who graced the occasion include the Amansie West District Chief Executive's representative, Mr Chaslyn Nutsugah, Nana Asamoah - Korontehene of Esaase and his entourage, Asanko gold mines, BLOJ Company Limited - Tettrem, Staff, Old students and many more. The officer-in-charge of the corps, Mr Annor Collins, said he wishes the government will work through national cadet board to recruit highly disciplined cadet corps right from school into the national forces agencies.

The cadet took away a plaque and a medal.

The group made their first public appearance at the Armed forces SHS for LG audition programme in the year 2017 when Oduro Gyamfi Hayford took over as the LG patron. That was the first time the school was ever participating in such a programme together with the SRC executives. This was followed by an inaugural and outdooring of the group. Funds were raised to purchase instruments. The LG performed creditably well in the Carols night organised by the school.

In 2017, they got an invitation to attend "Gender Day Celebration" at the Amansie West District with a superb drama performance in which they were first runner-up to Mansoman SHS.

Naana Hayford's (the legend in acting and radio presentation) comments honoured the said programme and her judgement brought EBSTECH LG to the limelight.

The EBSTECH LG contested and participated in a 5-day inter-District and Municipal Cultural Festival-2018 in Tepa.

In 2019, they got an invitation from Osei Tutu SHS to attend Ypee SHS tour. Some of their students rocked shoulders with the so-called big schools in terms of rap, singing and comedy. That same year the LG attended audition programme at Kumasi girls followed by their maiden LG-day celebration at the school that brought about six sister schools including Osei Tutu SHS, Mpasatia SHS, Mansoman SHS, Manso Adubia SHS. It was the first-ever programme in the history of EBSTEC that brought more sister- schools on the same platform in acting, singing, choreography etc.

In 2019, the LG honoured an invitation from their sister School Nkawie SHTS during their SRC week celebration. The performances and the costumes they displayed was nothing short of excellence from a less endowed school like Esaase Bontefufuo SHTS.

Also, they took part in an SRC audition at Kumaca with their new LG printed Polo and T-shirts.

The EBSTECH LG participated in 2019 Telefest at Kumasi Girls SHS. They participated in all the categories except poetry, and their performance out there moved the organisers of High SKul TV to be part of their local SRC week celebration -2020.

Then, in the SRC week celebration, they brought Central Region to Ashanti for being the first school to introduce fancy dress and dancing in LG programme and hosted other sister schools during the LG Day celebration.

These and many working conditions prevailing at Esaase Bontefufuo SHTS and Mr Oduro Hayford's dedication to raising the image of the school on these platforms have been seen by many and sundry. It was not a surprise that his nomination was overwhelmingly welcomed by students, colleague teachers and students from other sister schools especially Mansoman SHS, Adubia SHS and Osei Tutu SHS.

Indeed, they have had the opportunity to inform, educate and entertain just as the motto of LG goes.

Upon an intensive assessment by the ARSRC awards committee, Mr Oduro Hayford Gyamfi emerged as the first runner up of the most outstanding Literary Group Patron -2020

He took home a standing fan, a plaque, a medal and a certificate.