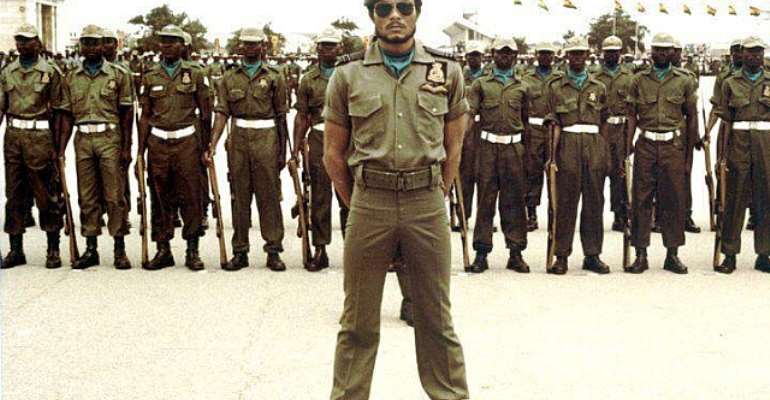 Independence of many African countries had come with a huge price. After independence, many countries in the sub-Saharan Africa had undergone serious breaches of democracy which saw militants taking overpower with guns in hand. Ghana had not been an exception. Since independence in 1957, the country had experienced more than five coups not counting the failed ones.

The notable among them are the 1966 coup which toppled Ghana’s first president, Kwame Nkrumah, and the 1979 AFRC coup led by the late Flt. Lt. J. J. Rawlings. These two coups became notable because of how remarkable they were in history. The former overthrew the first republic and the latter came with a series of atrocities which has not been witnessed in any of the five coups that has taken place in the country’s history.

More abuses took place after the 1979 coup which saw the killings of three prominent Supreme Court judges. Reports of missing prominent and ordinary Ghanaians were widespread and at the time over 200 civilians and military personnel got missing and never returned to their families.

The junior officers who were in high spirit and thought Ghana could be salvaged by their intervention later had their front being infiltrated by hatred, wickedness and deviating seriously from the very reason the coup was staged. In the process, they stepped on the toes of many innocent Ghanaians and ended up offending the conscience of well-meaning civilians.

Freedom of the press was curtailed and many journalists, lawyers, judges and even religious leaders fear for their lives at the time. Many would have thought that the AFRC culminating into PNDC after their second come back in December 1981 would tone down the atrocities and the abuses of human right. Unfortunately, it led to a mere show of viciousness from the military, mostly junior officers, and with a gun in hand, abused their office and the power vested in them to protect the sovereignty of the country.

At the National Reconciliation Council (NRC) set up by the former President Kuffuor in 2002, it revealed the ordeals many Ghanaians went through. The Archbishop Palmer Buckle, who was on the commission couldn’t hide his tears, and summarized his experience on what he heard and witnessed from victims as “Halloween”. During the days of the coup, many Ghanaians had run for their lives and many took into exile and some are yet to return.

The years of military juncture in this country had done a great disservice to our country’s democracy and the army, who were largely involved in these coups, cannot be exonerated or justified what so ever motivation that energize them to destabilize a democratic rule. Ghana’s democracy had been disturbed three times and many of the country’s illusion of underdevelopment and backwardness had been attributed to such misguided actions.

In 1966, the National Liberation Council (NLC) had tried to justify their reason for overthrowing Nkrumah citing reasons that do not meet consistency. They had accused Nkrumah of being authoritarian and perhaps abusing his office. Soldiers could not control themselves and appetite for power at that time, and did the unthinkable. This coup set the stage for all subsequent ones.

The military quickly saw the venture in using their office to rise to power anytime they want with the gun at hand. The 1972 coup and the rest of the coups did not also meet consistency in reasoning though all of them tried to justify their rise to power. It will interest you to know that these military men, who saw venture in abusing their office, did not have the requisite skill or knowledge to manage the country’s economy.

They ended up forming governments that are fragile and could not stand the test of time. They were many drains where subtle men in uniform in those days took the law into their own hands and infringed on basic right of the ordinary Ghanaian and set up the Kingaroo Military Tribunal to trial person without proper hearing. One cannot but to conclude that these coups where only staged for parochial interest and rode at the back of flimsy excuses. None of them did the country any good.

History will not forgive Ghana if it tried to accord credibility to any of the coups that took place in the era. Many of the things that the coup plotters themselves had espoused were baseless and meaningless and only came to amass wealth contrary to their clean up exercise campaigns they always mount.

We must close a docket on this kind of sordid past which no one will like to reflect on since many who were not present in the days will eventually end up breaking down. Our long stance democratic rule which started in January 1993 had largely been peaceful and Ghana had had the opportunity to undergo peaceful elections and transitions.

We give respect to our military that had seen the dignity of their office and will not in any attempt to disrupt the peace of the nation with any form of inconsistent reason to rising up to power. We also thank the United Nations for criminalizing coup actions and making the staging of coup unattractive for any soldier who daydreams about it.

We pay homage to all those who lost their lives during these military eras or days and plead with those who were and are wounded due to certain actions and inactions of these men in the uniform to kindly forgive and forget the past for good and forge on. The country had come from difficult times and the pieces are adding up after the disintegration and we must all help to uphold it. God indeed bless our homeland Ghana and make our nation great and strong.