Be Truthful About Rawlings 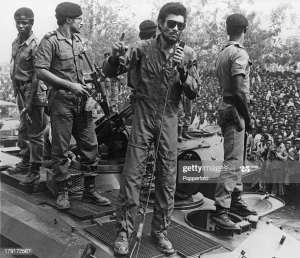 The only thing to admire about the late Jerry John Rawlings is that he twice handed over power to which he illegally acceded twice, first in June 1979, and the second in December 1981. In between his two rules, there were pogroms all over the country, wherein people were executed, tortured, beaten, exiled, raped, impaled and drowned. And so the question is, “What exactly are the bases of the present national angst about his death?” Our hypocrisy is becoming too much!

We claim that it is not culturally permissible to criticize the dead. That does not mean that it is culturally permissible to extol the dead, to ascribe to them superhuman status wherefore we are required to tell a panoply of lies about them. When the society permits all these lies to be spoken in praise of the dead, it also opens up the door for the truth to be spieled. If the society is not willing to tolerate the truth in the negative light, it must cease from conjuring up lies upon lies, and to pretend that a person suddenly turns into a saint as soon as he dies. That notion is both embarrassing and disgusting.

Exactly what did Rawlings do for Ghanaians that he should suddenly become a model for anything? He burst onto the stage on May 15, 1979 when he was arrested on a charge of staging a putsch. A more successful coup was staged on June 4, 1979 of which he knew nothing. Those who staged the coup released him from prison to head the government. But the coup itself was unnecessary because at the time of the so-called uprising, the ruling Supreme Military Council was already in the process of returning the nation to civilian rule.

Therefore, there was certainly no earthly reason for another military intervention. Be it as it may, the nation was receptive to the coup and supported Rawlings and his cabal to perpetrate a purge on the country. In this virtual pogrom, there were many military officers who were summarily executed without trial. Many soldiers and civilians were also killed or had their properties confiscated.

In the end, Rawlings reinstated the pathway to civilian rule and handed over power after a brief spell; only to return to power again on December 31, 1981 for no discernible reason. The nation came under curfew for several years, and again, many citizens were killed or incarcerated without trial, their assets seized, and their lives destroyed. Eventually, in 1992, the nation was returned to democratic rule wherefore Rawling stood for the presidency and was elected to serve two terms.

Neither the country nor Rawlings himself did anything to reduce their pain, except to occasionally cite their deaths in ridiculous anecdotes. These victims were generally accused of being corrupt by both Rawlings and his cronies without any trial or evidence, and the country as a whole has never done anything to honor all these people who were summarily executed, and whose names and reputations are permanently besmirched.

They were also citizens of this country who did nothing more or less than Rawlings. In their own collective conscience, they were also patriotic citizens who were attempting to do their very best for the country. And they also failed like Rawlings himself whose legacy remains generally ambivalent.

And exactly what did Rawlings do for Ghana that all these people he executed did not do? I have been trying hard to list the achievements of Rawlings, and the more I try, the more the irony of his epoch strikes me as rather bizarre. We may ask those others who risked their lives to save his. They will tell you that he betrayed them all. We may ask those of us who lived under the terror of his regime.

And we can only speak of his terror, his murder, his torture, his disrespect for the elderly and his general indiscipline. We may ask of his personal life, and those close to him will speak of his own moral degeneracy, his intellectual deficiency, his crass irresponsibility, his mendacity and exaggerations and fabrications and ingratitude and cruelty. And so who wants anybody to model his life after Rawlings?

Therefore Rawlings was no better that any of those who he killed or destroyed. And the nation did not benefit in any way from his rule. The only persons that benefited from Rawlings’ rule were Rawlings’ family and a select few of his minions. After destroying the educational system, he sent his own children abroad to have the best education. After going after those who, through their own industry, had become wealthy, he enriched himself on the back of the country, bequeathing to his wife the Nsawam Cannery and other state assets.

The economy was in shambles when he seized power, but the economy became worse with him in power. There is no benchmark of national progress or prosperity, or a measure of leadership which we can attribute to Rawlings. Except to say that he was the greatest source of insecurity for the country till his death. And it is this country that served Rawlings, not vice versa. He was not educated to any degree. He was not disciplined as an army officer. He did not achieve any feat in his life. He did not even write a memoir of any political theory or any ideas for posterity.

His greatest achievement is that he returned to the people the power that already belonged to them. Of this democratic dispensation for which people credit him, they conveniently forget that the nation was on the pathway to civilian rule when he first came to power to disrupt the process; and after handing over power to a civilian government, he again disrupted the democratic dispensation by overthrowing Limann’s regime. For nineteen years thereafter, the nation was drifting from socialism to capitalism and something in-between which nobody can describe.

And if a person steals power from the people and returns same to the people, what is the big deal? Is he of less larcenous or felonious intent? He himself never failed to express his hatred for multi-party democracy till his sudden death. So exactly how can our democracy be his legacy when he openly denigrated it at every opportunity? Certainly, without him and his coups, this country would have advanced a couple of decades more in its democratic dispensation.

Those who are in strident mourning of Jerry John Rawlings should tell us of his achievements for Ghana, or else they are hurting all those citizens and their families who lost so much under his mendacious interregnum.

In the alternative, the government could make his passing a rare opportunity to memorialize all those other people he unjustly murdered or destroyed. That will be some satisfactory way to pacify a country whose citizens are still hurting because of the acts and deeds of Jerry John Rawling.

Let's go on our knees and pray for Akufo-Addo for God's inte...
13 minutes ago

NDC race: I will retain my seat and help bring Mahama back t...
23 minutes ago