Agyapa Deal: Retrieve Billions Paid To Ofori-Atta's Databank, Otchere-Darko's ALA In 7days Or Face Our Wrath – NDC To Akufo-Addo 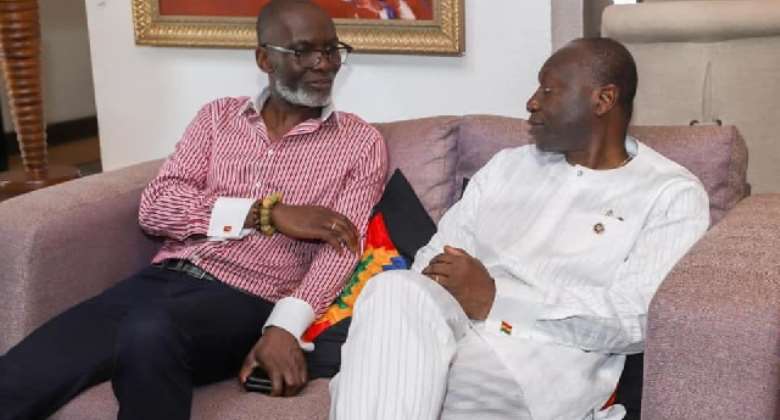 The National Democratic Congress (NDC) has demanded that President Nana Akufo-Addo retrieve, in seven days, all payments made by the government to Mr Gabby Asare Otchere-Darko’s law firm, African Legal Associates (ALA) as well as investment bank Databank, co-founded by Finance Minister Ken Ofori-Atta, in connection with what the party describes as the “stinking” and “nepotistic” Agyapa Royalties deal.

“The NDC hereby demands that President Akufo-Addo retrieve for the state, the billions of cedis his government has illegally paid under the shady Agyapa deal to Databank, which is owned by his cousin and Finance Minister Ken Ofori-Atta; African Legal Associates, which is owned by another cousin of his, Gabby Otchere-Darko; and their foreign compradors, within the next 7 days, failing which the NDC and other like-minded progressive forces, shall embark on series of protest and legal actions to ensure that every pesewa paid to these companies are refunded back to the State for nation-building”, General Secretary of the NDC, Mr Johnson Asiedu Nketia told journalists at the party’s 16th weekly media briefing on Tuesday, 10 November 2020.

Mr Nketia also said anyone who may have played any role in the “shady” Agyapa Royalties “scam”, which, to the party, is fraught with “fraud, thievery, nepotism and cronyism”, will not go scot-free in a future Mahama government.

Mr Asiedu Nketia said: “We have long held the position that the Agyapa deal was fraught with illegalities and driven by corruption, cronyism and sheer greed, all in furtherance of the state-capture agenda of President Akufo-Addo”.

He said the recent damning verdict of Special Prosecutor Martin Amidu on the deal after his corruption and anti-corruption risk assessment, vindicates the NDC’s position that it was “a corrupt deal, cooked within the corridors of power for the benefit of a few greedy family relatives of President Akufo-Addo, at the expense of the state”.

In the party’s view, the “whole Agyapa deal is daylight robbery” as found by the OSP, which said the transaction processes and Mandate Agreement violated the Public Procurement Act, the Financial Management Act, and the 1992 Constitution of Ghana, hence null and void.

“As a matter of fact, the processes leading to the transaction agreements and Mandate Agreement were shady, opaque and fraught with procurement rigging, stonewalling, fraud, statutory and constitutional breaches”, Mr Asiedu Nketia added, noting: “The valuation of our gold royalties and transaction agreements that President Akufo-Addo and his corrupt New Patriotic Party approved was a rip-off and an affront to the sovereignty of our dear nation”.

He wondered by Finance Minister Ken Ofori-Atta and his Deputy Charles Adu Boahen are still at post over the matter.

“The NDC is appalled by the refusal of President Akufo-Addo to crack the whip on the Finance Minister Ken Ofori-Atta, who supervised this daylight heist, and his Deputy, Charles Adu Boahen, who fraudulently signed the Mandate Agreement when he had no locus to do so under our laws”.

“It is sad but unsurprising, that these government officials who are responsible for the shady Agyapa deal, which has occasioned a huge financial loss to the nation, are still at post. In any serious country, Ken Ofori-Atta and Charles Adu Boahen would have been suspended pending criminal investigations or under criminal prosecution by now. Sadly, in our case, President Akufo-Addo has decided to shield these corrupt officials from punishment, as he usually does”, Mr Asiedu Nketia noted.

He, thus, warned that Mr Mahama, should he win the 7 December 2020 polls, will not let the matter go unpunished.

“We must serve notice that this Agyapa scam, like other similar corrupt acts of the Akufo-Addo government, will not go unpunished. We have just about twenty-seven days to vote for change like the Americans have done. The new government of His Excellency John Dramani Mahama and the NDC Insha Allah, shall investigate this Agyapa robbery and punish all the culprits and masterminds behind it through the Operation Sting crusade. Let it be known that crime has no expiry date. It is just a matter of time. Thank you for your attention”.

More from NDC News
ModernGhana Links
'Russia-Ukraine war, covid-19 pushed us to IMF but NDC went due to mismanagement' — Afenyo-Markin jabs Minority
'Mahama has finished his eight years, let's change him or else we will lose 2024 elections' — Yaw Boateng Gyan
Politics is all about positive impacts — Nii Armah Ashietey
TOP STORIES