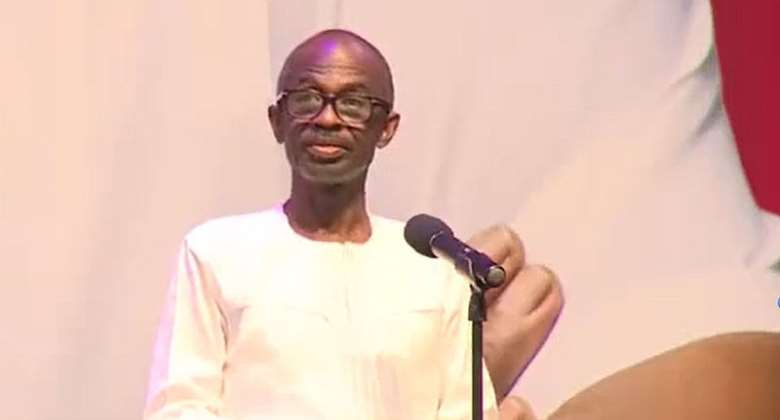 The party says it is appalled by President Akufo-Addo’s refusal to crack the whip on Finance Minister Ken Ofori-Atta, and Deputy Finance Minister Charles Adu Boahen whom the Special Prosecutor accused of illegally signing the deal.

At a media briefing today, Tuesday, November 10, 2020, the General Secretary of NDC, Johnson Asiedu Nketia accused President Akufo-Addo of shielding officials found to have contravened state laws in pushing the deal through.

Mr. Asiedu added that lack of action from President Akufo-Addo shows that he is a “chief enabler and promoter of corruption in his government”.

“We must state without any equivocation, that the attitude of President Akufo Addo who has earned the unenviable reputation of being the “Chief Corruption Clearing Agent”, does not come as a surprise to us in the NDC. This is exactly what nepotism does to a country. It completely blinds leaders and weakens their ability to crack the whip on their errant and corrupt appointees.”

“We are therefore not surprised that President Akufo Addo has not shown any interest whatsoever, in punishing his corrupt officials who have been found culpable in this Agyapa imbroglio and retrieving billions of taxpayers monies that have been paid under the shady deal. President Akufo Addo has time and again, proven to be the chief enabler and promoter of corruption in his government. He has continuously defended and shielded his corrupt officials from punishment since he took office as was witnessed in the BOSTGATE corruption scandal, PDS scandal, missing excavators’ scandal, Australian VISA fraud scandal, just to mention a few.”

What did the OSP say?

In his corruption risk assessment of the much-talked-about transaction, the Special Prosecutor argued that consultations over the agreement were not comprehensive and innovative enough.

He also disclosed that the selection and appointment of advisors for the agreement did not meet the “fundamentals of probity, transparency, and accountability.”

Mr Amidu in his report took a swipe at the various officials who took part in the processes leading to the approval of the agreement.

According to him, the actors flouted several laws with impunity prior to the approval of the agreement.

“All the parties to the Mandate Agreement are deemed to have known the law but ignored it with impunity in signing and implementing the Mandate Agreement which is null and void ab initio as violating the Public Financial Management Act, 2016 (Act 921) and the Public Procurement Authority Procurement Act, 2003 (Act 663) as amended. This conduct which appears to have been in furtherance of the suspected bid-rigging, in the assessment of this Office severely lowered the risk of corruption, and rendered them a low-risk enterprise in the Agyapa Royalties Transactions process and their approval.”

His 64-paged document added that: “It is with these new lenses that the analysis of the risk of corruption, and anti-corruption assessments of the legality of the engagement of the other services providers and underwriters on the recommendations of the Transaction Advisors acting as the Ministry of Finance's procurement entity tender committee contrary to Part VI of the Public Procurement Act, 2003 (Act 663) as amended, and Sections 7 and 25 of the Public Financial Management Act, 2016 (Act 921) afore-quoted were made.” About the deal

In 2018, Parliament passed the Minerals Income Investment Fund Act 2018 which establishes the Fund to manage the equity interests of Ghana in mining companies and receive royalties on behalf of the government.

This was after Parliament on August 14, 2020, approved the Agyapa Mineral Royalty Limited agreement with the Government of Ghana despite the walkout by the Minority.

The company was scheduled to raise between $500 million and $750 million for the government on the Ghana and London Stock exchanges to invest in developmental projects.

More from NDC News
ModernGhana Links
'Russia-Ukraine war, covid-19 pushed us to IMF but NDC went due to mismanagement' — Afenyo-Markin jabs Minority
'Mahama has finished his eight years, let's change him or else we will lose 2024 elections' — Yaw Boateng Gyan
Politics is all about positive impacts — Nii Armah Ashietey
TOP STORIES