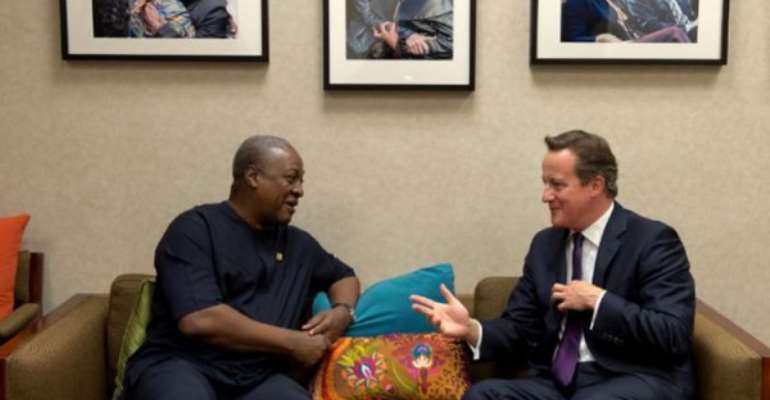 Since the birth of her 4th Republic through the promulgation of the 1992 Constitution, Ghana has periodically held elections every 4 years without fail. These elections have always been preceded by a series of activities, prominent of which is the launch of manifestos, political party's opinions plans and promises to the people for which they should be voted into power.

Manifestos have become a mark of multiparty democracy in many countries and Ghana is no exception. In effective democracies, they serve as an unbiased marker by which a government's success is measured, and are instrumental in enabling the citizenry to hold various parties that win power accountable.

Manifestos are policy intentions for the future. With the 2020 General Elections fast approaching, we are in the season of manifestos and conversations around policies and ideas for governance are the order of the day.

The two main political parties have all launched their manifestos, each with a foreign policy component.

Foreign policy components of manifestos serve as a guide or indication on how a political party believes the country should proceed in prosecuting its interests' externally.

It is worth mentioning that, of all the political parties contesting in this year's elections, only the NDC and the NPP have launched manifestos that explicitly contain foreign policy positions.

Thus, this article seeks to shed light on foreign policy positions as stated in the 2020 manifestos of the NDC and the NPP.

On the 22nd of August 2020, the ruling New Patriotic Party launched its Manifesto on the theme: “Leadership of Service: Protecting our progress, Transforming Ghana for all.”

Led by President Nana Addo Danquah Akuffo-Addo, the governing NPP made 9 main promises for Ghana's Foreign Policy, to be implemented between the years 2021-2025.

1. Continue to promote and support ECOWAS and the AU domestically and internationally to accelerate the pace of regional and continental integration and engage as a united front in global relations.

2. As the host country of the Secretariat of the African Continental Free Trade Area (AfCFTA), be very active in seeing to the operationalisation and success of AfCFTA.

3. Expand the level of engagement with and promote the interests of the Ghanaian and African Diaspora.

5. Strengthen our engagement, among others, at the multilateral level including Sessions of the United Nations General Assembly, United Nations and other international Conferences, Commonwealth Heads of Government Meetings, and La Francophonie (OIF).

7. Strengthen relations with countries in the Americas, the Caribbean, and Asia. Introduce chip-embedded passports to keep up with technological advancement and enhance the security of Ghanaian passports.

The siting of the African Continental Free Trade Area (AFCTA) Secretariat in Accra is a significant foreign policy variable.

AFCTA features prominently in both manifestoes for the 2020 election.

For the purpose of this article, these positions/promises have been broadly categorized into 7 thematic areas:

In this manifesto, the NDC put forth 17 “Promises” for the conduct of Ghana's international relations.

The promises and policy positions by the NDC include;

2. Enhance the general conditions of service for Foreign Service Staff including restoring duty waivers on vehicles for staff returning from postings.

3. Leverage and place Ghana's hosting of the AfCFTA Secretariat at the heart of our industrialisation drive by ensuring that Ghana becomes Africa's trade, transport and investment hub.

5. Establish a Consular Support Fund as a line item in the budget of the Ministry of Foreign Affairs and Regional Integration to cater for distressed Ghanaians abroad who may require urgent consular assistance.

6. Conduct an asset inventory of all diplomatic properties with the view to pursuing an aggressive asset improvement and maintenance programme - this review will also seek to address the phenomenon of unsustainable expenditure on rent in favour of the more economically prudent option of owning our own properties.

7. Deepen Ghana's famed Pan African credentials by putting forth a raft of policies targeted at forging stronger and concrete bonds with Africans in the Diaspora and African Americans beyond the occasional visits afforded by “PANAFEST” and “The Year of Return” to a more permanent mutually benefiting relationship.

8. Ensure that consistent with our track record, we will actively canvass for many more Ghanaians to assume high offices in reputable multilateral organisations.

9. Renew our commitment to the UN Sustainable Development Goals and the AU's Agenda 2063 by fully domesticating and aligning our development goals across all sectors with these global imperatives.

11. Improve conditions of engagement and also increase the number of females in troop deployment consistent with modern UN standards.

12. Protect the inviolability of the premises of all Foreign Missions in Ghana as required under the 1961 Vienna Convention on Diplomatic Relations and the 1963 Vienna Convention on Consular Relations in order to avoid the recent embarrassing spectacle which created a diplomatic stand-off between Ghana and Nigeria when the latter's properties were demolished in Accra.

13. Reappraise the geographical representation and economic significance of our diplomatic and consular missions and establish new missions strategic to our national development especially in the areas of trade and investment, tourism, and educational opportunities.

15. Continue to play an active and lead role in ECOWAS and work in concert with other member states to consolidate the gains of the Community and to achieve its defined goals.

17. Deepen our involvement in the affairs of the Francophone and UEMOA with a view to better understand those organisations and reaping the maximum benefits from them given our geographical position of being surrounded by three Francophone countries.

For the purpose of this article, these positions/promises have been broadly categorized under 10 thematic areas:

The two main political parties in Ghana have laid out their plans for the next four years of Ghana's Foreign Policy.

An analysis of the various plans and promises shows that they are all in line with the directive principles of state policy as captured in the 1992 Constitution of Ghana.

The NPP and NDC Manifestos converge on six themes namely:

Key differences between the two manifestos' position on Foreign policy include;

I. Passport Administration in the NPP manifesto captured in Promise 8 & 9

III. Peacekeeping in the NDC manifesto captured in Promise10 & 11

IV. Diplomatic Missions in the NDC Manifesto captured in Promise 6 & 13

Although differences have been identified, the points of intersection noted above can be instrumental in finally ensuring that there is continuity and sustainability in Ghana's Foreign Policy going into the future.

GhIIA.org (Institute of International Affairs, Ghana) is a policy think tank based in Accra. The Institute seeks to advance policy dialogue, innovation and analyses as regard International Relations issues in Ghana and West Africa.