Ascribing Luck To The Position Of A Presidential Candidate On The Ballot Paper: A Much Ado About Nothing 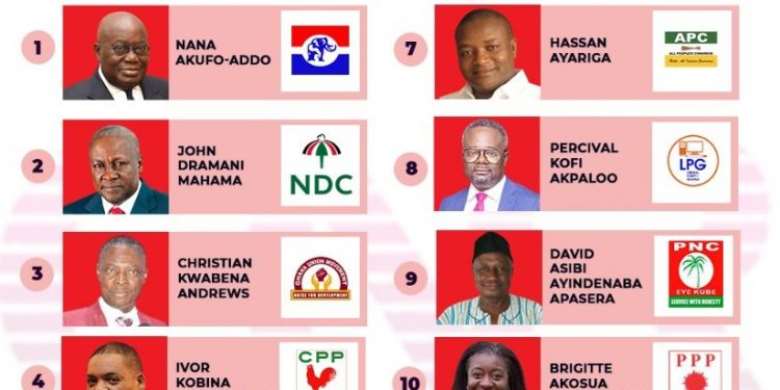 The myth surrounding the supposed luck that comes with the position of political parties' presidential candidates can simply be demystified with some little effort that focuses on the history of some elections held in this republic, the 4th Republican democratic dispensation.

Going through the archives, one wonders why numerologists and spiritualists are accorded some scintilla of credence, even in limited proportions for the claim that one presidential candidate or the other would win an election simply based on the position he or she is placed on the ballot.

Notwithstanding the above however, I am amenable to that school of thought that suggests that some positions of a presidential candidate on the ballot is advantageous but on the basis of only easy identification of candidates viz-a-viz their positions.

Undeniably, positions like first, second, third or last are easily identifiable but most importantly, the branding of a political party with colours and symbols which appeal to the eyes of the voter as well as the credibility of its presidential candidate and the viability of its manifesto are crucially important in this regard as only the uneducated masses of our voting population would vote simply because of the position of a candidate. Even this, the elephant and the umbrella which are the symbols for the two major players of our elections are known to all and sundry including the uneducated voters.

Although the presidential candidate for the National Democratic Congress (NDC), John Dramani Mahama placed 1st and won the 2012 elections, the point ought to be made vociferously that he would still have won irrespective of the position because it defies logic for the majority of the voting public to vote for a candidate and the results changed simply because that candidate was not placed 1st, 2nd or last.

In furtherance of the above is that classical example of the 2016 election in which the presidential candidate of the New Patriotic Party (NPP), Nana Addo Danquah Akufo-Addo placed 5th on the ballot, a position which was neither 1st, 2nd nor last yet he won with an overriding proportion of vote difference unprecedented in the history of this republic. The same candidate placed last in the 2008 elections, do you remember the famous 'ase3 ho' slogan? A slogan which was popularised and became easily identifiable on the ballot but he lost that elections marginally to John Evan's Atta Mills of blessed memory.

If you will lose, eating one sack of salt will not help matters.