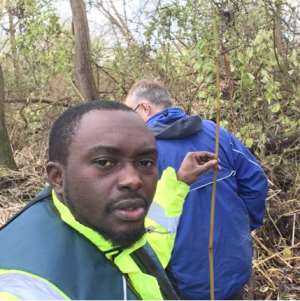 Most of African countries have suffered from flood incidents and it has destroyed most important infrastructures, impacting millions and killing people annually. It has been reported that flooding across Sub-Saharan Africa has destroyed more than 10,000 homes and affected more than two million people. On June 3, 2015, a flood in Accra followed by a filing station gas explosion killed 150 people. The disaster also affected more than 50,000 residents in Accra. The cost of the damaged was estimated at 242 million cedis or 55 million US dollars.

Rapid urbanisation and population influx have intensified the city capacities and services around Accra. Of its many challenges are urban flooding and solid waste management. A simple public service in each are often lacking in Accra and the two sectors interact as solid waste blocks drainage flows, resulting in flood during rainfall. Accra is expanding at a rate much faster than flood risk management plans are developed and infrastructure installed. The existing systems are additionally not furnished to accommodate changing and increasing runoff patterns caused by climate change and increase in impervious areas. These pressures are experienced by the informal settlements in Accra, where impromptu dwellings often expand into flood risk areas, low-lying areas or existing drainage channels.

No single approach will ever be universally successful to address this recurrent problem. Addressing this inter-sector issue requires a combination of actions that suits that locality, involving various actors, including community members, the private sector, and AMA. The 2007 floods in Accra caused hundreds of people to leave their houses and move to safer locations. Similar situations occurred in 1995, 1999, 2001, 2008 and 2011, 2015 and recently 2020 causing havoc. Local flooding in Accra is often attributed to blocked drainage caused by poor waste management. However, populations in Accra are hardly aware of the drainage issues associated with flooding and regard waste management as the role of the government. It is observed that the population are not resilient and adaptive to the existing risk and the level of preparedness, recovery and response is very poor.

The solution
The proposed solution aims to address interplaying issues of solid waste management and urban flood risk. Inclusion of public involvement and education is also critical to develop and maintain a healthy, lively city. Each of these sectors could have their own strategy with its own goals, objectives, and action plans. Instead of encouraging city governments to develop yet another strategy specific to this cross-sector model, this solution suggests development of a supplemental action plan. This action plan can support already existing strategies. Some actions that generally pertain to public involvement and education could be instrumental in meeting a solid waste management objective, or vice versa. There could be actions that are inherently inter-sector, such as organising a public cleaning event. Interplay between Solid Waste and Urban Flood Risk Developing a Supplemental Action Plan. Similarly, solid waste management and urban drainage can have overlapping objectives and actions, such as installing drainage covers or screens to catch waste in runoff and cleaning accumulated waste out of gutters. The capacity to think cross-sector when planning strategies and projects can be critical in reaching the larger common city vision. This solution presents actions that city planners can employ to develop a comprehensive supplemental action plan, which supports and fills in gaps in the public involvement and education, solid waste management, and urban drainage sectors. Specific objectives and practical actions depend entirely on Accra unique situation.

a. Public Involvement and Education
Collaboration between AMA and residents, community groups, industries, and private companies to form the foundation is crucial. Investment in the public involvement and education sector helps address the interplaying issues surrounding waste accumulation in drainages that extend beyond a city government’s capacity to manage in any moment in time. Specifically, investment in this sector addresses the following two needs.


To address the interplay of domestic solid waste and urban flood risk, the city of Accra needs to first and foremost establish waste collection and transport systems. If domestic waste is effectively removed from the city landscape, it would prevent any from accumulating and blocking city drainage systems, which causes flooding and public health issues. Citywide services are critical to provide residents a clear way to dispose of waste generated. However, if a city is to collect waste, there needs to be a place for the waste to go. Hence, investment in waste collection and transport must inherently include investment in the entire waste stream. The most simple and quickest approach is to establish a sanitary landfill, where waste can be responsibly disposed in a manner that minimizes environmental and health risks. However, waste management services that lead to waste disposal is neither best practice nor the most socially or environmentally sustainable. This linear system waste where raw materials are extracted from the environment to produce a product, which may be used once and then dispose it in a landfill at the end. Such system constrained the environment and city services. Circular Economy thinking provides sustainable alternatives by focusing on prevention, minimisation, or reduction of resources use and by identifying opportunities to reuse, recycle, or recover resources from waste. Reducing environmental and resources demands throughout the product life cycle also helps reduce emissions of greenhouse gases and mitigate climate change.

Urban Drainage infrastructure collects and conveys rainwater from urban areas into waterbodies to prevent urban flooding. This infrastructure is particularly important in urban settings because:

Combined sewer systems are sewers (CSS) that are designed to collect rainwater runoff, domestic sewage, and industrial wastewater in the same pipe. Most of the time, combined sewer systems transport all their wastewater to a sewage treatment plant, where it is treated and then discharged to a water body. During periods of heavy rainfall, however, the wastewater volume in a combined sewer system can exceed the capacity of the sewer system or treatment plant. For this reason, combined sewer systems are designed to overflow occasionally and discharge excess wastewater directly to nearby streams, rivers, or other water bodies. In comparison, separate sewer systems (SSS) provide separate networks for the two discharge streams. Impervious areas, however, significantly reduce infiltration and increase surface runoff, which collects in gutters and drainage channels as stormwater or in ponds or detention basins. Detention basins provide storage of runoff and an opportunity for infiltration, helping to decrease flows within the urban drainage system and receiving natural waterbodies. Runoff enter underground pipes that carry domestic wastewater, which requires treatment before being discharged into a nearby water body. There can be underground storage to control flow throughout the system, accommodate times of high flow, and to reduce combined sewer overflows (CSOs). CSOs are untreated discharges from CSS, necessary to prevent upstream flooding, but detrimental to the water quality and environment of the receiving water body. Waste that accumulates in these structures can restrict runoff from entering the urban drainage system and cause flood. At the same time, in developing countries, urban drainage infrastructure capacity itself is usually inadequate to cope with runoff. Addressing systemwide urban drainage challenges require examining the entire system. This solution does not present a holistic approach to urban drainage planning and design but provides some suggested actions to a rapidly growing city, explaining important considerations when expanding or improving existing urban drainage systems.

Sustainable Urban Drainage Systems – better known as SUDS – are designed to lower the risks of flooding in any area by creating more efficient means of draining water from areas prone to flooding without over-filling our existing drainage system.

A significant contributor to the issue of flooding is the continual expansion and densification of urban areas. These town and city areas tend to be built up using great expanses of impermeable materials which prevent rainwater from draining away as it falls, and this has become a major factor in the floods which have befallen the Accra in recent years. Our old drainage systems simply can’t cope with the amount of rain they’re expected to handle.

What does a Sustainable Urban Drainage System do?

Creation of more permeable surfaces. The improvement of drainage and the reduction of the risk of flooding are dependent upon the introduction of permeable outdoor surfaces. More permeable surfaces include gravel, blocks, or tiles with spaces left between them to allow for drainage through to a layer of soil. This SUDS method has many applications and is popular with many kinds of property. For this to work, the underlying soil must also be permeable, so a heavily clay-based soil is no good. The soil also needs to be clean and contaminant-free to avoid any harmful substances being washed into another body of water where it could cause environmental damage.

Rainwater harvesting. There are several good reasons to harvest rainwater rather than allowing it to wash away. Preventing rainwater from getting to the drains both reduces the risk of flooding and saves that water for practical uses around the home. Rainwater is great for use in washing, cleaning, gardening, and toilet flushing. Whether using a simple water butt in the garden or a more complex underground rainwater harvesting system, there is plenty that can be done with water saved from running off the roof and into the drains.

Formation of ditches, ponds, and wetlands. Sometimes, a more obvious landscape feature can be used to prevent flooding. Manmade ponds, ditches, and wetlands can effectively control the rate at which water drains away from a densely built-up area. Water is collected and then gradually released by a process known as attenuation. When completely drained, these spaces blend into the wider landscape and are usually covered with grass or other vegetation.

Green Roofing. A relative newcomer to the building site, green roofs are sprouting all over the place. Although they have been used throughout history, they have recently enjoyed something of a renaissance as designers strive to become more environmentally responsible in their practices. Whilst green roofs slow down the rate at which water reaches the ground and drainage systems, they also provide other advantages such as air purification wildlife habitat, and home insulation.