Between Two Devils; NPP and NDC 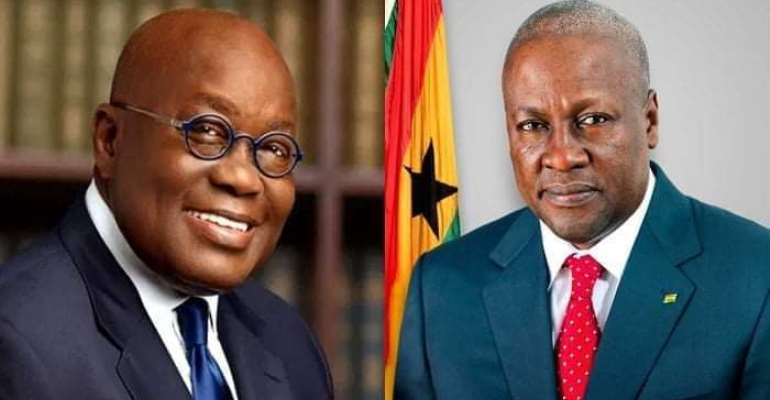 I am highly embarrassed about the way politics is played in Ghana. It is near insanity to be involved in party politics in this country. One cannot even be opinionated or fully express themselves without being tagged NPP or NDC depending on whose side his argument favours or is against at that given material moment.

Some of the highly partisan citizens who are too clouded by party loyalty no longer even believe in neutrals; they see everybody with the same lens and will fight you with all their strength even if you genuinely criticise their cult leader. This makes it cumbersome for some well-meaning Ghanaians to add their voices to the national discourse.

However, writers like me whose duty it is to either provoke or prevent change based on the current happenings of our society cannot keep silent when things are getting out of hand. I am a Ghanaian and part of the society, therefore I owe it to myself, son, family and the entire community I find myself to speak to very critical issues of national concern whenever the need arises. I believe in freedom of speech, and I think that it is one of the bases of democracy; though, I also think that some of us abuse that freedom for our own parochial gains or interest.

It is conspicuous why I titled this article “Between Two Devils"… NPP and NDC are the two main devils we have in this country, but we can begin to look at the lesser devil since we seem not to have any immediate replacement for these two parties. I can be a bit more honest with my opinion or assessment of these two devils given the fact that I have witnessed their reigns for the past two decades without actively rooting for any.

I can confidently say that I am apolitical, though we are all considered to be political animals. In this country of ours, it makes more sense to be politically neutral, unbiased, non-aligned, free from party politics for your own dignity and peace of mind; since many of the people are not open-minded enough and are only concerned about their own interest.

I hope that a time will come where the general populace will address or comment on issues of national concern with open minds, and be apolitical and independent of any political party; with that, they can see clearly and make sane decisions.

The propaganda their party communicators and footsoldiers do every day on our radios and TVs is just for their own benefits, because they enjoy a lot of riches, fame and power when they are in office; for this reason, they will do everything and anything to stay in power or come into power.

But someone like me who has no personal gains to make when either of them is in power can be a bit more objective in choosing a lesser devil or evil. Self-interest colours our perceptions and we try to rationalise things, but when one has no self-interest, then we can trust their judgements on certain matters.

What has impressed me most about John Mahama's government, despite his 8 months battle in court to defend his legitimacy as the President of Ghana, is the massive infrastructure development he invested in, like the new schools and hospitals he built across the country and the roads he did are all very clear for everyone to see if even they do not like him.

JM provided modern hospitals and upgraded some of the already existing ones for speedy and quality health-care delivery. He built polyclinics and chips compounds. For example, the major renovation of the Greater Accra Regional hospital and the addition of ultra-modern facilities making it a more befitting and a state of the art hospital in the capital city of Ghana.

These are physical structures the man built which people can see and touch. In the area of education, JM built many Community Day Senior High Schools and some Basic Schools across the country and these schools are also physical structures we can all see and touch. The Colleges of Education and the Nursing Training Colleges admitted far more students during his tenure, hence the cancellation of their monthly allowances.

He built many roads as well and some of the road projects are: Tarkwa-Bogoso-Anyanfuri road, 37-El-Wak- Trade Fair road, Kwame Nkrumah Interchange, Sofoline, Pokuase Interchange, Achimota-Ofankor road, Awoshie-Pokuase road, Kasoa Overhead bridge, Expansion of the Takoradi and Tema harbours, Construction of Terminal (T3) of Kotoka International Airport, Sekondi-Takoradi-Kojokrom railway line and many others. He also built central markets in both Kumasi and Cape Coast and these structures or roads are visible and can also be touched.

Despite the accusations by the NPP of massive corruption during his tenure of office, we as discerning people know that massive political corruption is usual with almost all the political regimes in Ghana, including that of the current government. They are both involved in this corruption, the reason why I refer to them as ‘two devils’… because they are just wearing different colours, but they are the same people.

To further talk about JM in office, in the energy sector, there were a series of power outages that caused the entire nation great harm. The power crises then really made him unpopular, but he had it sorted out before he left office by deploying emergency plants and speeding up the completion of ongoing plants which resulted in the addition of more than 800 megawatts (MW) of power within 18 months. Ex-President John Mahama did very well in the area of infrastructure development.

I would not be able to list all his achievements I know of here, but my point is, it is public knowledge that the man did better than all our presidents in that area, except Dr Kwame Nkrumah our first president.

I did not really realise how much he had performed, until recently when I started doing more research about his projects and his time in office. The opposition parties, especially the NPP, really did massive propaganda and that gave them the trump card to also come to power. As for the looting, it is the normal thing with most African politicians.

I do not really know why JM wants to come back, because I feel that he has self-actualised and has personally achieved so much in life. It would not be a bad idea anyway, to give him the mandate to lead again comparing his 4-year leadership to that of this current government.

President Nana Akufo Addo’s government with over one hundred and ten ministers promised to do so many things for us but has only delivered a few in four years. However, I will highlight some of his major achievements in office that I know of so that you can also do your own comparison and choose who to vote for in the 7th December 2020 general elections.

One of Akufo Addo's major achievements that even a child in his mother’s womb knows of, is the popular Free Senior High School Education Policy. I think making SHS free was one of the first things he did for Ghanaians as a president. I have always been a fan of socialism and have always preached that the national cake should be distributed fairly so that the poor man can also do something meaningful with his life. It is no doubt that thousands of students are benefiting from this free education policy and it will certainly boost the literacy rate of the Ghanaian population, but there are issues of quality being raised which I think are critical and have to be looked at before it gets worse.

He has also created the Nation Builders Corps (NABCO). According to the government, it has temporarily employed one hundred thousand (100,000) youths in the country with a monthly stipend of seven hundred Ghana cedis (GHS700.00). It is a 3-year contract between the government and the NaBCO employees.

I know a few university graduates who are benefiting from this. Half a loaf, they say, has always been better than none; at least, it has taken some burden off some parents who were still catering for their adult children who are with university degrees and diplomas. But I think the president can look into it again and make them permanent workers and increase their wages to something more decent.

The College of Education and the Nursing College monthly allowances that John Mahama's government cancelled was restored by President Nana Akufo Addo. The cancellation of these allowances somewhat made JM unpopular, though he explained why the cancellation was necessary, but the people were not convinced, hence punished him for it.

However, I also do not have any concrete evidence of the non-existence of many of these factories. If you have seen them and know people who work in them, then I just need to do more research and be more convinced about them like I have personally seen and used some of John Mahama's projects.

The President has also empowered the National Identification Authority to register Ghanaian citizens and give them the Ghana Card so that we can easily be identified as Ghanaians. I have also read that Mr President has constructed or is constructing some major roads and interchanges in Tema and other places in the country.

To bring this comparison between John Mahama and Nana Akufo Addo to an end, I will like to say that John Mahama's achievements surpass that of President Nana Akufo Addo, especially in the area of infrastructure.

I have intentionally decided not to talk about their failures, corruption, nepotism, power drunkenness and the huge loans they both took from abroad. The NDC has always argued that the NPP has taken more loans than them in just four years in government, yet have achieved less and the NPP has always also talked about the bloated budgets the NDC prepared while in office.

So to me, none of them is really a better government, but we have no option. Perhaps, our only option is to choose between two devils and I have decided to choose the lesser devil; and that is John Mahama considering the massive infrastructure development he gave the people of Ghana and the freedom of speech we enjoyed while he was in office…

I am not really a fan of many of these current crops of African politicians simply because of their dishonesty, corruption, power drunkenness and the political gimmicks they play with their followers. Many of them are millionaires and billionaires, ask yourself, wherefrom all these millions and billions that they have?

I admire very much past leaders like Thomas Sankara, Patrice Lumumba, Dr Kwame Nkrumah, Nelson Mandela, Prof. Atta Mills and a few others who did not enter politics because of wealth and power, but just wanted to truly liberate the suffering masses and give them dignity.