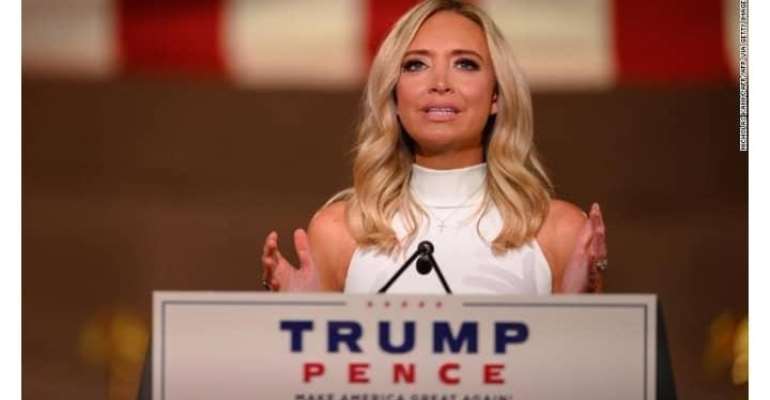 White House Press Secretary Kayleigh McEnany announced Monday that she has tested positive for the coronavirus, another sign that the virus that has put President Trump in the hospital and killed more than 200,000 Americans is spreading through the White House.

In a statement on Twitter, McEnany said she is not experiencing symptoms. In addition to the president and the first lady, members of Trump’s staff and senior figures in his campaign have tested positive for the coronavirus since last week.

McEnany said she did not know that senior Trump aide Hope Hicks tested positive for the virus before McEnany held a press briefing Thursday without a mask, a decision that has come under scrutiny for potentially exposing reporters and others present.

The president was being treated at Walter Reed National Military Medical Center for the fourth day Monday but his doctors did not release any additional information about his condition.

His Twitter account was active throughout the morning, however, with unrelated political messages, mostly in all-capital letters, urging supporters to vote. It is unclear whether Trump or his social media aide Dan Scavino wrote them.

Trump has been eager to send the message that he is fully engaged, releasing pictures and videos of himself sitting at a table at Walter Reed, sometimes with papers in front of him.

His most audacious gambit, a joyride in the presidential motorcade Sunday evening, has drawn sharp criticism for endangering Secret Service agents and others involved in keeping him safe.

Though the disease has taken Trump off the campaign trail for the final stretch, his advisors say they are continuing at least some activities without interruption.

Tim Murtaugh, who heads campaign communications, said in an email that Bill Stepien, the campaign manager, remains in charge despite a COVID-19 diagnosis.

“His symptoms are mild and he is heavily engaged, as always, while working remotely,” Murtaugh wrote.

Ronna McDaniel, the chairwoman of the Republican National Committee, has also tested positive and Brad Parascale, the former campaign manager who had remained in charge of digital operations, left the campaign after a recent psychiatric episode.

Murtaugh also said there would be no change in the campaign’s door-knocking operations, despite the potential risk of further disease spread.

At least three Republican senators have tested positive for the virus, while others are in quarantine.

Senate Minority Leader Charles E. Schumer again criticized Republican leaders’ plans to move forward with hearings for Supreme Court nominee Amy Coney Barrett next week, demanding mandatory testing and that “every Senator and relevant staff must have negative tests on two consecutive days and have completed the appropriate quarantining period” during the hearings.