Tunisian hospitals struggling to cope with rise in Covid-19 cases 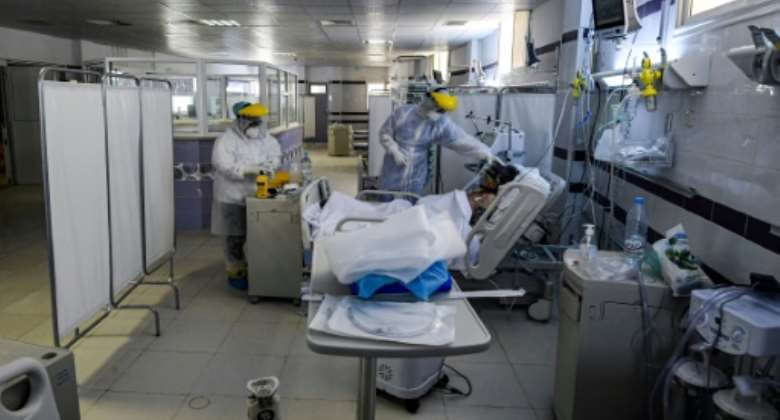 Nurses wearing personal protective equipment care for an intubated Covid-19 patient in an intensive care unit at a hospital in the town of Gabes in southwestern Tunisia. By FETHI BELAID (AFP/File)

Tunisian authorities have warned that hospitals are struggling to cope with an influx of Covid-19 patients and urged residents to respect anti-virus measures to avoid another lockdown.

"If we don't manage to flatten this curve, which is really going up, we risk being overwhelmed," Dr Hechmi Louzir, spokesman of the scientific committee for the fight against Covid-19, told AFP.

"The capacities of the Tunisian health system have not yet been saturated but we are starting to have some problems" in greater Tunis and the coastal city of Sousse, he said, warning of "a lack of human resources" in intensive care units.

Louzir said 345 Covid-19 patients were hospitalised, and 120 of them required oxygen support, as of October 1.

Tunisia, which had virtually contained the pandemic at the end of June, recording some 1,000 cases and 50 deaths, lifted most of the restrictions over the summer.

But the number of confirmed cases has now reached 20,000, including nearly 300 deaths.

On Friday, Health Minister Faouzi Mehdi said field hospitals were to be set up in several cities to help manage the rise in cases but also called for vigilance in respecting health protocols.

"The rigorous application of the measures taken by authorities is necessary but we are counting on the sense of responsibility of citizens," he said.

Obligatory mask-wearing in enclosed public spaces was imposed in early August but has been widely ignored by the public and many officials until recently, prompting many Tunisians to call for stricter enforcement of measures.

Prime Minister Hichem Mechichi has ruled out a nationwide lockdown such as was imposed in the spring so as not to put further pressure on Tunisia's beleaguered economy, but localised lockdowns are on the table.

A curfew was imposed Thursday in the coastal regions of Sousse and Monastir and some areas around Sidi Bouzid, in the interior of the country, with the suspension of weekly markets and the closure of venues.