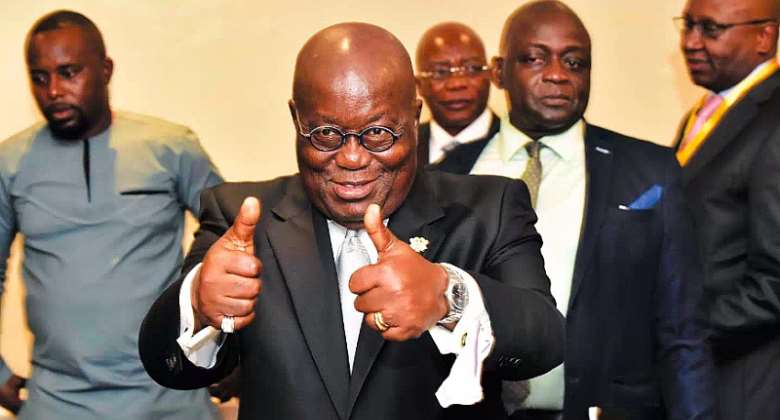 No doubt, the incumbent president of the Republic of Ghana deserves another mandate to serve the good people of Ghana who were left at the mercy of crocodiles in the Lions’ den under the previous uncared for NDC administration. He has performed creditably in his first tenure as Ghana’s president above the expectation of discerning Ghanaians who are not wearing wood glasses and for that matter believe strongly he has a lot in his sleeves to offer our dear nation and its citizenry. Looking at his exploits in leadership ever since he took the mantle from the erstwhile John Dramani Mahama led administration which caused majority of Ghanaians pain and agony through the ghost called “Dumsor”.

Ghana Blessed With A Vissionary And A Generational Thinker

Ghana in 2016 needed a great change to have a courageous and visionary leader who will have the plight of the citizenry at heart and will be ready to share the national cake evenly through a social intervention like the Free SHS policy meant for all BECE candidates. Ghanaians should be thankful to God for blessing them with a good and caring leader in the caliber of His Excellency Nana Addo Dankwa Akufo Addo who is a generational thinker that will assure them value for their votes cast. He has done what Napolean could not do ever since he assumed power and there is an old adage which says your good works will follow you wherever you go and like the Akan saying that goes like “ Nea ope adee ako kotoko no yen di no aboro”, “Nea oforo dua pa no na ye pia no”.

The president has diligently served the good people of Ghana in truth and sincerity and it is only the doubting Thomas’s that commend him in their minds and heads for doing a yeoman’s job, but when they have the chance to talk on any platfom they claim he has not done anything as at a time when parents who cannot afford their wards SHS school fees have not been bothering them anymore. Another election year is just around the corner and it is befitting for Ghanaians to give Nana Addo Dankwa Akufo Addo four (4) more years to do more as coming events cast their shadows and it will be suicidal for Ghanaian electorate to allow the NDC to throw dust into their eyes to change someone who promised them fish and has not given them stones.

Vissionary Leaders Can Do The Unthinkable

He is a man of valour, God fearing, honest, loving, caring, humble, kind, and open minded, sociable, approachable, trustworthy, compassionate and very respectful to both young, old, rich and the poor. Ghanaians who have had the chance to interact with him can attest to the fact that he is everybody’s man. One special thing we should not lose sight of is that he resumed office at a time when the NDC had “eaten all the meat leaving only the bones this left the former president no option than to go to IMF for a policy credibility or bailout which worsen the plight of Ghanaians. Surprisingly, when he assumed office he was under a tight IMF conditionality which prevented the NDC from employing our graduates and yet his good government was able to employ our unemployed university graduates because he dreams big.

It’s pathetic the NDC boast they are social democrats and it may interest Ghanaians to know that in their last eight (8) years in office had absolutely nothing to show as a social intervention policy to help reduce the burden of the good people of Ghana.His excellency Nana Addo Dankwa Akufo Addo has proven beyond all reasonable doubt that he is a perfect gentleman who promises and delivers to the good people of Ghana. His mandate is divine that is why God has guided him to stand firm to focus on his good governance and policy delivery in this difficult times when the whole world is battling with the common enemy known as SARS- Cov-2 which has caused loss of lives and jobs in the advanced countries that have the needed PPE’s and other improved medical logistics for their frontliners. He has never tried to play on our intelligence by looking at our faces to tell us when it comes to election politicians must lie to get our votes.

The Youth Of Today Are The Future Generation

There is a clear and unstoppable divine signs and backing propelling the president till date and he has not accomplished his God-sent service to the good people of Ghana and he is not tired to serve the citizenry that is why he needs another 4-year term to do more. He believes that God in his infinite wisdom blesses people to be a blessing unto others that is why he has taken up the challenge to making sure every Ghanaian will have a feel of the national cake by using proceeds from our God-sent oil. I find it difficult to undertand his political opponents the NDC who claimed they brought the idea of Free SHS policy in Ghana’s constitution turn aound to say it is not feasible just because they had no idea of how to fund it. It’s disheartening when I hear the NDC communicators making noise about the current government using the Heritage funds in financing the Free SHS policy knowing very well the younger generation are the youth we see today and not the ones not yet born.

Ghana under the watch of the previous regime suffered a lot due to power crisis ( dumsor) where lots of companies collapsed leading to majority of Ghanaian employees being laid off. It may interest Ghanaians to know the story would have been different if this dreadful pandemic happened under the previous NDC “yentie obia”administration, the death toll will be high because his only option would be bringing our brothers and sisters studying in China back home. We had an insensitive leader who could not solve the power crisis but thought it wise to increase electricity bills as at the time we were in total darkness. Today we have a compassionate and sensitive leader who has seen the need to cushion the good people of Ghana in this difficult times by offering us free water without paying a pesewa till the end of the year that is a form of putting money into our pockets. He has also absorb 50% of the electricity bill his critics a benefitting and yet claiming there is no truth about it.

Some Projects Under One District One Factory

At this juncture it will be unwise if I don’t let Ghanaians know some of the projects he has constructed in his first year in office that would have taken his political opponents more than fifteen (15) years to do because they cannot gather the courage to do it in this Covid-19 pandemic crisis. Surprisingly, the current NPP administration headed by Nana Akufo Addo has been able to set up lots of projects under One district, One factory and One Village One Dam. Potato Processing factory at Gomoa, Kwahu Organic Ginger Factory, Fertilizer Producing Factory –Suhum and Dahwenya, Tomato Processing Factory- Shai Osudoku, Multi Fruit Processing Factory –Sabin Akrofuom, Ekumfi Pinneaple Juice and Adaklu Rice Factory. To mention but only a few are the Pwalugu Multipurpose Dam, 439 Small –earth dams are under construction and a community-owned irrigation policy and rehabilitating schemes in the North and Afram Plains has attracted massive effort and resulted in developing a holistic plan to provide farmers and hoseholds, especially in the North access to water all year round.

The Battle Still Remains The Lord’s

Upon all the good things he has done so far for Ghanaians he has never blown his own horn but has kept silent and want the projects to speak for themselves because they are eye- marking.The good service and works done so far by the sitting president and his abled apostles talks about one thing that is renew my mandate for another four (4) years for me and my team to accomplish my divine mission for mother Ghana and its citizenry. Voting for him alone makes his mandate and vision incomplete that is to say as Ghanaians renew his mandate so shall they vote for all his Parliamentary candidates who have got the party’s blessings and not the independent candidates whose agenda will draw the party backwards. There is an Akan saying which goes like “ Se afa ne afa nka a na enkyere se abontenefuour mbefa nko”. Victory 2020 is assured in the spiritual realm and it will be made manifest physically since the battle still remains the Lord’s battle. INSHA ALLAH Nana Addo Dankwa Akufo Addo and NPP will be the head and not the tail.