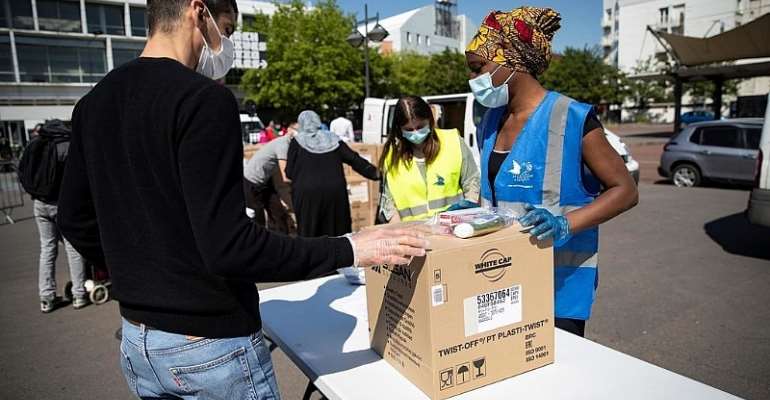 The French charity Secours Populaire has rung alarm bells with their new report which shows a huge increase in the number of people requiring fooda aid during the Covid-19 lockdown in levels not seen since the Second World War.

Secours Populaire said that one out of two people who came for food handouts during the two-month lockdown, from March to May, were new faces.

During the confinement period, the charity recorded 1.27 million people who came to collect food at one of their branches.

This compares to 3.3 million across the whole of 2019, according to a new report, carried out by polling agency Ipsos, and released on Wednesday.

“This is a shocking figure,” Henriette Steinberg, general secretary for the charity told AFP.

“But I'm afraid that this figure will continue to rise.”

According to the study, one in three people in France suffered from a loss of revenue due to the Covid crisis – 16 percent of them said it was a substantial loss.

Some 57 percent didn't go on holidays during the summer this year, one out of four said it was due to financial reasons.

Among them, 61 percent earned less than 1,200 euros per month, and 49 percent of them were blue collar workers.

“What we are concerned about in particular is the closure of small businesses, in construction or food, which represent many jobs, and they are obliged to let people go,” Steinberg says.

The lockdown period also accentuated the inequalities in terms of schooling and access to equipment such as computers, printers and an internet connection.

“Cramped living conditions meant that many could not study in a calm place,” the organisation said, adding that they estimated some 500,000 students dropped out of school entirely.

Those older students dependent on small jobs to earn an income to pay for their studies were particularly affected by the lockdown.

“We haven't seen a situation like this since the Second World War," Steinberg continues, "and it is urgent that we help all these people.”

“Not only do they not have enough too eat, they can't pay their rent nor their bills.”

The many faces of poverty

"The new faces of poverty are the former employees who lived discreetly but who made ends meet, and today they can't even find enough to eat.”

Samuel Lacaze-Michel, a 36 year-old, found himself going from a comfortable salary at 4,000 euros to next to nothing when the crisis hit and he was unable to sign his contract waiting tables in a luxury restaurant.

He admitted he was grateful that Secours Populaire were there to help him with food when the going got really tough.

“At least they didn't let me die of hunger,” he said.

Kab Niang, a manager for Secours Populaire at Paris * university is also shocked at the increase in food demand during lockdown.

He delivered 1,800 food parcels to students, compared to around 50 per month prior to the crisis. He sometimes said there were 250 orders in one day.

The Banque of France predicts that a further 800,000 jobs will disappear by the end of the year.

According to the United Nations, on a global scale, the pandemic is expected to push more than 130 million people into poverty and hunger by the end of 2020.