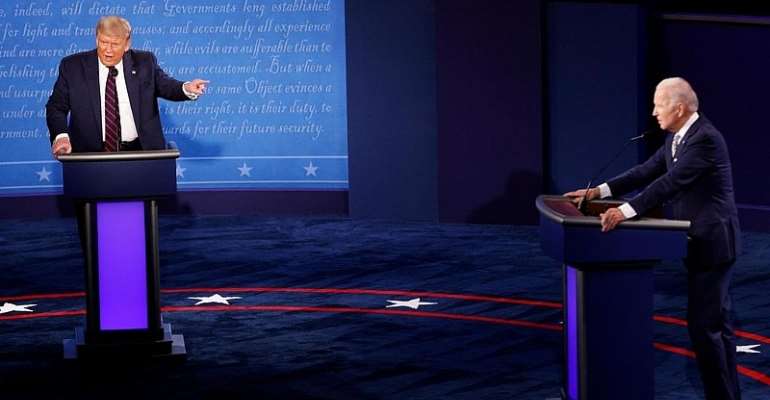 It was messy and there was a lot of shouting, but President Donald Trump and Democratic challenger Joe Biden managed to touch on some of the crucial issues facing American voters during their 90-minute debate, including the coronavirus pandemic, healthcare and the economy.

Political observers expected the Republican incumbent to come out swinging, but it was the 77-year-old former vice president who ended up landing some of the toughest insults of the night, calling Trump a "clown" and a "liar."

"Everything he's saying so far is simply a lie. I'm not here to call out his lies," Joe Biden roared at one point.

At another moment, amid constant interruptions by the president, which angered even moderator Chris Wallace, Biden retorted: "It's hard to get any word in with this clown. Excuse me, this person."

At one point Biden said, exasperated: "Will you shut up, man?" -- which immediately was marketed by his campaign on T-shirts.

Biden sharply criticised of Trump's record on the Covid-19 epidemic, which has killed more than 200,000 Americans, accusing him of failing to protect them because he was more concerned about the economy.

“He panicked or he looked at the stock market,” Biden said of Trump, who has pushed for states to reopen their economies and played down the threat of the pandemic.

“A lot of people died and a lot more are going to die unless he gets a lot smarter, a lot quicker,” Biden said.

Trump objected to Biden using the word “smart” and defended his approach on the pandemic, claiming he did “a great job” and that "millions" would have died had his challenger been in office.

'Less tax than a school teacher'

After a bombshell report from The New York Times indicating that Trump paid almost no federal income tax in both 2016 and 2017, the issue was bound to come up.

Biden slammed Trump for taking advantage of the tax code, saying he "pays less tax than a school teacher".

When Wallace asked Trump to directly say whether he had paid more than $750 in income tax in those years, not in any other taxes, he at first deflected and when pressed, said he had paid "millions of dollars."

"Show us your tax returns," said Biden, who released his own 2019 return before the debate in Cleveland, showing he and his wife had paid nearly $300,000.

"You'll get to see it," Trump replied, without saying when.

Wallace asked both candidates to comment on the race tensions that have convulsed America in recent months, following a series of deaths of African Americans at the hands of police.

When the moderator asked Trump if he would condemn "white supremacists" and ask them to stand down, Trump said he was "willing to do that".

The Proud Boys, a far-right extremist group, then appeared to adopt the phrase, with one known social media account posting a logo that read "Stand Back, Stand By."

Continuation or transfer of power

As the raucous debate wound to a close, Wallace asked both men if they would pledge to honor the election results. Trump has recently failed to explicitly guarantee a peaceful transfer of power, should he lose on November 3.

"We might not know for months," Trump said, adding later: "This is not going to end well."

"I'm urging my supporters to go into the polls and watch very carefully," he said.

Biden pledged to respect the results "after all the ballots are counted".

Covid-19: Hassan Ayariga under life support after ridiculing...
27 minutes ago

What evil men mean for wickedness God turns it around for go...
42 minutes ago