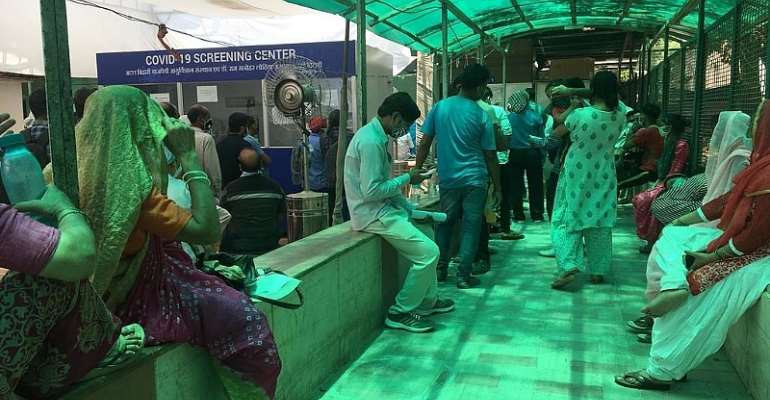 India's coronavirus tally has crossed the 6 million mark after 82,170 new cases were reported across the country, giving the sub-continent the world's fastest infection rate. The number of Indian deaths from the disease is approaching 100,000.

With the latest million infections coming in 11 days and the number of deaths from the disease at over 95,540, new infections in India are currently being reported faster than anywhere else in the world.

The country's case numbers have been rising swiftly over the past few months, adding 80,000 to 90,000 fresh infections each day since India started reporting the world's highest daily rises from late August.

From the first Covid-19 case recorded in India on 30 January, it took six months for the country to reach a million infections. However, the rise has been rapid since then and it has taken just two more months for India to reach 6 million cases.

“I think we have reached our peak and from the epidemic stage we will now reach the endemic stage by March 2021,” the country's top virologist, Dr Jacob John, told RFI.

“By the government's own yardstick for every detected infection, there are 80 to 100 undetected cases in a country as huge as India. There could be 480 to 600 million cases,” added John.

The continued march of the virus has been particularly grave in the southern state of Kerala, once lauded globally for its effective containment of the virus. On Sunday, almost 7,500 people were found to have tested positive for the virus and the state has, so far, recorded more than 175,000 confirmed infections.

Kerala has added almost exactly 100,000 cases so far in September, which is more than all but six states in the country. Almost one third of these have emerged in the last five days.

Health minister K. K. Shailaja on Sunday said a second Covid-19 wave was sweeping through the world and warned that if Kerala continued its relaxed irresponsible ways the state might be forced to impose extreme preventive measures, even a second lockdown.

"At one stage, Kerala's Covid-19 prevention was far advanced. However, certain irresponsible behaviour that should not have happened, hampered prevention,” said Shailaja in a televised address.

According to the Indian Council of Medical Research, the country's top medical body, over 72 million tests had been conducted as of Sunday.

Prime Minister Narendra Modi called on people to continue wearing face masks when venturing outside of their homes.

"These rules are weapons in the war against corona. They are potent tools to save the life of every citizen," Modi said in his monthly radio address.

With trains, metros, domestic flights, markets and restaurants allowed to operate with restrictions, the government is now faced with working out the guidelines for the fifth phase of unlocking the economy further.

Hindu festival season about to begin

The Unlock 5.0 guidelines also assume significance because they are expected to be applicable throughout October — when the festival season begins. The Hindu festivals of Navratri, Durga Puja and Dussehra are in October, and businesses are expected to pick up during this time.

India has the second-highest number of coronavirus cases, behind the United States where infections exceeded 7 million last week. India, however, topped the global chart in terms of virus recoveries.

The only positive statistic is India's case fatality rate - the proportion of people who have died among all confirmed cases. This stands at 1.5 percent and is less than half the global average, currently 3.2 percent.